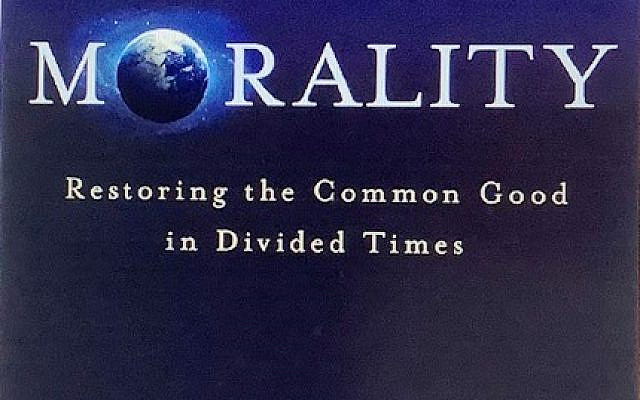 My review of  “Morality:  Restoring the Common Good in Divided Times”  by Rabbi Lord Jonathan Sacks

Rabbi Lord Jonathan Sacks’s new book, Morality:  Restoring the Common Good in Divided Times is an impressive tour d’horizon of the state of the western world – the US and the UK in particular – at the end of the second decade of the 21st century.  Rabbi Lord Jonathan Sacks, the UK’s Chief Rabbi for 22 years, subjects western civilization to a detailed and acute analysis, and concludes that in the course of their evolution, modern societies have veered far from the principles that for millennia bound nations together.

In particular he finds that whereas historically a nation’s moral sense was lodged in its individuals and communities, successive generations have progressively handed it over to the state and the market-place.  While both have achieved some positive benefits for their societies,  neither can provide the moral compass that helps individuals and communities to live meaningful lives.

Sacks brings this thought down to the simple disparity between “We” and “I”.  He sees an inexorable rise of the “I” concept over the past 40 or 50 years, highlighting so-called “identity politics” as one obvious manifestation.  Increasingly political campaigning has degenerated from considering the needs of the nation as a whole, to concentrating on the interests of a series of self-identifying minorities.  This phenomenon has resulted in what Sacks calls an “assault on free speech” in the social media and even in universities, originally conceived as bastions of freedom of expression and the pursuit of truth.  Opinions at variance with what minorities hold to be inviolable are being silenced.  Increasingly only those parroting “acceptable” opinions are being allowed a voice.

In attempting to define what he means by “morality”, Sacks concentrates on his “We-I” contrasting views of how to live the good life.  “The “We” basis has fallen into decline,” he maintains, with many an example to prove his point, and the “I” is at the heart of the new morality.  “Our children and grandchildren are paying the price of abandoning a shared moral code”.

In a recent interview, he explained that what made him put pen to paper was his sense that the West is in dark times, and that we have lost sight of the common good and been seduced by individualism.

The loss of a sense of “we” – what Sacks calls cultural climate change – was caused, he says, by the social revolution of the 1960s, the economic upheaval of the 1980s, and the recent social media revolution with its focus on the presentation of self.

But Sacks was writing in what might be designated the “BC” era – Before Coronavirus.  Many of the deficiencies that he correctly identified as dominating our world up to January 1, 2020 were swept away in the unprecedented pandemic era.  The media of the time is filled to overflowing with examples of the “We” approach sweeping all before it.  Selfless devotion to community interests manifested itself wherever the coronavirus gained hold and multiplied.  In the UK the bitter divisions that had dominated the Brexit debate only a few short weeks before simply faded away.

Many people believe that once the pandemic has retreated  the world will never be the same again.  If this proves to be the case, Sacks will surely rejoice that out of evil, the good that he is advocating emerged – that it was lying dormant, only awaiting an opportunity to manifest itself.  He says: “We need to recover the sense of ‘all-of-us-together’”.  That much-to-be-wished consummation was surely achieved in the periods of lockdown, self-isolation, and soaring hospital admissions, when literally thousands of people, both professionals and next-door neighbours, came forward to bring relief and comfort to people in difficult circumstances.  As Sacks says: “Morality is the capacity to care for others.   It is a journey beyond the self.”  If he saw this quality diminishing in the BC world he was describing, he would surely recognize that it was in full evidence during the pandemic.

How much of this traditional morality – previously atrophied – will survive is a matter for speculation.  Perhaps history will record that it blossomed but briefly, and western society returned unchanged to the BC world that Sacks describes.  But perhaps the changes were too profound to be kicked into the side grass, for they were previously unimaginable.

One area Sacks singles out for scrutiny is economics.  He insists that a nation’s economics needs an ethical dimension, that markets were made to serve people, not the other way around.  Could anyone have envisaged governments borrowing billions in order to pay wages for workers who were unable to earn a living, and loans and mortgages for companies forced out of business by the virus?

It is not impossible that the old BC concept of what is owed by government to its citizens has undergone a sea-change, and can never return to what it was.

Sacks maintains that the future of western civilization depends on the whole population becoming involved in rebuilding our common moral foundation. That, he asserts, is how the general public will come to understand that a nation is strong when it cares for the weak, and rich when it cares for the poor.  It could be that the coronavirus pandemic that has shaken us to the core has also set us on the path towards achieving Jonathan Sacks’s worthy objective.

About the Author
Born in London and educated at Oxford University, Neville Teller has worked in advertising, management, the media and the Civil Service, and has written about the Middle East for more than 30 years. He has also written consistently for BBC radio, and in the Queen's Birthday Honours in 2006 was awarded an MBE "for services to broadcasting and to drama.” He made aliyah in 2011.
Comments