“Lord of the Flies” was on television last week and for the first time since I first read the disturbing novel nearly 50 years ago, I thought that it might be realistic.  William Golding describes  children, left without adult supervision, turning into savages, who torment and terrorise each other and kill without remorse. Most of them have no moral compass. Left without anyone to rein them in, they are easily enticed or bullied by manipulative, charismatic personalities into behaviour that is shocking. The peer pressure outweighs any moral education they have received.  It is a brave few who are morally resolute and resist. They are targets of the larger group. 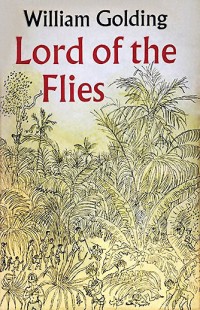 The original UK Lord of the Flies book cover

The “Lord of the Flies” is a pig’s head, set on a stake, which some of the children begin to imagine is talking to them. The symbol is effective because the children have already internalized the idea of a “beast” which is terrorizing them. The “beast” is actually fear – but takes on numerous external guises which can be shared through the power of suggestion. While some of the older children know that the beast does not exist and that the pig’s head is nothing more than a symbol they have created, they behave as if both have authority. The more they experience the power that comes from lawlessness or, rather, from creating their own laws, the more they see this as justified and the idol they created actually attains authority. Power becomes a substitute for morality. Right and wrong are determined by what is possible and provides excitement. Fear is a driving force – but fear is transformed by adrenalin and becomes indistinguishable from joy in the minds of these children. There is no envisioning of a future. Everything is for the thrill of the moment.

The current wave of violence throughout Israel and the West Bank is different from past “intifadas” because it is mainly perpetrated by children.  Like the group stranded on the island in the Golding novel, these are children who have been enticed or manipulated into behaviours that disregard the feelings, indeed the humanity, of others. Their “beast” is created and shared through the social media. The symbol – the Lord of the Flies – is the perceived threat to Al-Aqsa and it no longer matters that the threat is their own creation.  Their fear is transformed into an ecstatic state as adrenalin is pumped.

They seem to have complete indifference to the human lives they are taking or threatening and in most cases no regard for their own lives, either. They cannot envision a future so the consequences of their actions on themselves or their society are not relevant. There is no-one strong enough to control these children or no-once concerned enough about these children to shield them from the violence which they perpetrate on themselves and others. Nobody inspires in them hope for the future and they cannot envision one – so everything is about the moment.

I am so saddened that these children are so exploited and manipulated. None of the Palestinian leadership is providing them any hope for the future; Israeli Arab politicians are enjoying the notoriety in Israel and international fame that they are able to garner by playing off the tragedy of the children who die; their parents have either endorsed the sacrifice of their children or have relinquished their authority as parents to other forces; too many Muslim religious leaders (or those usurping leadership) cynically encourage the sacrifice of young human life to the “Lord of the Flies.” Educators and peace-activists have lost their authority. Unlike the more appealing voices, they speak about a future and offer no immediate thrill.

In Golding’s novel, the violence is only brought to a halt with the arrival of adult authority. The reader (or viewer of the movie) is left with a distinct impression that, left to themselves, the children would continue their murderous ways. The beast is driving them.  In the “matsav” (situation) here today I cannot see that adult, moral authority willing to step in. I can only hope that it arrives in time. Adults need to set standards. Adults need to use their wisdom and experience. They have to ensure children that the future is in their hands – and that it matters.

“Lord of the Flies” does not deal with the rehabilitation of the children who survive the island on which they are stranded but the reader knows that they will never be the same. Those who have been intimidated and brutalized may never recover. Those who have tasted power are left with the legacy of the pain they inflicted on others – and with the let-down of losing that power. I vividly remember reading Robert Cormier’s “After the First Death”.  This novel does deal explicitly with the damage done to the children who perpetrate violence – not that most of us need a novel to realize that children who have shed blood are damaged permanently by their experience.

Studies on the child-soldiers of Africa (one source is the USIP) have shown that they are unable to form normal relationships many years after they are removed from the violence. Permanent damage is done to the children’s moral and emotional development.  I truly hope that this does not become the reality for more of the Palestinian children – that they are recruited to fight a war that their parents either don’t believe in or don’t want to fight themselves. It is terrifying to think how many children in this conflict have already been damaged. 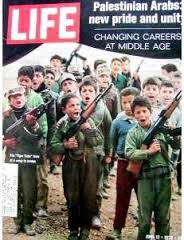 I have never been comfortable with the comment attributed to Golda Meir that peace will come when Arab parents love their children more than they hate us. I believe that Arab parents do love their children every bit as much as Jewish ones love theirs. However, love is insufficient. Tough love is required. Active parenting is required. The first job is to make our children safe. The second is to instill in them hope for the future. Parents need to do this individually and communities need to do this for their young generation.

So many times in Jewish history, especially in the Shoa, Jewish survival depended on hope. Hope trumped the fear. Hope for an alternative reality was more relevant that the current reality.

Academics have commented on the historical factors that have brought us to today’s tense situation – the past. Commentators and analysts provide us with data describing the deprivation and hopelessness of the current generation of Palestinian children – the present. But what about the future? Can it be built with children damaged by violence, by children who have blood on their hands and are morally and emotionally stunted? These children do not imagine a future but adults can.  Will someone help the children see that the future matters? Will someone give them hope?

About the Author
A fifth generation Australian, Peta made Aliyah in 2010. She is Senior Fellow of the Kiverstein Institute, Director of Educational Activities for the Elijah Interfaith Institute, secretary of the Jerusalem Rainbow Group for Jewish-Christian Encounter and Dialogue, a co-founder of Praying Together in Jerusalem and a teacher of Torah and Jewish History. She has visited places as exotic as Indonesia and Iceland to participate in and teach inter-religious dialogue. She also broadcasts weekly on SBS radio (Australia) with the latest news from Israel. Her other passions are Scrabble and Israeli folk-dancing.
Comments
Advertisement