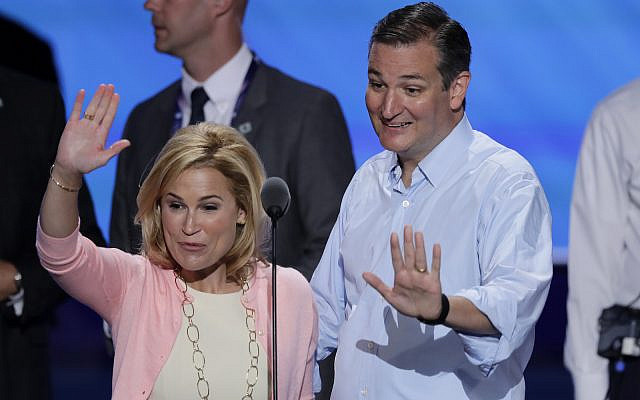 Sen. Ted Cruz, R-Tex., and wife Heidi wave from the podium during a sound check before the third day of the Republican National Convention in Cleveland, Wednesday, July 20, 2016. (AP Photo/J. Scott Applewhite)

Shoshana Zuboff, a professor emeritus at the Harvard Business School and the author of “The Age of Surveillance Capitalism,” recently wrote a powerful piece in The New York Times entitled “The Coup We Are Not Talking About.” In it, she makes the point that we can have democracy, or we can have a surveillance society, but we cannot have both.

I was reminded of her article this week in watching the hullabaloo in the United States over Texas Sen. Ted Cruz’s ill-timed escape from the subzero temperatures and snow of Texas to a vacation in Cancun, Mexico.

I have no intention of passing judgment on Sen. Cruz in this article. He has offered his own mea culpa on why it was irresponsible for him, as the junior senator from that state, to leave Texas in the middle of the coldest and snowiest winter in 50 years, serious enough to force the governor to declare a state of emergency in all of the state’s 254 counties. So I will leave further judgment to his constituents.

However, what made me think about Prof. Zuboff’s article was how the press handled this whole affair. Initially, Cruz told people that he never intended to escape Texas, but that his daughters wanted to take a trip to Mexico and he and his wife just took them there with the intention of coming right back. That story fell apart when research indicated that they had reservations at the hotel for a number of nights, not just one. Okay, good research uncovered the deception. Then the story turns a bit scary.

The media, not satisfied to leave this alone, went digging further, and said that they had proof that the trip had nothing at all to do with their daughters’ wanting to go to Mexico. How did they know that? Because they were able to secure copies of multiple private text messages from Cruz’s wife Heidi Cruz to her friends suggesting that those friends might want to consider joining the Cruzes in their escape from Texas, as they had found a great hotel deal at just $300+ per night in Cancun.

This kind of incursion into the private communication of the wife of Sen. Cruz is exactly what Prof. Zuboff warned about in her article about the epistemic coup that is taking place around us. For those not familiar with the word epistemic, not to worry, I had to look up the definition as well, and it is: “of or relating to knowledge or knowing.” In a word, Zuboff’s point is that every thought we have that we commit to text and dispatch has the potential to be grabbed and misused all without the permission of the writer.

In other words, everything we commit to text or speech and send to someone else is now available to those who control the information (e.g., Facebook, Google, WhatsApp, etc.) and can be accessed and then used for whatever purpose.

Without judging the Cruz case, one can raise a reasonable question as to whether the private texts of Sen. Cruz’s wife should have been available at all to the media researchers who went looking for additional proof that the trip was not part of some long-standing plan. After all, Heidi Cruz thought her communication was between her and her friends. Nobody asked her if it was okay to use that information. She did not give anyone permission to use it. It was simply taken because it was possible to access it and use it for whatever purpose the “surveillance capitalists,” as Zuboff calls them, decided… and that is NOT OKAY! Allowing this kind of intrusion into our personal lives without our permission is a clear manifestation of George Orwell’s predictions in his novel, 1984.

Unless democracy revokes the license to steal and challenges the fundamental economics and operations of commercial surveillance, the epistemic coup will weaken and eventually transform democracy itself. We must make our choice. We may have democracy, or we may have surveillance society, but we cannot have both.

Sadly, we are well on the road to losing democracy but we can and should still act to reign in the prerogatives of those who control the mass of information that circulates in cyberspace. The sooner democratic governments do so, the better off we all will be. Let’s just hope it is not too late.