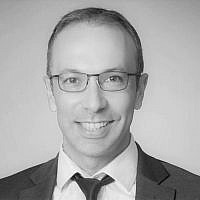 The Blogs
Joe Hyams
Apply for a Blog
Advertisement
Please note that the posts on The Blogs are contributed by third parties. The opinions, facts and any media content in them are presented solely by the authors, and neither The Times of Israel nor its partners assume any responsibility for them. Please contact us in case of abuse. In case of abuse,
Report this post.

Hadas Malka smiled, snapped a selfie, and wished her friends and family Shabbat Shalom. Minutes later she was viciously stabbed to death, cut down in the line of duty – only 23 years young.  You wouldn’t know this from breaking news headlines in the hours that followed. As medics fought to save her life, journalists turned their attention elsewhere.

Border Police Officer Hadas Malka (OBM), fell victim not only to the murderous intent of the terrorist who stabbed her to death, but further to the outrageous treatment we’ve seen from initial news media coverage of the Friday night attack in the heart of Jerusalem; obsessive focus on Israel’s take-down of the terrorists carrying out the attacks.

Notably, the BBC’s reflexive focus on the death of three attackers on this occasion attracted the ire of many who were outraged by the media’s demotion of the terror attacks’ victims (Donald Trump Jr and Israeli Prime Minister Benjamin Netanyahu among them).

Too Little, Too Late

The BBC’s swift correction and apology for the obvious insult to so many – fails to explain how and why such failings persist, almost predictably. The apology from the BBC stated: “We accept that our original headline did not appropriately reflect the nature of the events and subsequently changed it.” So utterly did the BBC fail in this instance that they soon deleted the offensive, biased and misleading original tweet.

The BBC was not alone in denying Hadas and other victims the focus of headlines.

Reuters and the Associated Press were especially guilty, as their headlines were repeated in media outlets around the world, such as ABC News and the Washington Post, which all failed not only their duty of journalistic integrity, but in treating similar terror incidents (in Israel as elsewhere) with a consistent voice, tone, and style.

This consistency is crucial to ensure that readers will conclude and infer accurately the flow of events and intentions of the parties being described in the report. Take, for example, the BBC this past March, reporting on the tragic news concerning an on-duty police officer stabbed to death outside the UK Parliament:

Keith Palmer (OBM), much like Hadas was murdered during his active police service to protect the public. Like Hadas, Keith fought valiantly to prevent further injury and loss of life, as he wrestled with his attacker.

Keith was recognized by the BBC as a 48 year old husband and father. He was awarded a posthumous bravery medal for his ‘Ultimate Sacrifice’ for “confronting an armed terrorist to protect others and Parliament.” The citation says: “His actions provided time for other officers to react and shoot and stop the assailant.” The BBC underscored, and rightly so, the person behind the uniform.

Why the Double Standard?

Will a news reader relate to her as a daughter, friend, public servant making the ‘Ultimate Sacrifice’? Will they learn of the incitement her killers were exposed to by the Palestinian Authority or made aware of the payments that will now be made to their families, recognizing their ‘heroism’?

I don’t believe they will. Ultimately the double standard will lead many to fall into Fatah’s trap of demanding recognition of ‘Israeli brutality’ meted out on teenage Palestinian ‘victims.’ Our recent mock-news feature demonstrating how absurd headlines would appear with the same treatment of terror attacks elsewhere, drives home the point:

In fact I don’t believe the BBC or many other news organizations relate to Israelis as equal partners in the war on terror. Our security forces appear to warrant cold acknowledgment at best when falling in the line of duty, and only then after outrage by media watchdogs and high profile leaders. Twenty-somethings, cut down in the prime of life are somehow less interesting, less heart-rending, when it comes to the format of headlines following terror attacks in Israel.

Herein lies the unacceptable continuation of broken news headlines, misinforming and disenfranchising news readers who are buying a flawed and agenda-driven product they are too quick to trust and too distant from to critique.

But it gets worse.

As my colleagues have previously noted in explaining why headlines matter, headlines actually impact the way we read and remember articles.

Responding to a 2014 study published in the Journal of Experimental Psychology: applied on the effects of misinformation in headlines, Maria Konnikova wrote in The New Yorker:

Psychologists have long known that first impressions really do matter— what we see, hear, feel, or experience in our first encounter with something colors how we process the rest of it. Articles are no exception. And just as people can manage the impression that they make through their choice of attire, so, too, can the crafting of the headline subtly shift the perception of the text that follows. By drawing attention to certain details or facts, a headline can affect what existing knowledge is activated in your head. By its choice of phrasing, a headline can influence your mindset as you read so that you later recall details that coincide with what you were expecting.

In terms of objective journalistic standards, bad headlines can violate one or more of the Eight Categories of Media Bias, the gold standard created by my team at HonestReporting, and used to evaluate and expose media failings.

Whilst Donald Trump Jr asked what terms we might use to call out media on cozying up to assailants, we might all think about news consumers (that’s all of us) as the victims of sub-standard media output.

The media have been exposed once again for their double standard on Israel. They’ve mocked not only the precious memories of those innocents murdered or injured, but denied each and every one of us the professional news coverage we’re entitled to expect.

Hadas Malka’s bravery and the tragic void left in the wake of her brutal murder must be the only first impression gleaned from a headline. The media have a duty to abide by journalistic integrity. We all have a duty to uphold the honor and recognition due Hadas Malka in her ultimate sacrifice – may her memory be a blessing.