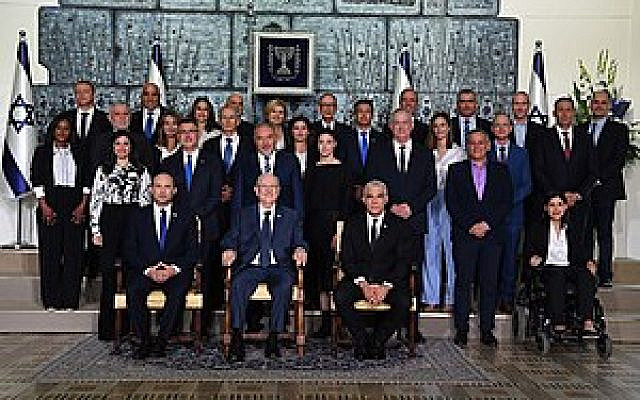 Ministers of the 36th Government of Israel, with President Reuven Rivlin. (Twitter)

In Roger Stone’s political playbook Stone’s Rules, the Michael Jordan of electoral mischief lists “Hate is a Stronger Motivator Than Love” as his 54th rule. The preeminent strategist behind the GOP for the past half-century argues as follows:

While Stone speaks mainly on voters, the current Israeli government seemingly proves the same for the people they elect. There is no love, no positive goal shared between the various conservative, neoconservative, liberal, neo-Marxist, and Islamists factions that make up Israel’s 36th government. This government was formed solely out of hate, personal animosity for Benyamin Netanyahu, who had greatly hindered each of their political careers to that point, and the common will to remove him from Balfour. The hodgepodge coalition persists merely out of fear that its dissolution will see Netanyahu’s return to the premiership.

However, it seems that this pure hate, while effective in the short term, diminishes greatly and rapidly in efficacy over time. The coalition, in its mere one month of governance, has already suffered a handful of embarrassing legislative defeats; failing to renew the Citizenship Law that was renewed annually without issue since 2003, pulling a marijuana legalization bill due to internal opposition and fear of another embarrassing public defeat, and the defeat of a Rabbinate reform bill on the third reading owing to lack of coalition discipline and leadership incompetence. Following that most recent failure, opposition whip and Likud MK Yariv Levin relished, “this is an unprecedented achievement. Just one month has passed since this fraud government was created and time after time we are managing to defeat government bills.”

In keeping with Israeli law, the government must pass a budget within 100 days of its formation or will automatically dissolve. Prime Minister Naftali Bennett and Alternate Prime and Foreign Minister Yair Lapid are fast approaching their September 21 deadline, have reportedly met brick walls within their 60-seat coalition and are negotiating for votes from without, specifically with the Ba’athist Joint List alliance.

Hate can win battles but only love can win wars. Hate fueled the coalition to its initial victory, its formation and removal of Netanyahu, but only love can allow it to be a functional government in and of itself. So far, the government has, largely, been a giant nothing, an occupier of government office space with nothing else to offer, taking opportunities from people who could use these positions for the benefit of Israel. Soon, the government will likely be dissolved, either through failing to pass a budget by September 21 or through a no confidence vote, which Netanyahu is reportedly planning for the week prior during the UN General Assembly, which Bennett and Lapid will be attending and will have to rely on inexperienced party whips and backbenchers to fend off the oppositions’ experienced parliamentarians. All this because the coalition went all-in on hate, winning the battle but setting themselves up for defeat in the greater political war.