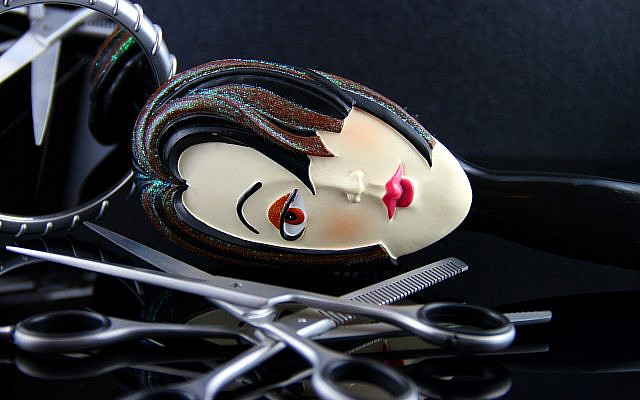 It all started when I realized I wasn’t going to donate a kidney. For a long time, I had been sure I would. Surely the reason why we have two kidneys is so that we can keep one for ourselves and donate the other. And as a universal donor with type O blood, how could I not?

But a family history of diabetes made parting with a kidney unwise, and a personal history of breast cancer made my organs undesirable. I sufficed with encouraging my saintly husband to donate a kidney (he almost did, but that’s another story) and signing an Adi donor card. If I were ever to be brain dead, perhaps my corneas could be transplanted, or my heart. Hearts hardly ever get cancer.

But people often do. And when they are treated with chemotherapy, they frequently lose their hair. I never experienced that, but can imagine how difficult it must be for a woman or child to deal with hair loss on top of confronting a life-threatening illness and the treatments involved. Celebrating the fact that my hair was not yet gray and could still be used for younger people, I decided to grow my hair so as to donate it to an organization that makes wigs for cancer patients. I hoped that the recipient, who might be feeling scared, vulnerable, and unattractive, would feel cloaked in love, knowing that someone gave up a part of herself as an act of altruism.

I was ready for the challenge. Or so I thought. Based on the experience of young girls in my community, who repeatedly donated waist-length hair, I figured it would be a two-year enterprise. In fact, though, it took one year for my layered hair to reach a uniform length, and then another four years to reach the 30 cm (12 inches) braided minimum required for donation, since with each passing year, my hair grew slower and slower.

At first, I loved growing my hair. It reminded me of the rewarding sense of multitasking I had when I was pregnant – whatever I was doing, I was making a baby at the same time. As my dark brown hair grew longer and longer, I was constantly aware of the fact that I was growing my hair for someone with cancer. I could see her in my mind’s eye, breaking into a broad smile as my brown tresses cover her bald head.

For someone whose hair had never passed her shoulders, the longer length was appealing because it seemed feminine and sassy, although I never mastered the hair flip. As a married woman who covers her head, though, it was a skill that was not worth developing.

Unfortunately, as my thick, wavy hair grew longer and longer, my initial exhilaration started to wane. My hair took ages to wash, eons to dry, and forever to straighten. Combing it was an entire evening’s activity. No matter how much I combed, my hair was always knotted. Within seconds of being separated, the strands seemed to long for each other, weaving themselves together into a stubborn tangle and refusing to budge. I was never kempt or sheveled.

As it grew, my hair would get caught in everything – the strap of my handbag, the door of the fridge, my husband’s embrace. After years of looking incredulously at men who had crumbs in their beards, I discovered that the same thing happens at mealtime to women who have long, loose locks (yuk!). And it took a while for me to learn to stuff my hair into a hat before lifting my first-born grandson, after valiant attempts to convince his tiny fists to relinquish their hold on it.

While I was waiting for my hair to grow, I began to encounter the dark side of hair donations. On Facebook, a photo of a table covered in braids that were cut at a hair donation event at a religious girls’ school in Jerusalem launched a heated debate about whether young girls should be subjected to peer pressure to donate their hair, when parting with it may make them feel stripped of their identity, unattractive, and insecure. As the mother of boys, I had never considered that.

Several months ago, a video revealed that Indian women donate their hair to temples thinking that it is going to be used for ritual sacrifices, when in fact it is being sold. In the Orthodox world, wigs made of Indian hair are shunned because the hair is associated with idolatrous practices. Who knew that there are ethical issues involved in Indian hair as well? For the first time, I became aware of the fact that wig buyers who are concerned about exploitation should seek wigs that are ethically sourced.

These Indian women donate their hair as a spiritual offering.But many don't know that their locks will be sold as hair extensions at Parisian salons.

As my hair inched toward the required length, where to donate it became a real concern. Two years ago, a Hebrew exposé in Haaretz revealed that a well-known organization that collects hair to make wigs for cancer patients in Israel actually sells much of the donated hair to finance its operating costs, but does not make that fact clear to the public. After spending five years growing long locks for cancer patients, I did not want to run the risk of walking past my hair on the street, on the head of someone who bought it as a hair extension or as a wig made by a commercial wig-maker. So while supporting operating expenses and activities for cancer patients is a noble cause, I began looking for other organizations where I could be sure that my hair would be used directly for the purpose that I intended.

In the end, I decided to donate my hair to Wigs for a Cause. Headed by Dee Shottland, who makes custom wigs at her salon, Charlotte Couture, in Jerusalem, Wigs for a Cause is a non-profit that collects gently used wigs, refurbishes them, cuts and styles them, and then gives them – free of charge – to women who are undergoing chemotherapy. A cancer survivor herself, Dee repairs the donated wigs with donated hair and distributes the wigs to cancer patients through her salon and through the Israel Cancer Association in Jerusalem. She also provides free wigs to women who have alopecia areata, an autoimmune condition that causes hair loss, and thus responds to a crucial need of women who are not eligible for wigs through other non-profits. This was the place where my hair could do the most good. 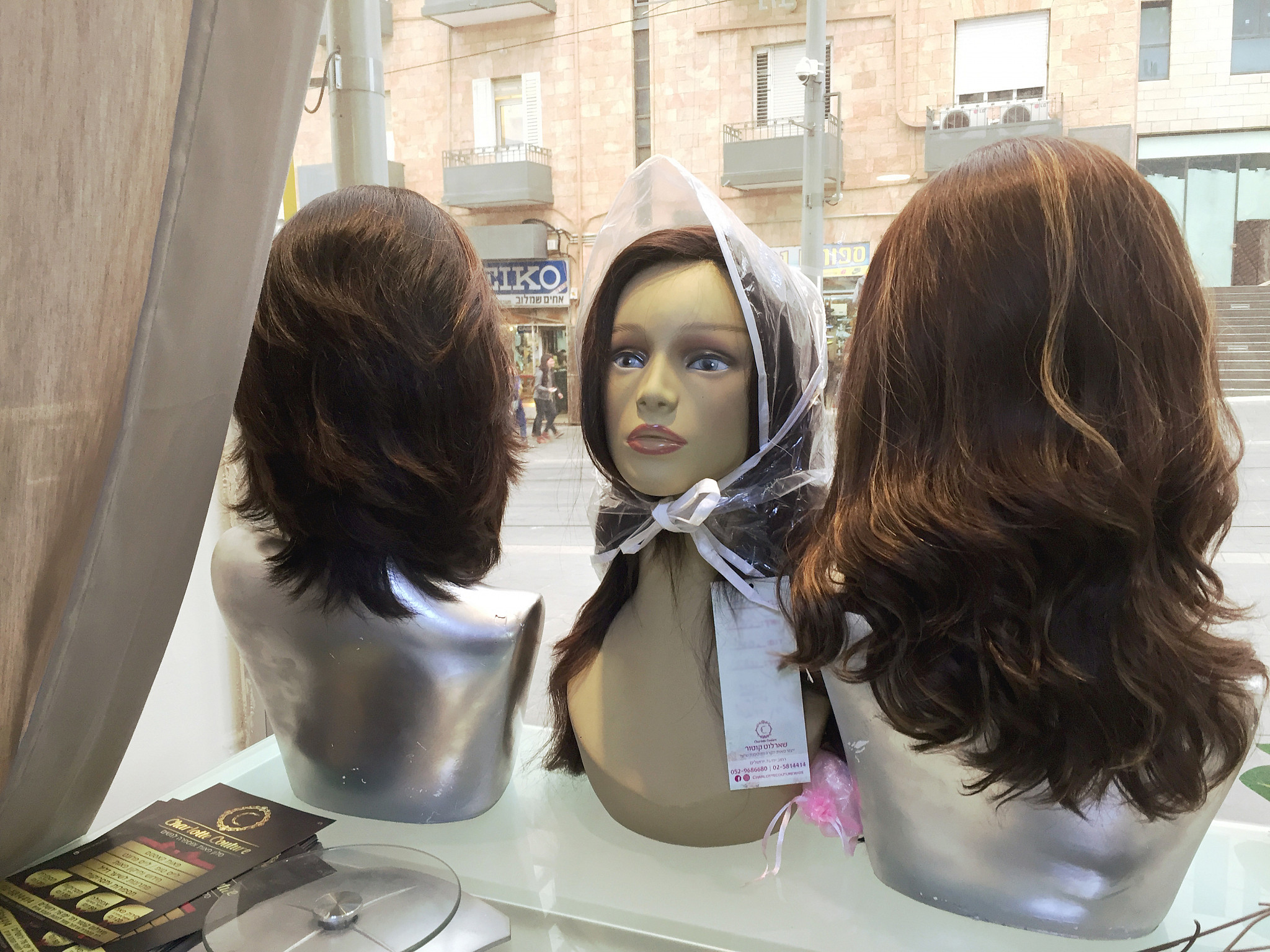 As fate would have it, I walked into Dee’s salon on February 4th and discovered that it was World Cancer Day. Dee said that my braid was the longest pony-tail braid she has ever received for Wigs for a Cause, because when young women grow their hair to the length that I reached, they tend to sell it rather than donate it. She assured me that my hair will help renew several wigs, and gave me a stylish bob that will enable me to donate easily again in the future. Will I do it again? Probably not. I will leave that to people who love having long hair, and are big-hearted enough to donate their hair to others, who will love it as well. And in the meantime, I will savor the thought that my hair is being used for parts, joining on with donated wigs to bring care, comfort, and an extra measure of love to women who need that special embrace. 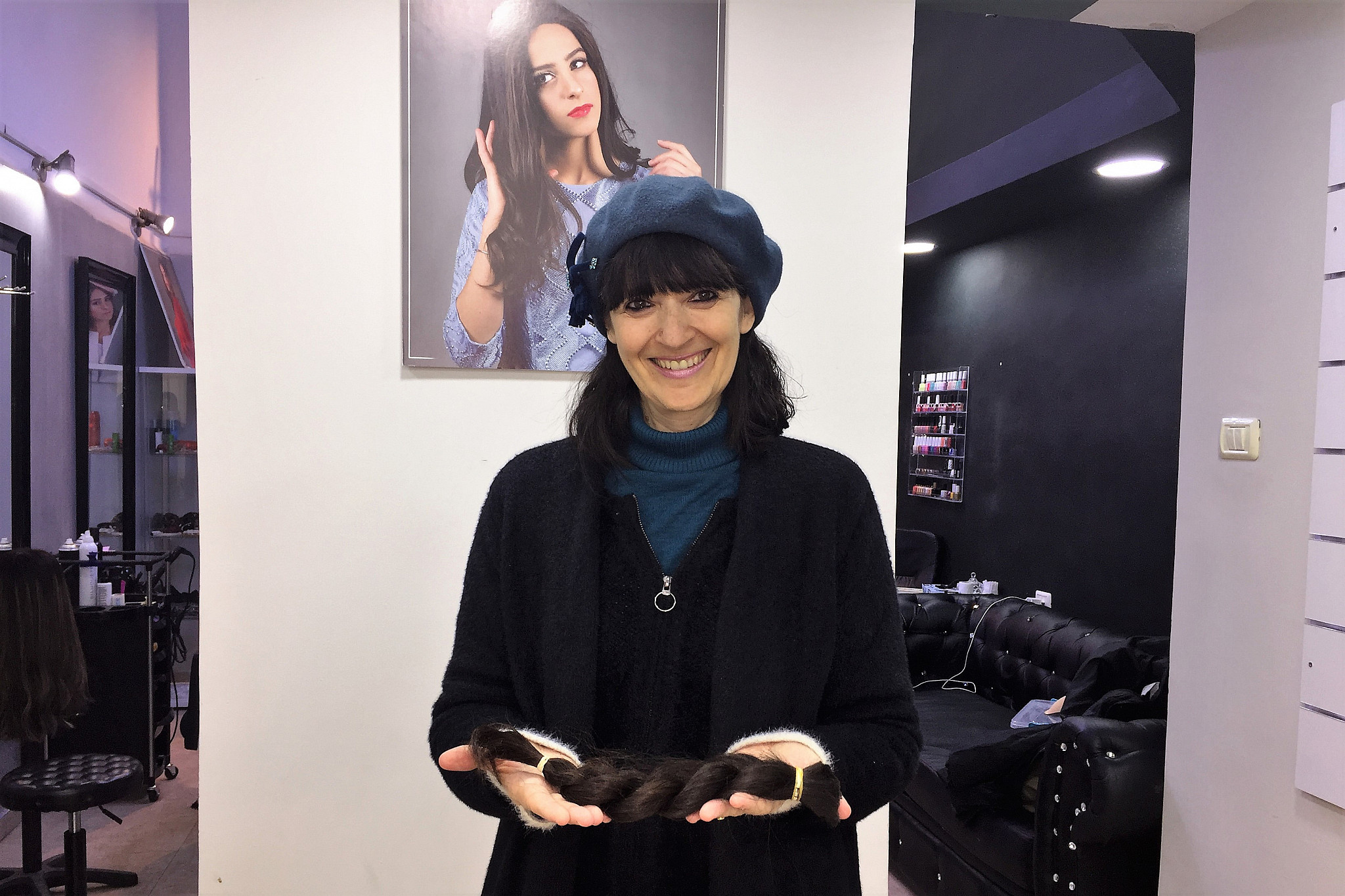 Note that a sentence in the second paragraph of this blog, which originally said that hearts don’t get cancer, was corrected on February 6, 2020.