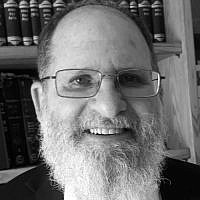 The Blogs
Aryeh Siegel
Apply for a Blog
Please note that the posts on The Blogs are contributed by third parties. The opinions, facts and any media content in them are presented solely by the authors, and neither The Times of Israel nor its partners assume any responsibility for them. Please contact us in case of abuse. In case of abuse,
Report this post.

Rabbi Akiva says: “This is a great general principle of the Torah.”
[Midrash Raba, Genesis Ch. 24]

“…God asks of us to love. This may sound simple, but it turns out that it doesn’t come naturally; and it takes time and effort to learn to do it. To love others, we must uncover hidden forms of our self-interested concerns. Only then can we direct our thoughts, feelings, and actions toward giving to others. In addition, we need to recognize the aspect of divinity in each human being we encounter. When we see the greatness of others, this awakens within us our love for them. In particular, the greatness in their aspect of divinity connects our love of them to a love of God.”*

The “perennial philosophy” claims that all religions share a single goal whose realization is the purpose of human existence. Each religion enclothes a particular tradition that teaches us to be more loving, in imitation of that Force that created the world. In his essay* “The Giving of the Torah,” Rabbi Yehuda Ashlag (Baal Hasulam) demonstrated that Judaism’s path toward that goal is by way of  internalizing the full meaning of the verse in this week’s Torah portion: Love your fellow as yourself.

I was introduced to religion by Huston Smith, one of the world’s most influential figures in religious studies, who was a major proponent of the perennial philosophy. In a letter written by him in 1963,  he lists versions of the Golden Rule as they appear in several of the world’s religions. The letter was folded in his copy of the book “The Essential Unity of All Religions” which he bequeathed to me in 1973 before he moved from MIT to Syracuse.

This is probably the first publication of Huston’s formulations of the Golden Rule:

Zoroastrianism
That nature only is good when it shall not do unto another whatever is not good for its own self.

Judaism
Thou shalt love thy neighbor as thyself.

Hinduism
Men gifted with intelligence should always treat others as they themselves wish to be treated.

Confucianism
Do not unto others what you would not they should do unto you.

Christianity
All things whatsoever ye would that men should do to you, do ye even so to them.

Buddhism
In five ways should a clansman minister to his friends, and familiars – by generosity, courtesy, and benevolence, by treating them as he treats himself, and by being as good as his word.

*The initial quote above is from the introduction to “Giving – The Essential Teaching of the Kabbalah” (Urim Publications 2020). That book also contains my translation of Baal Hasulam’s essay mentioned above: “The Giving of the Torah.”
http://www.urimpublications.com/giving-the-essential-teaching-of-the-kabbalah.html

About the Author
Aryeh Siegel is a Diplomate in Logotherapy (Viktor Frankl Institute of Logotherapy) with a Ph.D. in philosophy of logic and metaphysics (M.I.T.). Having studied for over 20 years the Kabbalah of Rabbi Yehuda Ashlag (Baal Hasulam) from Rabbi Avraham Mordechai Gottlieb, he publishes articles and delivers lectures on the philosophy of Kabbalah and Logotherapy. As translator and editor, he has published the book "Giving - The Essential Teaching of the Kabbalah" (Urim Publications, 2020), which includes essays by Baal Hasulam with Rabbi Gottlieb's commentary.
Comments