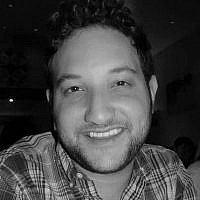 The Blogs
Brett Cohen
Apply for a Blog
Please note that the posts on The Blogs are contributed by third parties. The opinions, facts and any media content in them are presented solely by the authors, and neither The Times of Israel nor its partners assume any responsibility for them. Please contact us in case of abuse. In case of abuse,
Report this post.

After more than four and a half hours of debate on Tuesday night, March 25th, 2014, Loyola University Chicago’s student government (USGA) yet again passed a divestment resolution singling out Israel.

The resolution passed with 12 in favor, 10 opposed, and 9 abstentions. This is a markedly different result from last week’s railroaded-through resolution which passed 26-0-2.

What is especially telling is that there are 9 confirmed members of Students for Justice in Palestine on the USGA board. Essentially, this means that SJP was only able to convince 3 senators of their bigoted views, while pro-Israel students valiantly swayed 17 senators to change their votes to no or abstentions.

What this shows, is that when actual debate happens and light is shown on the BDS movement, sensible people don’t support it.

The next step for pro-Israel students is to convince the USGA President, Pedro Guerrero, to veto the resolution. A presidential veto can only be overturned with a 2/3’s vote, which is not likely to succeed.

Tellingly, this vote only passed with SJP’s built-in plurality in the student government. Much like the anti-Israel UN resolutions resolutions they cited in their divestment bill, their victory is based on abuse of democracy. In the UN Human Rights Council, where such stalwarts of democracy like Cuba, China, Syria and Iran reign supreme, human rights discourse becomes a mockery of itself.

My suggestion to Loyola’s pro-Israel students is to go on the offensive. Present a bill to USGA setting out fair, researched criteria for divestment based on independent verification like Freedom House, that consistently gives Israel its highest ranking. That way, if they want to boycott Israel, they will have to boycott over 100 countries with far worse records first.

In any case, this is only the beginning of this battle at Loyola. SJP has poked a sleeping lion, and the newly galvanized pro-Israel community isn’t going to take this lying down.

Loyola University President Pedro Guerrero has vetoed the divestment resolution, citing:
1. The undemocratic way in which it was introduced
2. The harm caused to Loyola’s community by the resolution
3. That divestment and socially responsible investment are two separate issues which the resolution conflated.

The USGA can override his veto with a 2/3 majority vote. However, this is unlikely to happen given the breakdown of yesterday’s vote. 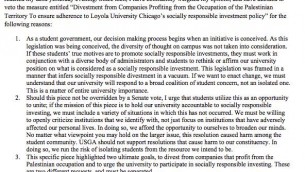 Veto Letter by Pedro Guerrero
About the Author
Brett Cohen lives in Tel Aviv, Israel and is currently pursuing a Masters Degree in Archaeology and Cultural History at Tel Aviv University. A native of the South Side of Chicago, Brett graduated from Loyola University Chicago in 2008 with degrees in Political Science, International Studies, and Anthropology. From 2008-2016 Brett was a leader in the pro-Israel campus movement in North America, serving as Executive Director of Campus Affairs for StandWithUs. He has also been a long time campaigner for LGBT rights, pioneering marriage equality in Illinois by marrying his husband in 2012.
Comments