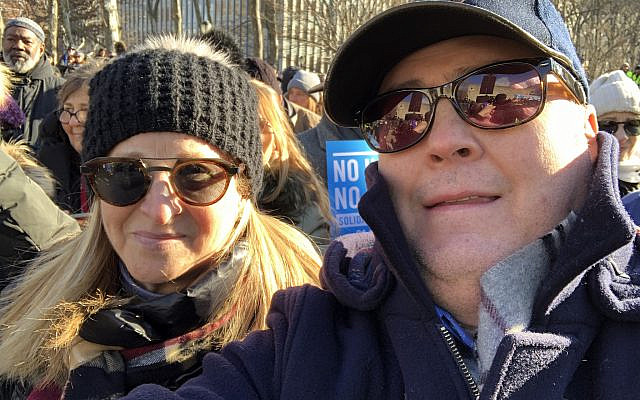 As we enter 2020 and begin a new decade, we’re witnessing an alarming increase in anti-Semitic incidents across North America and indeed, all over the globe. Despite the uncertainties and challenges facing us, however, I can’t help but be inspired by the way our Jewish camp community — along with the larger Jewish community — has responded: with resilience, strength, and pride.

Marching in last Sunday’s “No Hate. No Fear.” Solidarity March in NYC (of which Foundation for Jewish Camp was a proud partner), I felt awed by the sheer number of participants coming together (with not much advance notice) to stand united in optimism and pride. The March transcended political, religious, geographical, and cultural differences, and it was powerful to see so many people from all walks of life walk together, aligned in righteous purpose.

Among the many participants, I was proud — but not surprised — to see young people and adults representing a diverse range of Jewish camps (from Young Judaea to Ramah, from Bnei Akiva to URJ, among others). Jewish camp helps develop an essential sense of self-worth and Jewish connection.  Each summer, Jewish camps work to convey an important message to each and every camper: “Be proud of who you are. Find your voice. You matter. Stand up and be counted.” I was moved to see so many campers and alumni truly embody these values of resilience, engagement, and Jewish pride. Despite our present challenges, the Jewish future shines bright.

In addition to seeing friends from our Jewish camp family at the Solidarity March, I experienced another somewhat unexpected but powerful Jewish camp connection. During the rally right off the Brooklyn Bridge, the Maccabeats sang a beautiful and wistful mash-up of the Beatles’ “Let It Be” and Naomi Shemer’s “Lu Yehi” (translated as “may it be”). The two songs were immensely popular when I was a camper, and the music instantly transported me back to my own Jewish camp experience, evoking both optimism and inspiration. Years later, standing in solidarity, I drew strength from my own formative Jewish camp years to proudly face the present moment.

Hearing two incredible songs of hope by people from different religions, languages, and countries blend so seamlessly together reinforced the universality of the hope for peace. It seemed like a fitting metaphor for the Jewish camp community, and the Jewish People itself: no matter our differences, we achieve harmony when we work together toward a better world.

We’ve just entered a new decade. We can choose to face it with despair and anxiety, or we can choose to respond with optimism and pride. When I look at the unlimited potential of Jewish campers, the choice is easy. They give me hope that, despite our current conflicts and challenges, we will have a better tomorrow.

We need Jewish camp now more than ever.  Thanks for all you do to make it possible.