All over the world, notice is taken of the 500th anniversary of Luther’s posting of his 95 Theses on the door of the church in Wittenberg, thereby launching the reformation. This has been an occasion for considering Luther and his contribution to society. One of the voices that is often heard, and which was repeated recently on Times of Israel, is that Luther should not receive the honor he receives in view of his anti-Semitism and how his thought has fed the ideology and workings of the Third Reich. Alan Dershowitz expresses this sentiment strongly:

It is shocking that Luther’s ignoble name is still honored rather than forever cursed by mainstream Protestant churches. The continued honoring of Luther conveys a dangerous message a message that was not lost on Hitler: namely, that a person’s other accomplishments will earn him a position of respect in history, even if he has called for the destruction of world Jewry. (Alan Dershowitz, Chutzpah, p. 107)

For the record, Luther never made such a call for destruction. But he certainly had many harmful recommendations. 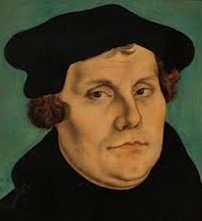 Contrast Dershowitz with Rabbi Marc Tannenbaum, one of the most important 20th century Jewish voices engaged in dialogue with Christianity:

The task for us in this irenic time, this age of pluralism and growing dialogue, is to try to approach the issue of Luther and his teachings with something of the same method by which many Christians and Jews today approach the cumbersomeness of their inherited tradition. Our task always is to separate out the essential teachings of the faith which are healing and redemptive, productive of love and mutual respect, and simply to repudiate that of the past which is no longer relevant or appropriate and was a historical response for another time.

If papal infallibility is not in place, all the more so for Luther. If there’s anything that should characterize the observance of the five hundredth birthday of Luther, I feel it should be the determination to face the bad in past tradition and to replace it by building a culture filled with caring, understanding and above all – knowledge of one another, not as caricatures and stereotypes, but as we are, committed Jews and Christians.(Tanenbaum, From the Past – A Present Challenge, p. 275.)

For 500 years, Jewish views of Luther have oscillated between appreciation and admiration and condemnation and rejection. To no small extent, the pendulum swings according to which one Luther is relating to — the earlier Luther, friendly to the Jews, or the later Luther, whose horrible recommendations (though not for genocide) were taken up by Nazis. From our historical vantage point, the later Luther dominates, in view of the enormously harmful consequences of his recommendations, once these were translated into Nazi racist policies towards Jews. But for hundreds of years, both Protestants and Jews could think of Luther, while ignoring his later recommendations. It is therefore important to recall a lengthy trajectory of Jewish appreciation of Luther. Significantly, this trajectory takes place in a German context, where Luther is a founding cultural figure and a central figure to whom one appeals as part of the Jewish quest for being integrated into German society and culture. Let us hear some of relevant voices. Thus Solomon Ludwig Steinheim (1789-1866):

Let us honour the hero of the sixteenth century, the great, marvelous German, who unfurled the banner of freedom of thought in the highest and purest region of human thought, the thought of and about God, from the spiritual bondage of the Inquisition with his strong arms, and raised it in honour of humanity, once more high on the standpoint of the spirit! Blessed be the memory of Luther, in spite of all that he may have erred in word and deed! Let his memory be holy to us also!

In similar vein, the great Jewish philosopher, Hermann Cohen, applies to Luther fully the Jewish formula “Martin Luther of blessed memory”. Cohen says nothing of the anti-Semitic Luther. To cope with the contradiction in the historical Luther, Cohen claims that the historical Luther is not the most important thing; rather, it is the idea of Reformation.

Examples can be multiplied. Each generation must revisit its view of Luther. The Luther of post-World War II can no longer be presented independently of his anti-Semitic face. This means that both Jews and Christians are challenged to confront Luther in a more real way, somehow accommodating Luther’s shadow side, even as they seek to appreciate his greatness, even his genius. Important rabbinic voices (Reform), have sought to come to terms with Luther, following the Holocaust. One example is Pinchas Lapide’s presentation of Luther, who recognizes the distinction between the earlier and the later Luther. Against such recognition, his application of Jeremiah 2,1: “I remember the chesed (love, grace) of your youth” rings with particular poignancy.

A key strategy for dealing with “Luther’s Jews” was to see them in historical context, by locating the reformer in the history of medieval anti-Semitism. In this history, Luther was, says historian Gordon Rupp, an appalling, disgraceful chapter, but no more than one chapter. Jeremy Cohen of Tel Aviv University, has studied Luther in comparative historical context. Cohen concludes that Luther was not more anti-Semitic than his broader environment or his close historical predecessors. For this reason, dealing with Luther is not simply dealing with Luther, but with an entire aspect of Jewish-Christian relations. If all of Jewish-Christian relations are undergoing a reappraisal, this should, as Tannenbaum has suggested, apply to Luther as well.

There is a significant difference between the early and the late Luther. What was it that led to Luther’s change of heart? More broadly: what were the factors that led to Luther’s negative view of the Jews? Can we understand how he came to hold what he held, and why he adopted his later views? If we can answer “what went wrong,” in ways other than saying that he succumbed to conventional beliefs and opinions, we may learn fundamental dynamics about relations between faith communities, a view of the religious other, and the particularities of what can go wrong in Jewish-Christian relations. If we can identify where things go wrong, contained therein is the promise of reparation and healing. Moreover, without attempting to detract from the burden on the later Luther’s conscience, one may project, based on our knowledge of human relationships and inter-group relations, that when things go wrong, they rarely go wrong in a unidirectional way. Therefore, if we can get past condemning Luther and seek to identify the deeper dynamics that led to his adoption of radical stances in relation to Judaism, we may enter a domain that both Jews and Christians need to visit.

Without seeking to create equivalence or to relativize the horrendous consequences of theologically-based anti-Semitism, we may consider whether any of the relational, attitudinal and social dimensions that help us make sense of Luther and the evolution of his thought might have lessons that apply to Jews. If Luther is revisited from the perspective of contemporary Jewish-Christian relations, this must mean more than Jews condemning Christians and Christians apologizing and repenting for Luther’s anti-Semitism.

In my forthcoming Luther the Antisemite: A contemporary Jewish Perspective ( to appear shortly in Fortress press), I present what I call “the Luther Model”: a series of factors that combined to produce Luther’s attitude to the Jews. It is the model in its entirety, rather than one or two of its components that accounts for “what went wrong.” And it is the model in its entirety that impacts not only Luther but also Jews as they view Christians, as well as other religious communities as they view one another. In other words, we can learn from what went wrong with a great man lessons that would still be relevant for us, and for all religions, today. Following are the components of “The Luther Model.”

What Can We Learn from the “Luther Model”?

If we can get past the cry of the victim at the honor bestowed upon the perpetrator’s mentor, we must look at all these components, and consider them as the DNA of religious intolerance. Luther is simply one particular instance of broader tendencies. Where do such tendencies exist? Everywhere. Who is immune against these elements? No one. In other words, all that did go wrong in the case of Luther could still go wrong with us, Jews, today, especially in the State of Israel. How little we know the other; what wrong ideas and fears we entertain; how pained we are by the memory of yesteryear and how fearful we are for our identity; how convinced we can be of the truth of our faith and the error of others, and how all these are part of our messianic views — these elements come together more frequently than we might wish to admit. Even if only a small minority of faithful manifest the model in all its dangers, all the elements that make religion go wrong are operative to some extent in some aspects of Jewish society today.

We must neither justify nor ignore. Luther was and remains a great teacher. What he has to teach us, even where he went wrong, in the spirit of his day, is a calling for us not to make similar mistakes in the spirit and in light of the needs of today’s Jewish world or Israeli reality. This is a lesson worth learning.

About the Author
Alon Goshen-Gottstein is the founder and director of the Elijah Interfaith Institute. He is acknowledged as one of the world’s leading figures in interreligious dialogue, specializing in bridging the theological and academic dimension with a variety of practical initiatives, especially involving world religious leadership.
Related Topics
Related Posts
Comments
Advertisement