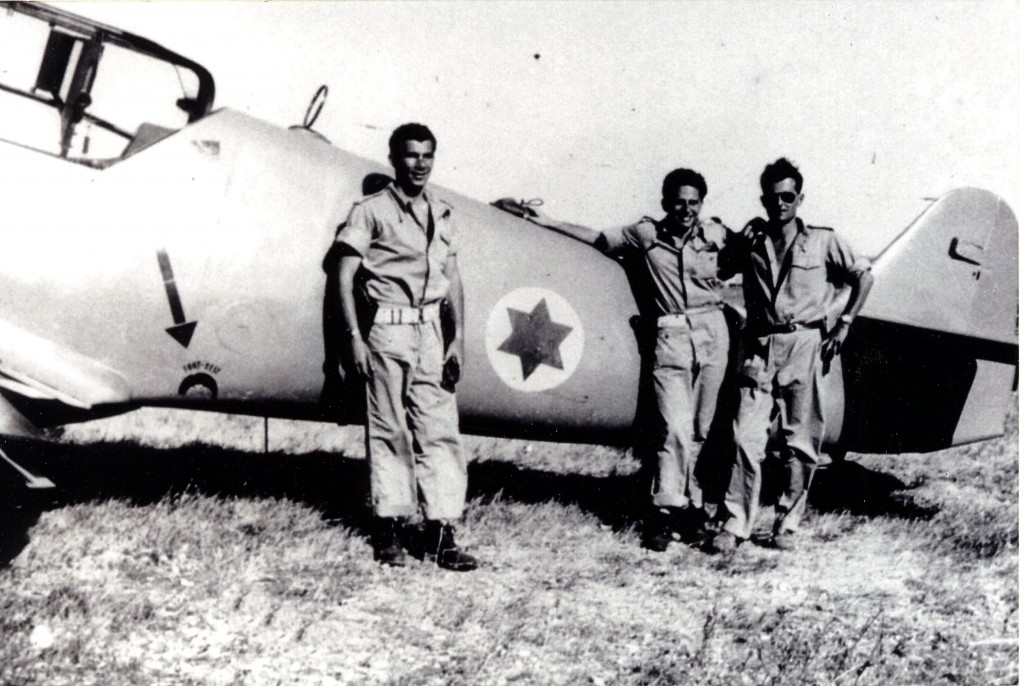 Today, March 11, I attended the memorial service for Gideon (Giddy) Lichtman.  He was the last surviving pilot of the famed 101 Fighter Squadron from Israel’s War of Independence.  The 101 were almost all foreign volunteers from the States.  They saved Israel from annihilation. They did the impossible.

The Egyptian Army was 20 miles from Tel Aviv.  Nothing could stop the Arab invasions.  As if they were Angels swooping from the sky, two Machal pilots and one Israeli pilot, flying Avia S-199’s, (modified Messerschmitts), attacked and stopped the Egyptian Army.  The Egyptians retreated in confusion and fear. Israel was not supposed to have an air force.

Gideon Lichtman was a Machal 101 squadron pilot.  He would gain fame as the first pilot to shoot down an enemy aircraft in air to air combat. He flew nearly 90 critical missions for Israel.

Last Thursday, he died at the age of 94 in his Pembroke Pines, Florida home.

Today, at an aging Jewish cemetery’s memorial chapel, Gideon Lichtman’s body lay draped by an American Flag.  He will be buried with honor a little later in Arlington National Cemetery outside of Washington.  He had retired from the U.S. Air Force as a Major.

His family and friends gathered in common mourning, a Chabad Rabbi officiated.  His Hebrew name was called out, Gideon Ben Boaz Ha’Levi.  One by one, the family stood and spoke about Lichtman the man, the father.  They touched upon his service as a pilot during World War II in the Pacific.  They touched upon his service during the War of Independence. They did not dwell much upon that time, Nancy Spielberg had saved him and his fellow Air Warriors for Israel from obscurity and forgottenness when she did her 2015 documentary, Above and Beyond.

The documentary was not about Lichtman in particular but about the mixed group of American veteran WWII pilots who volunteered to help Israel. They came as Jews to fight, to prevent a second Holocaust. They defied the American Neutrality Acts that were not Neutral but designed to neuter the Jewish State.  They risked their citizenship and their lives for a land where Jewish children could be free.  They did not have to come but they did. They were part of Machal, volunteers from outside.

The family was feted in San Francisco when the Spielberg movie came out.  It was a special time.  Licthman spoke when and where he was invited.  One local synagogue invited him to speak thinking he was a Holocaust survivor.  The Holocaust was an easy topic.  Lichtman said he was a Machal pilot.  The synagogue had no idea who or what Machal was.  They thanked him and went looking for a survivor.

I went to the memorial service as the representative of the American Veterans of Israel Legacy Corporation, American Machal.  In the small reception room, prior to the service, I presented the family a letter of condolence from AVILC president Jeffrey Margolis.

I gave them a picture of the Machal Memorial opposite Ammunition Hill in Jerusalem that was dedicated December 17, 2017.  Attached was a .pdf of the English memorial interpretive marker text. Gideon, I said, will not be forgotten, nor will the nearly 5,000 Machal volunteers who did for Israel what no one else could do.

One of the images in the marker is a picture of Lou Lenart, Giddy, and Modi Alon standing next to one of the “Messerschmitts” that saved Israel.  200,000 people a year visit Ammunition Hill.  200,000 people will see the name, Gideon Lichtman.  He will not be forgotten, certainly, not in this important year, the 70th anniversary of Israel’s birth and victory against certain death.  It was a small consolation to the family who told me, four years ago, few Jews here ever heard of Machal.  Thank you was all that could be said.  They were in deep mourning.

The service was attended by about 60 people, mostly friends, and family.  If a representative from Israel’s Consul General was there, he remained invisible to me.  He did not speak.

Charlie Winters was a non-Jewish supporter of Israel who had broken the U.S. Neutrality laws. Charlie smuggled to Israel three desperately needed B-17 WWII bombers designated as war surplus.  Winters was tried and convicted by the U.S. Government.  Charlie served 18 months in Federal Prison. He was the only person to be imprisoned for helping Israel by the American government.  Ironically Charlie was not even Jewish.  Charlie died in 1984.

At Charlie’s memorial service in Florida, before his cremated remains were transferred to Jerusalem for burial, the Consul General of Israel spoke.  Two very large blue and white flower arrangements from the Government of Israel filled the front of the chapel.

At Giddy’s memorial service, there were no blue and white flower arrangements from Israel.  The Consul General of Israel was not present.  The only flag of Israel present in the chapel was the small lapel pin I had on my jacket of the crossed flags of Israel and the United States.

The American Veterans of Israel Legacy Corporation and the Jewish American Society for Historic Preservation are seeking something that has never been done.  Machal has never been officially recognized by the Government of Israel or the IDF for their service to Israel.  A Unit Citation is being sought, through official channels, for the permanent records of the IDF and the Central Zionist Archives.

About the Author
Jerry is the president and founder of the Jewish American Society for Historic Preservation, www.JASHP.org. He is the son of Survivors of Buchenwald and Bergen Belsen. He is a former Yeshivah student and served with the IDF in the Sinai. He is the author of over 100 articles in publications ranging from the Jerusalem Post to the Prairie Connection to the San Diego Jewish World. Jerry is frequently interviewed on T.V. and on Radio about the American Jewish experience. The Jewish American Society for Historic Preservation has completed projects in 40 US. States and in 6 countries. Over 7,000,000 people annually benefit from one of JASHP's efforts. JASHP has completed 18 projects in and for Israel. November 29, 2022, Netanya: JASHP completed the first-ever historical memorial to the central birthing event for the modern state of Israel - the U.N. Partition Resolution. - -Jewish Agency Facebook Spot. - https://www.facebook.com/yaakov.hagoel/videos/475227947933251/
Comments