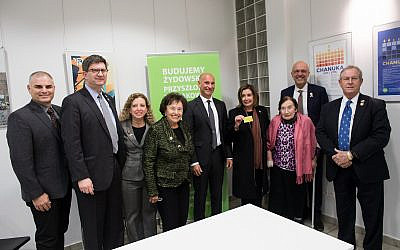 This week I met a remarkable woman; indeed, one of the most powerful women in United States political history. While I may not agree with all of her political positions, I could not help but marvel at what Nancy Pelosi has accomplished in her career thus far: seventeen terms, twice elected as speaker of the House both as minority leader and majority leader, Nancy Pelosi spent the last 45 years in public office and she doesn’t seem to be slowing down. She is smart, passionate, driven and at the same time personable and friendly.

I met ‘Madam Speaker’ at the JCC in Krakow, days before the 75th anniversary of the liberation from Auschwitz to be commemorated all over the world, specifically in Israel and of course in Auschwitz itself. She came with a bipartisan congressional delegation to visit the sites and remember their tragic history but also to learn about the modern-day Jewish community in Krakow. Her office got in touch with the center of Jewish life–the JCC– and a meeting was arranged. 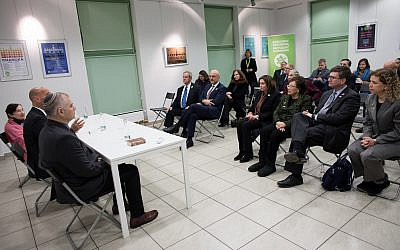 Executive Director Jonathan Ornstein and I spoke about what it’s like to help out with the revival of Jewish life in Krakow, while Zofia Radzikowska, a child survivor, spoke of her past experiences and how she found her way back to Judaism in post-communist Krakow.  At the meeting Mrs. Pelosi expressed interest in the ongoing US/Polish relationship as well as the upsurge of anti-Semitism in Europe and around the world. We responded that though we were apprised of the increased anti-Semitism throughout the world, the Jewish community in Poland has been fortunate to feel quite safe with a good relationship with the Church, the government and most importantly, with non-Jewish Poles, seventy of whom volunteer at the JCC in order to help out with rebuilding Jewish life. 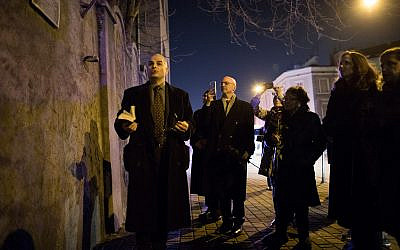 After an emotional meeting in the new kindergarten, Frajda, and a lively discussion, the contingent boarded a bus and paid their respects at the Ghetto wall in Podgórze. I recited the el male rachamim and spoke of how we must always find the right balance of working towards building a Jewish future without ever forgetting to memorialize those murdered in the Holocaust.

Madam Speaker was visibly moved and posted on her twitter page the following release: 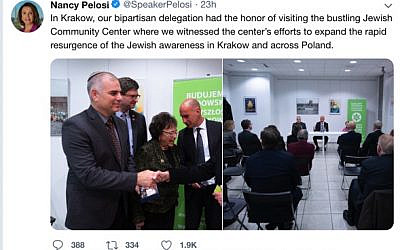 Mrs. Pelosi, a Catholic, Italian-American, apparently inherited her passion for justice about fighting anti-Semitism, and staunchly supporting Israel from her father, one of the most pro-Jewish, heroic Congressional personalities of the 20th century. In an article from 2007 in the Jerusalem Post, Rafael Medoff describes Congressman Thomas D’Alesandro, Jr. of Maryland as a ‘Roosevelt Democrat…who broke ranks with the president on the issues of rescuing Jews from Hitler and creating a Jewish state’. 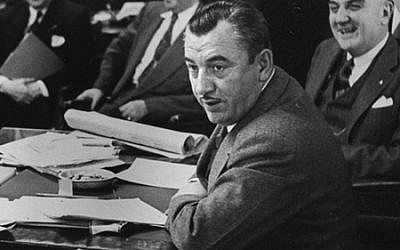 Mayor Thomas D’Alessandro (R fore) during a meeting on how to clean up slums. (Mark Kauffman//Time Life Pictures/Getty Images)

What was remarkable about the congressman was not just his willingness to stand against many others in 1942 and break the silence about the plight of the Jews in Europe. (And break the silence he did– in a congressional record from March 2, 1943, he quoted from a full page ad in the New York Times placed by the Committee for a Jewish Army of which he was a member, saying: “Daily, hourly, the greatest crime of all time is being committed. A defenseless and innocent people is being slaughtered in a wholesale massacre of millions. What is more tragic is they are dying for no reason or purpose…Already 2,000,000 of the Jews in German-occupied Europe have been murdered. The evidence is in the files of our own State Department.”)

D’Alesandro Jr. went one step further; he made a literal call to arms! Already in 1942, he spoke in front of the Speaker of the House on behalf of the committee to form a Jewish Army which would support 200,000 Jews who were willing to go and fight for their brethren in Europe. Can you imagine what would have happened had the House of Representatives accepted his proposal and armed and sent hundreds of thousands of Jews to go fight and save their relatives from the gas chambers?

He pleaded with Congress to “do all we can to see that this basic justice not be denied to the descendants of Jeptha and Deborah, the Maccabees and Bar Kochba”.  What passion! What foresight! While his plans did not come to fruition and the horrors continued, Medoff reports that ultimately, Roosevelt did get the message and in early 1944 he established the War Refugee Board which played a key role in saving more than 200,000 Jews from the Holocaust! 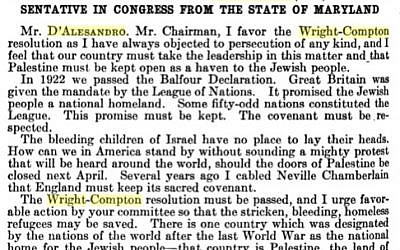 After the Holocaust, D’Alesandro turned his efforts towards Palestine and to supporting the Jews’ right to build their homeland. In a statement he made before the Committee on Foreign Affairs in 1944 he staunchly supported the Wright-Compton resolution which sought to remind the British government to stand by their mandate presented in the Balfour Declaration and give the Jews a homeland. He concluded with a heartfelt message: “there is one country which was designated by the nations of the world after the last World War as the national home for the Jewish people-that country is Palestine-the land of their forefathers.”

D’Alesandro Jr. had guts; he spoke out even when his own party wouldn’t. He would break ranks with Roosevelt about the Holocaust and break ranks with Truman about ‘Palestine’ as the Jewish homeland before Truman adopted this position. He was truly passionate about the Jewish people, their welfare and their ultimate right to have a homeland.

Perhaps this kind of clarity was transmitted to Nancy as she was growing up; perhaps she understood at a young age the special relationship Americans would have the Jewish people and the responsibility not just to speak out for Israel but to take steps, sometimes unpopular ones, to support Jews, fight anti-Semitism and champion the Zionist cause.

I am sure that her father, Congressman Thomas D’Alesandro Jr., will be smiling down from heaven as his daughter continues to walk in his footsteps, speaking out for truth and justice, and taking active steps to ensure the continued support for the Jewish people and the State of Israel.