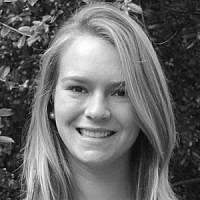 The Blogs
Emma Colbran
Apply for a Blog
Advertisement
Please note that the posts on The Blogs are contributed by third parties. The opinions, facts and any media content in them are presented solely by the authors, and neither The Times of Israel nor its partners assume any responsibility for them. Please contact us in case of abuse. In case of abuse,
Report this post.

Half a year ago, I embarked on the most incredible adventure of my entire life, to date. Six months ago I drove to the John F. Kennedy Airport in New York City, got on a plane with two of my best friends, thirty-seven other students my age, a young Rabbi, and a student leader. As I said goodbye to my mom and boarded the plane I could feel the excitement streaming through my body.

This op-ed is about my ten-day gift, my Birthright trip to Israel, where I met and experienced some of the most amazing things I ever have. This trip changed my perspective of the world, my understanding of who I am, and where I stand as a person and as a Jew. I grew up learning about Israel in Hebrew school and going to services for high holidays, however it was not until I landed in Israel that I understood the importance of the trip I was on.

The sights were incredible. I got to spend a night in the desert living in a tent and was able to see the most clear, illuminating stars.. I drove through the desert and watched the Dead Sea through the bus window.   Though I had learned about the Dead Sea in class I never knew was going to be so beautiful it would take my breath away. Hiking, shopping in busy city centers, learning about Israel’s independence and experiencing the holiness of Masada and the Western Wall filled my days.

As we continued through this trip our leaders wove all of us into one big family. Not only were there 40 American students on this trip, we were lucky enough to have seven Israeli soldiers, all our age, on the trip with us for five days. I forged bonds with these Israeli teens that I feel more than privileged to have formed. They enhanced the meaning of the trip tenfold for every single one of the American students on the trip.

I left Israel knowing I had another family, one that had grown and experienced the magic of Israel with me.

When I returned to America after my trip I felt a void inside me. Not only did I want to go right back to Tel Aviv, I wanted to tell everyone about how amazing Israel is and how imperative it is that they go on Birthright right away.

Unfortunately, about three weeks after I returned home, Hamas kidnapped three Israeli teenagers. I was deeply concerned about the state of Israel and what may happen following this kidnapping. As the summer unfolded into the war Protective Edge, I kept in frequent contact with many of the soldiers who had been on my trip. They kept me updated and told me to stay positive and not to worry about them, an impossible request.

This past summer I avidly kept up with the news, and was frequently frustrated when things I was reading about did not match up to what my friends in the IDF were telling me. I wanted to do something. I felt like a useless American sitting in a vacation home. I wanted to expose Hamas for who and what they truly are: a terrorist organization that promotes genocide of all Jews, and has no qualms using its own people as human shields, endangering the lives of their people and the Israeli people. I was lucky enough to be put in contact with the organization CAMERA (Committee for Accuracy in Middle East Reporting in America) where I applied for a Fellowship and was accepted. This title meant that I had to do exactly what I had wanted to do all summer. Be active, spread the truth and fight for the state of Israel.

A week ago I helped host a speaker, Dr. Anat Berko, on Tulane University’s campus. She is a world-renowned psychologist and counter-terrorism expert who specialized in the manipulation and utilization of women and children as human bombs. Before her lecture students from the on-campus group Students for Justice in Palestine protested shouting hateful words about Israel and its people. This was my first encounter with anti-Israel protestors and they really made me understand why my activism is so important. Students are easily influenced by the media and their friends, and false information spreads and catches on like wild fire. I hope this year to make a difference on my campus and help educate as many students as I possibly can.

Had it not been for my trip to Israel I do not think I would be doing any of this right now, writing this article or bringing my first educational speaker to my campus.

Israel is magic, it touches, spreads, and locks on to you and the effect is ever lasting.

About the Author
Emma Colbran, originally from Scarsdale New York, is a sophomore at Tulane University and a 2014-2015 CAMERA Fellow.
Comments