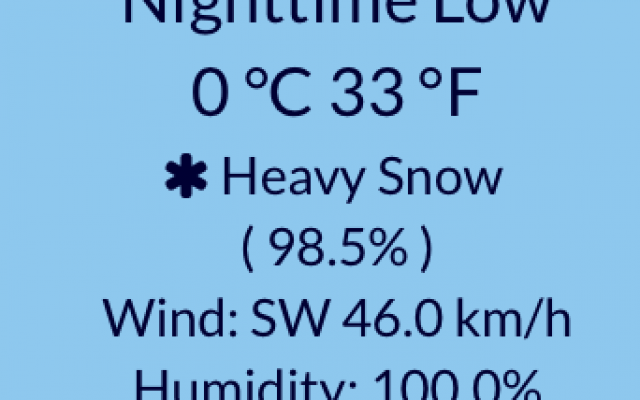 A Snowy Late Wednesday Afternoon and Night for the Jerusalem Area.

Major Winter Storm to Affect the Country on Wednesday and Thursday.

Our high resolution forecast model shows that rain should transition to snow in the higher elevations of the central and northern mountains, including Jerusalem, Wednesday late afternoon.  Our forecast maps show that snow should accumulate through the night into Thursday morning.  Snow could be heavy at times and strong winds and snow will likely greatly reduce visibility. Many roads will probably be closed.

At the moment, we’re forecasting several centimeters of snow generally in the Jerusalem area and between 10 and 20 cm in higher areas within and the mountains just to the north and to the south (Gush Etzion).

The cold weather should persist into Shabbat.

Winds will be very strong, probably greater than 60 km/h during the afternoon and nighttime hours.  These winds could cause damage, so be sure to secure loose objects.

Overall, precipitation amounts Wednesday into Thursday should range from 50 to 75 mm generally from the center of the country to the north, where amounts will approach 100 mm again. Hence, urban flooding is possible, and river and stream flooding is likely from northern Israel to areas south of Mitzpe Ramon, and in the Jordan Valley.

Earlier, there were still some important differences in the positioning of the upper level trough between forecast centers. The NCEP GEFS brings the coldest air into our area, while the ECMWF’s forecast model kept the trough a bit further to the north (as it phases with a Black Sea trough).  The latest forecast from the European Center has shifted towards the colder forecasts of the GEFS. How much snow will fall will depend on where we end up in the probability distribution of atmospheric temperatures that make up these global ensemble forecasts, as there is still some variability within them. Still, overall,  they indicate a significant snow event.  Our  high resolution WRF forecast is based on the NCEP GFS, which remains steadfast in bringing a major winter (snowy) storm into our area on Wednesday.