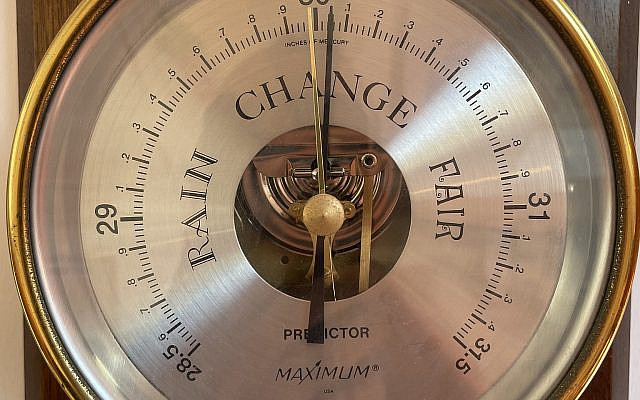 Another Siberian blast of cold weather is on the way for next week, and Wednesday and/or Thursday have a relatively high probability of accumulating snow.

But, before getting to the details, I’d like to better explain how weather forecasts are made, and what we mean by probability. By probability, I mean the chance of something happening. If a forecast is accurate the probability of an event will equal the number of times that event happens within some number of possible events times. Probability forecasts are called “ensemble” forecasts.

Any decision about the future is made on the information on hand, and probability can help us maximize our chances for success over the long term. We want our decisions to have both economic and societal value.  In fact, I studied the economic value of lightning forecasts.

But what of that information? What is it made of? A few days ago we found out that our dog was very sick. She was very anemic. A treatment plan was laid out consisting of antibiotics and steroids, but she died the next morning. What we didn’t know was that she had liver failure, which was revealed by blood tests later the next day, which indicated a possible poisoning. Had we known that, she would have definitely needed to go to the hospital to save her life. Sometimes, decisions made on a hunch lack the information needed to correctly assess the chance for success or in this case recovery. Such a hunch might be an assessment of probability (she will likely be okay, for instance).

Sometimes, information needs to be put in context. People say that I sound terrible (and must be sick). However, I sound much better than I did — after I lost my voice from coughing. The coughing happened while I was sick with the Omicron variant of the Coronavirus.

One reason accuracy has improved is an emphasis on using probability forecasts to provide valuable information. In a simple sense, when the probability of an event exceeds the cost versus lost ratio, then actions should be taken to protect against the impending weather event. When it’s very high, what we tell the public is more likely to happen. Measuring cost, though, can be difficult, especially when lives are at stake, even if an economic value is assessed. It’s much harder to measure lost feelings, and we don’t always know when our probability information is useful.

As a forecaster, though, we also need to manage expectations. After all, people make decisions about where they will go or not, and some people’s short term happiness is even based on forecasts of large snow events. Since many weather forecasters are excited when a big storm is on the horizon, it can be difficult for the forecaster himself/herself to remain objective.

What do I mean by objective? To understand this, one needs to know that ideally all forecasts would be based on probability. One would evaluate the probabilities and base one’s decision on the cost to loss ratio. No feelings involved — just probabilities of events and their potential impact on stake holders, or the public. Take action or no.

Ensemble forecasts are often made by varying the measured weather conditions. For instance, in my town of Efrat I might measure -1 Celsius at my home, while someone else will measure -2. We might also measure different wind directions, etc.  Through careful consideration, the ensembles created through these methods can provide a sense of surety. As a side note, ensemble forecasts can consist of single forecasts grouped together, where each of the forecasts uses different representations of model physical systems — but this is not the kind of ensemble that gives uncertainty related to the difficulty of measuring the state of the atmosphere. It is, instead, a measure of the uncertainty created by our lack of ability to model land and atmospheric models (this is especially important when considering sub-seasonal or seasonal forecasts).

Last Tuesday morning, the global ensemble forecasts showed both high variability (uncertainty) and even the mean of the forecasts varied depending on which model one looked at. It was “difficult” for the forecaster to predict just how far south the coldest air would reach (to Jerusalem or not). This made for a very challenging situation, trying to decide just how cold the surface temperatures would get, and how much precipitation would fall. This meant that rather than present information about surety, it was necessary to make subjective assessments based on experience and evaluation of the circulation patterns predicted in each forecast. This creates even more “room for error”  that is usually present in forecasts.

To reduce the uncertainty, we make localized (for Israel) higher resolution forecasts and higher forecast ensembles than the global forecasts. These forecasts have the advantage of better resolving elevation height influences on precipitation types, as well as can simulate scales of weather that more realistically represent thunderstorms and layered (steadily precipitating) clouds over mountains.

Tuesday morning it looked very promising for snow late Wednesday afternoon and evening, but we were beyond the time (too early for) of our high resolution forecasts (which are relatively expensive to run). Before making an optimistic snow forecast for the Jerusalem area, I should have waited until I had additional information from my own forecasts. I needed the global forecast information in context of what it meant for surface temperatures in Jerusalem and surrounding areas. When I had such forecast information, I realized that my initial assessment was wrong, and that lesser amounts would likely fall.

In the end, we ended up on the warmer side of the uncertainty range, and had about half the amount of precipitation possible. The result was a period of accumulating snow in many areas, but the totals were a dusting to several centimeters. Of course, extreme cold was also forecast, and this did arrive or verify (in the forecast).

Now, we’re looking ahead to next week. We can see two cold waves, both early in the week and late in the week. Based on the global ensemble forecasts, a strong ridge of warmer temperatures should build into far western Europe, which will encourage even more Siberian air to move southward into our area. The late week is showing the highest probability for a moderately sized snow accumulation. This is because temperatures closer to the surface and in the upper atmosphere are forecast to be unusually cold. So convective precipitation should first lead to evaporative cooling at the surface, and the continuing flow of cold air means that snow should end up falling as “fluffy” snow. Yet, the total precipitation amounts are in the 10s of millimeters, unlike our December 2013 storm where total precipitation amounts were greater than 100 millimeters. This is why we expect more moderate amounts of snow, even if some would describe them as heavy snow.

Temperatures will remain unusually cold until the end of the month. February appears to show some moderation in our cold, although some of the forecasts indicate the possibility of another storm. So, enjoy our winter “of the past” while it lasts in the present.

Be well and Shabbat Shalom