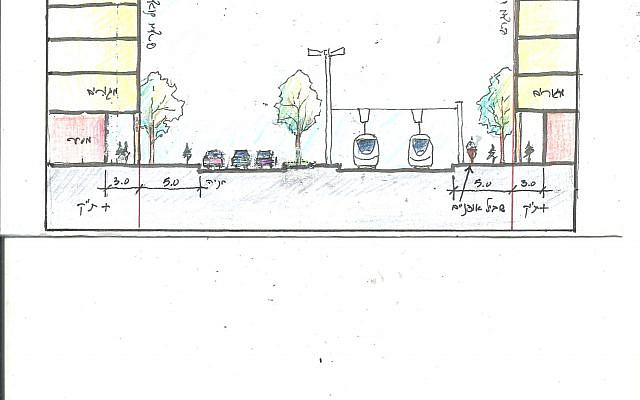 Jerusalem’s Herzl Boulevard is an arterial road and public transport corridor of national importance. Visiting heads of state pass through it on their way to Yad Vashem. Extending from the city’s western entrance (The Bridge of Strings) through Kiryat Moshe and Beit Hakerem, to Mount Herzl with its national military cemetery and Yad Vashem, it is connected to Ruppin and Rabin roads leading to the government center, The Israel Museum, the Knesset and the Supreme Court. Over time it has become the main artery serving west Jerusalem.

For the last several years Jerusalem Municipality has been backing building projects on Herzl Boulevard on a piecemeal basis, towers of various heights unrelated to the width of the boulevard and lacking any semblance of unity. All of these projects, one of them presently under construction, are on the western (Yefe Nof) side of the boulevard adjacent to the existing light-rail line where accessing private parking is most difficult. Crossing the rail line is of course dangerous. One of the streets behind is just 9.0 meters wide. Another poorly designed project that could be built anywhere has recently been approved facing Denmark Square, Beit Hakerem’s traditional center. To date no building projects have been proposed for the eastern (Beit Hakerem) historic side of the boulevard.

Lacking a comprehensive, long-range and legally binding plan, the result is sure to be a lopsided and unbalanced design, not a boulevard at all. Stuffing as many apartments as possible into every new building project as the municipality has been doing can hardly be called a planning policy.

Prepared on a volunteer basis by three architects, two of them holding Masters Degrees in Architecture and Urban Design, a comprehensive, long-range plan for the boulevard integrated land use, public and private open space, building, transportation and parking.

While our work focused mainly on Beit Hakerem, the plan’s key planning principles are applicable to the entire route:

Representatives of the Beit Hakerem neighborhood are to meet with Jerusalem City Engineer Yoel Even and his staff sometime soon. Eight and a half months after our plan was presented to the neighborhood’s building committee, a date for this meeting still hasn’t been set. Expected but hard to believe is that the municipality will enable true dialogue and seriously examine this comprehensive design proposal, granting Herzl Boulevard the opportunity to live up to its name.

About the Author
Gerard Heumann is an architect and town planner in Jerusalem.
Related Topics
Related Posts