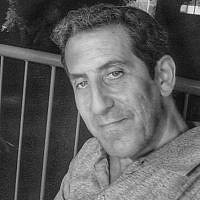 The Blogs
SJ Arieh Selig
Seeking a better way.
Apply for a Blog
Advertisement
Please note that the posts on The Blogs are contributed by third parties. The opinions, facts and any media content in them are presented solely by the authors, and neither The Times of Israel nor its partners assume any responsibility for them. Please contact us in case of abuse. In case of abuse,
Report this post.

There are so many interesting and fascinating stories about the Queen that I’ve heard in the last few days.
Has been quite a roller-coaster.

All the interviews I heard of people who met her, from young children to the very elderly spoke very lovingly of her, and how she was able to put them at their ease despite the fact they were meeting Royalty and probably the most recognisable person in the world.

Her visit to Ireland in 2011 is what interested me the most, as did Charles visit to Northern Ireland today.

The British Prime Minister sat next to her Irish counterpart.

The Speaker of the Northern Ireland Assembly is a member of Sinn Fein.
Often described as the political wing of the IRA.

Here he was, dressed in black tie, speaking directly to King Charles 3rd offering his deepest condolences to him on the death of his Mother.
This would have been unthinkable even 10 years ago never mind 20.
30 years ago he’d be more tempted to shoot him!!

That’s not an exaggeration.

In 2011 the Queen made a State visit to Ireland.
The current President of Ireland at the time was Mary McAleese.
A Catholic who grew up in Northern Ireland.

At the State Dinner the Queen began her speech in Gaelic.
The look on the Irish President’s face was one of astonishment yet of HUGE appreciation.
The Queen speaking in Gaelic in Ireland.
Groundbreaking.

She visited Croke Park the spiritual home of Irish Gaelic Football.
In 1920 British troops shot dead 14 Irish people and somewhere between 60 and 100 were injured.

She stood between the Irish PM and the Irish President and with a very sad and solemn face looked at them both and said.
“I know, I know.”

She herself has also suffered family loss at the hands of the IRA.
Prince Philip’s Uncle Lord Mountbatten was blown up on his boat in Warrenpoint and on the same day the IRA shot dead 18 British soldiers.

Yet, on that visit she met and shook hands with Martin McGuinness, a former leader of the IRA.

Prince Charles has also met Gerry Adams, often described as the most well known Irish Republican in the world, and also shook hands.

The Queen was expert in healing divisions through on the face of it, very simple but extremely symbolic gestures.
The peace process in Northern Ireland has her strong presence on it.
No one said forget the atrocities, but the Queen was a visionary and without such courage and vision peace would not be possible.

Rav Ian Paisley said he would NEVER share power with a Republican.

Sinn Fein offered King Charles their deepest condolences and their commitment to progressing the peace process.

The Queen spoke Gaelic in Ireland, expressed great remorse for what happened in Ireland 6 years before she was born and for earlier chapters of deep regret.

She shook the hand of a former terrorist having suffered personal family loss herself.

People keep telling me, yes but the war between Israel and The Palestinians is not the same.
True, there are definite differences, BUT surely after so much struggle and blood spilt on Irish and Northern Irish soil, over the centuries, both Catholic and Protestant blood….

Don’t tell me there is nothing we can learn about making peace.

About the Author
Northern Ireland born & bred. Made Aliya in 1990 just before the Gulf War. WUJS in Arad (World Union of Jewish Students) graduate. Worked and lived in Baka Jerusalem since 1992 I'm a Centrist by default, the distance between Left and Right is too great. Whether I write about the state of the world, politics, or a couple having a cuppa, my real aim is to close the gaps between us.