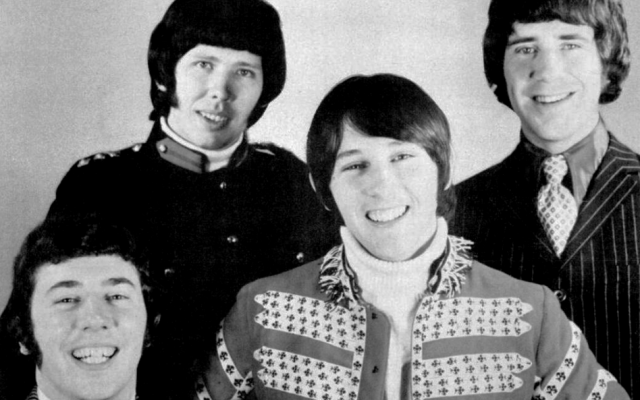 In September 1963, Brian Poole and the Tremeloes had come up from London to perform in Liverpool. Midway through the set they got a notification that a telegram was waiting for them at the post office. Poole and the band rushed down to read the message, which said, “Well done lads, you’ve just sold over a million and something records.” Their cover of Berry Gordy’s “Do You Love Me” had reached number 1 in the UK charts.

As they went to catch the train from Lime Street station, they looked around and saw the newspaper headline, “Beatles knocked off top by London band.” Needless to say, the bandmembers bought a dozen copies each.

Many people of my generation know the original version of “Do You Love Me” by the Contours from the movie “Dirty Dancing.” It had reached number 3 in the US charts in 1962 and became a hit a second time, reaching number 11 on the Billboard Hot 100 in August 1988, following the release of the “Dirty Dancing soundtrack.”

Back in England in 1963 Brian Poole and the Tremeloes were celebrating and reflecting on the path that had got them to the top spot in the charts. Just a couple of months earlier they had reached number 4 with “Twist and Shout.” But their success had begun on New Year’s Day in 1962 when they auditioned for the Decca record label, along with another up-and-coming band. Mike Smith, an A&R scout for Decca, had hoped to sign both bands, but said he couldn’t make the final decision until his boss, Dick Rowe, returned from a trip to the US.

When Rowe returned to London, so the story goes, Smith brought him the tapes of both bands, and assured him he thought they would both become huge hits. Rowe asked him how long he had been with the company.

‘Two years,’ replied Smith.
‘And how many hits have you had in that time?’ asked Rowe.
‘None,’ Smith answered.
‘And now you’ve discovered two hit band on the same day?’ pressed Rowe.

In the end, Decca decided to only sign one of the bands, The Tremeloes. Poole and his bandmates had made the big time. But not quite as big as the band rejected by the record label — The Beatles.

In his 1964 autobiography, The Beatles’ manager Brian Epstein quoted Rowe as saying, “Guitar groups are on their way out, Mr. Epstein.”

The man in this picture is Dick Rowe. In the early 60's, Dick worked for Decca Records in London. Dick is the man who…

Posted by The College of Rock and Roll Knowledge on Friday, May 5, 2017

Rowe would become known to history as the man who did not sign The Beatles. His name became synonymous with missed opportunities.

However, that is extremely unfair to Rowe. Apart from the fact that he denied having ever said the quote attributed to him, he had sound reason for signing the Tremeloes. The record label was based in London and so were Poole and his band. In the early 1960s location really made a huge difference. Liverpool was a long way away from the Decca offices. It would have been much more difficult for the label to keep an eye on The Beatles and to look after them properly.

Furthermore, in their audition, The Beatles had also played cover versions of songs. John Lennon wanted to play more raw rock n’ roll, but Epstein convinced the future Fab Four (who at that time still had Pete Best on drums) to stick to standards like “Till There Was You.” They played only three original songs, “Like Dreamers Do,” “Hello Little Girl” and “Love of the Loved.” The rest were all cover songs.

You can listen to the demo yourself and see whether you would have signed The Beatles:

A few months later, Epstein met George Martin and in June The Beatles were signed by Parlophone. Within four months, Ringo Starr replaced Best and The Beatles had their first number 1 hit with “Love Me Do.” The rest, as they say, is history. The Beatles and Beatlemania became a global phenomenon that lasts to the present day. Whereas Poole left the band and returned to work in his brother’s butcher shop in East London.

Hindsight is a wonderful thing. Today we can’t imagine anyone being foolish enough to turn down The Beatles. But at the time Rowe made his decision, there was very little to distinguish between The Beatles and the Tremeloes.

And before we pass judgment on Rowe’s lack of judgment, let’s look at some of the other bands he did sign to Decca: Them (with Van Morrison), the Moody Blues, the Zombies, John Mayall’s Bluesbreakers, Tom Jones, the Small Faces, Billy Fury, The Animals, Cat Stevens, and Procol Harum to name just a few. However, he did have at least one more big miss – when The Animal’s Chas Chandler brought a new band he was managing to the Decca A&R man, Rowe said no. That band was The Jimi Hendrix Experience.

Perhaps Rowe’s best signing came at the recommendation of George Harrison (the Beatle’s guitarist). Harrison mentioned to Rowe how impressed his band had been with a London-based band – The Rolling Stones. The Decca man rushed to sign them, offering three times the royalties a new band would normally earn, full artistic control and ownership of the recording master tapes.

Decision-making is fraught with danger. To pick one option means rejecting any number of potential better possibilities. Yet not making a decision can have even worse consequences. Sure, Rowe didn’t sign The Beatles. But he did sign the Tremeloes, who had several hits for Decca. And Rowe was not paralyzed by his failure to sign The Beatles, but went on to make decisions which led to adding some of the greatest bands to the Decca stable.

Singling out one person or one band from the crowd puts almost impossible pressure on them to perform well, and they will be judged by the rest of the crowd on their performance in comparison to all those who were not chosen.

Parshat Bamidbar is almost entirely a list of the number of men in each tribe. The second verse is an instruction to conduct a census (Numbers 1:2):

Count the head of the congregation of the Children of Israel according to their families and their father’s house, a headcount by the number of names of each male.

Counting people is dangerous. It singles out each individual, shining a spotlight on the person who can no longer hide within the safety of the crowd.

When the prophet Elisha asked the Shunamite woman how he could repay her for her hospitality, she asked not to be singled out (II Kings 4:13):

‘What can be done for you, can we speak to the king or an army chief on your behalf?’
But she said, ‘I dwell among my people.’

The Shunamite woman did not want the spotlight. She wanted to remain within the crowd. And she was praised for this.

Conversely, King David realized he had sinned, and was then punished, when he singled out individuals and conducted a census of the people (II Samuel 24:1-17):

The king said to Yoav, captain of the army who was with him, ‘Go, please, through all the tribes of Israel, from Dan to Beersheba, and count the people, so that I should know the number of the people.’

But Yoav said to the king… ‘Why does my master the king want such a thing?’

And David said to God, ‘I have sinned greatly in what I have done.’…

And God sent pestilence on Israel, from the morning until the appointed time, and 7,000 men died, from Dan to Beersheba.

The Talmud (Ta’anit 8b) says that blessing is only found in something hidden from the eye, or something the eye does not rule over. A person should ask God to bless their grain after it has been harvested but before it has been counted or weighed. Once it has been measured, a request for blessing would be in vain.

David was punished for counting the people. The Shunamite woman refused to be counted or singled out. Blessing is only found on crops which are not measured or counted. Yet in Parshat Bamidbar it is God who tells Moshe to count the people.

There is a huge risk in taking the mass of hundreds of thousands of people and putting strict limits on them by counting them. Before they were counted, the nation had unlimited potential. After the counting, it became finite. Singling out each individual separates them from the crowd. But also invites comparison and competition among the individuals.

Ramban (on Numbers 1:45) writes that he does not understand why God would command Moshe to count the people. He gives several possible answers.

One of the answers is that in the desert the people were counted by Moshe and Aharon. Normally, being singled out by the leader is risky. But in this case, each person received special merit when they were counted by those two spiritual giants. Moshe and Aharon did not look at the individual and see his potential flaws or failings when compared to the crowd, but rather discovered how best to pray for or help each person when they came to know them. And similarly, when God wants to count the people it is to show His kindness and love, not to separate the individual from the crowd.

Whenever we make a choice, we collapse the infinite potential into a single timeline. When Rowe chose The Tremeloes he rejected The Beatles. And exposed the London band to impossible comparison with the Liverpool quartet.

But he also made a choice. He allowed the band to have their moment of greatness. Had he not made the choice, he would have failed at his task.

We all make choices daily. Some decisions are more momentous than others. Each time we make a decision we reject other possibilities. But without making a choice we lose even more.

The only solution is to accept the decision, ignore the risk, and look for the blessing it will bring. Counting the individuals within the nation was dangerous. But without it, the people would have missed out on reaching their full potential and realizing their unique blessing.

My current series on WebYeshiva is live every Tuesday and about personalities from the Book of Ruth based on the Talmud and Midrashim. You can listen to the live or recorded Torah classes on WebYeshiva. I’ve also started sharing more of my Torah thoughts on Facebook. Follow my page, Rabbi Sedley.