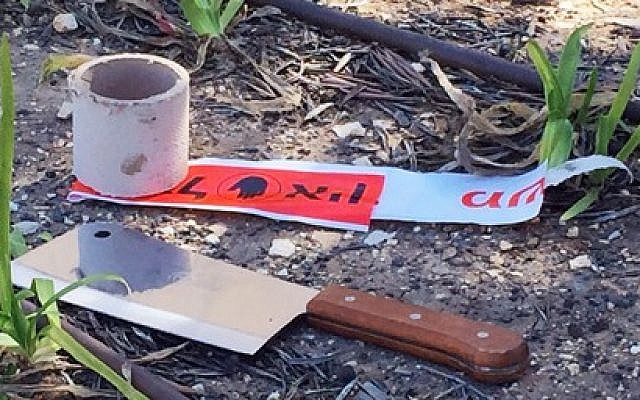 A knife wielded by a Palestinian assailant at the scene of a car-ramming attack in northern Jerusalem on Friday, March 6, 2015 (Photo credit: Channel 2 News)

“The problem is that it made the conflict much more manageable. And so like now for Palestinians its terrible and getting worse all the time, but for Israelis it’s getting easier and easier all the time to keep this conflict going.”

“It used to be there were much more similar levels of casualties on both sides, but now it’s more like one Israeli casualty for every 50 Palestinians, which means that the two sides now have pretty different levels of interest in changing the status quo.”

The above quotes were taken from the New York Times “The Daily” podcast on February 14. (The specific quotations start at the 17:00 mark.) The interview was with Amanda Taub and Max Fisher, who write The Times’ “Interpreter” column. The Interpreter calls itself a column “designed to provide context behind major world events.”

What sort of “context” are they providing?

If they had checked in their own paper, they would have seen:

A search of the Times website will show numerous articles reporting Israelis being killed or wounded in Palestinian terrorist attacks.

An Associated Press article published by the Times a few weeks ago reported that “Since 2015, Palestinian attackers have carried out numerous stabbings, shootings and assaults using cars, killing 41 Israelis and two visiting Americans…”

Venturing outside the Times’ coverage, the “Interpreter” could have easily seen (from the Israeli Ministry of Foreign Affairs) that in the last two years (up until January 2017), 47 Israelis have been killed and 659 have been injured.

A fifty to one ratio would indicate that in the last two years, 2,350 Palestinians have been killed and 33,000 injured.

Of course that is an absurd statistic. According to the AP article published on the Times website: “During the same time, Israeli forces have killed 235 Palestinians.”

So the Interpreter makes up a statistic that is contradicted by the very coverage they are tasked with clarifying.

What about the conclusion that because of the lopsided statistic, Israelis are happy with the status-quo? Does that support the following from The Times’ analysis on December 28:

Israelis live under the constant threat of terrorism, enduring sometimes daily assaults by attackers wielding knives or driving cars into crowds. The Palestinian authorities venerate such “martyrs” and compensate their families financially.

Again, the Times has published many times that the majority of Palestinians killed were attacking Israelis. But a listener of the podcast would never know that. Instead, Fisher and Taub would have their audience believe that only the Palestinians are the ones suffering and so they are the ones interested in peace.

If they seek peace so much, why all the terrorism and support for attacks by the Palestinian Authority?

The description of ‘The Daily” podcast on I-Tunes says it provides “Only what you want to know, none of what you don’t.”

So they are saying that people really don’t want to know how many Israelis have been killed in terrorist attacks. They assume that people want to be told that Israelis are happy with the status-quo while the Palestinians are desperate for peace.

Rather than clarifying and providing context to world events, the Interpreter broadcasts incorrect data that is contradicted by the Time’s own coverage.

I have written to Taub. Let’s see if she will correct her factual error on the podcast.

For more on media coverage of Israel, read The CAMCI Report.