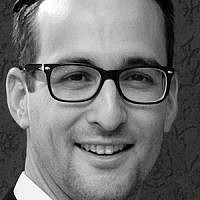 The Blogs
Dave Lawrence
Apply for a Blog
Please note that the posts on The Blogs are contributed by third parties. The opinions, facts and any media content in them are presented solely by the authors, and neither The Times of Israel nor its partners assume any responsibility for them. Please contact us in case of abuse. In case of abuse,
Report this post.

Johnny Clegg, Mango Groove and Bombshelter Beast. Updates and banter from family and friends. Some depressing news about the state of the economy. “The Rand is worth so little these days people are marrying for love.”

These are the tidbits which keep my consciousness tethered to the country of my origins on a regular basis. Every day I spend in Israel I become more connected to this place I now call home and less connected to South Africa.

But this week was different.

July 18 would have been Nelson Mandela’s 99th birthday. In South Africa, it is called Mandela Day. Everyone is encouraged to contribute 67 minutes of outreach and service to humanity. 67 is the number of years Mandela devoted to public service.

I was born in 1985. Those first few years of my life, in terms of world history, were some of the most significant of the 20th century. The bringing down of the Berlin Wall and the end of the Cold War. In a local sense, the release of Mandela and the unbanning of the ANC. These events set in motion a process, the significance thereof I would appreciate only years later.

There is one particular moment which requires reflection.

It is April 1993. The CODESA negotiations are taking place to decide how democracy will play out in the new South Africa. The main role players are the white South African government and the African National Congress, of which Mandela is the leader. The negotiations are already at an advanced stage. A date for the elections is yet be decided. But tensions are high with tribal violence rampant throughout the country.

On April 10, white supremacist Janusz Waluś walks into the driveway of charismatic black leader Chris Hani and assassinates him at point-blank range. This is it. The negotiations derailed. The completely irrational notion of “swart gevaar” (“black danger”) on which much of Apartheid was built is now completely rational. Whites expect the backlash of revenge and violence to be severe. Blood on the streets. Full scale civil war. I recall not to going to school the next day because of the fear of impending violence.

Enter Nelson Rohlihlahla Mandela. He broadcasts this message that evening:

“Tonight I am reaching out to every single South African, black and white, from the very depths of my being. A white man, full of prejudice and hate, came to our country and committed a deed so foul that our whole nation now teeters on the brink of disaster. A white woman, of Afrikaner origin, risked her life so that we may know, and bring to justice, this assassin. The cold-blooded murder of Chris Hani has sent shock waves throughout the country and the world. … Now is the time for all South Africans to stand together against those who, from any quarter, wish to destroy what Chris Hani gave his life for – the freedom of all of us.”

Mandela’s call for unity typifies an expression of leadership and political genius not often seen. Relative calm is restored, the negotiations continue and a date for the future elections is secured. On 27 April 1994 South Africa holds its first free and democratic election in its history.

At Mandela’s memorial in December 2013 Barack Obama remarked that Mandela “no longer belongs us; he belongs to the ages.” The generation in which I have grown up can still proudly claim the man as ours. I genuinely well up with a deep sense of pride and appreciation towards a giant of humanity, a master of the personal.

RIP Tata Madiba and thank you.

About the Author
Dave Lawrence made Aliya from South Africa to Jerusalem in 2013. He has been involved in Jewish education, startups and consulting. He is a proud expat and prouder Jew.
Related Topics
Related Posts
Comments