In Netanyahu’s speech of defiance following the Israeli Attorney General’s decision to indict him in all three cases for bribery, fraud and breach of trust, he described Avichai Mandelblitt as “being only human”. He explained that Mandelblitt’s decision to indict him was not based on the merits of the evidence, painstakingly collected over a period of three years by Police investigators, and after both he and the Chief Prosecutor had gone through the evidence with a fine tooth comb, but that he was weak – and therefore, he succumbed to public pressure. He as much as accused him of betrayal. Wrapped up in his self-righteous tirade, Netanyahu was unaware of the implications of this statement; that he was the one who personally appointed a person to the most senior legal position in the country, who makes the most momentous legal decisions with potentially earth-shattering political consequences, without regard for facts and evidence. If this is true, I shudder to think about the nature of the legal advice this “weak man, who caves under pressure” has given our government for the last four years.

In reality, nothing could be further from the truth. The strength of character displayed by Avichai Mandelblitt, is not only something to be admired, it is something for which we should all bow our heads in expression of the deepest respect. In his capacity of legal advisor to the government, he sits for hours, working closely with Netanyahu, sometimes in private consultation, while at the same time, in his capacity as the ultimate authority in deciding whether to indict him, he knows every little detail of the investigations into his corruption. The strength of character required to perform both these tasks and keep them compartmentalized, without divulging details of the investigations to Netanyahu, is unimaginable. Netanyahu has proven by his own behavior, that when it comes to his political survival, he does not respect boundaries; his maneuverings and manipulations which have enabled fascists to enter the Knesset and has promised them a seat on the Judicial Appointments Committee, is stark evidence of that. So, one can only assume that Netanyahu would have been applying pressure on Mandelblitt to reveal details to him. For Maldelblitt to withstand that kind of pressure, applied by his patron, the most powerful person in the country, the very person who appointed him to this lofty position, is remarkable. And, he is accused of caving to public pressure. Hmm.

Mandelblit has served Israel with dedication his entire working life. At the age of eighteen, he deferred his enlistment into the army within the framework of the “Atuda” program, in order to study law. Upon earning his degree, he joined the Military Advocate General’s Office of the IDF. During his twenty-four years in the IDF he served in a variety of capacities, including both Chief Military Prosecutor and Head of the Chief Military Defence. In 2009 he was appointed Chief Military Advocate General, and promoted to the rank of General. He was a passionate advocate of Israel’s legal position, when Israel came under withering attack with regard to breaching international humanitarian law and the commission of war crimes. His impassioned rejection of the Goldstone Report, is probably what moved Netanyahu to offer him the position of Cabinet Secretary upon retiring from the IDF. It is clear that Netanyahu and Mandelblitt worked well together. Which is not surprising. Both share Revisionist Zionist provenance. Netanyahu’s father was Jabotinsky’s personal secretary before becoming a renowned historian. He was always considered a prominent Revisionist thinker. Mandelblitt’s father fought with the Irgun and later became a founding member of the Herut Party, under Menachem Begin. So, ideologically, it would seem that their views are not far apart. After three years serving as Cabinet Secretary, Netanyahu appointed him to become Israel’s Attorney General, without even a single day of cooling off period. This was the ultimate endorsement of the confidence Netanyahu had in Mandelblitt, in both his abilities and his loyalty. Or, so it would seem. 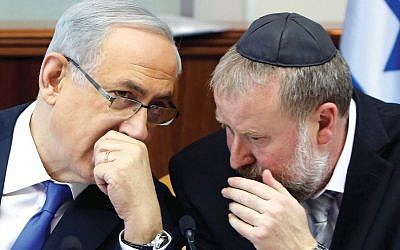 Netanyahu and Mandelblitt, working closely together.

I admit that I had my doubts about Mandelblitt’s appointment. Already in early 2016, reports about the Netanyahu’s receiving exorbitant gifts from his rich friends, was becoming known to the public. It felt like this time, something would stick. I saw this appointment – even then – as a cynical attempt by Netanyahu to protect himself from investigation and prosecution. Netanyahu is known for his political foresight as well as his well-honed instincts for self-preservation. This looked to me like something straight out of his playbook. My doubts grew stronger, as we witnessed the investigations dragging on for years, without the Attorney General making a decision. I saw this prevarication as a transparent attempt by Mandelblitt to protect his patron, out of loyalty. I now know that the reason why the investigation took so long, was that every stone they turned, revealed something more that needed to be investigated, evidence of more and potentially deeper corruption, involving more people who needed to be questioned – which is why the inquiry dragged on. It must have been both shocking and daunting to be witness to the depth and breadth of such corruption, as one case gave birth to yet another, which also needed to be investigated.

Mandelblitt was in a position of conflict of interests from the moment he was appointed to the position of Attorney General. This was Netanyahu’s intent from the beginning; to have a person in the key position of Attorney General, at the critical crossroads between investigation and prosecution, who would be beholden to him for his success, advancement and prospects of a Supreme Court position. From Day One, Mandelblitt was placed in the invidious position of having to choose between loyalty to his patron and loyalty to the law. Which is what makes Mandelblitt’s decision to indict in all three cases all the more remarkable.

We can argue about what Netanyahu has substantively achieved after being in office for a decade. Personally I think precious little. Some may point to new diplomatic initiatives and the strength of our macro economy, which somehow never filters down to the middle and lower classes, as an achievement. Or keeping a nuclear Iran at bay. However, Netanyahu’s lasting legacy is not his alleged personal corruption, but rather his corruptive influence on our political system and public service. It is the flames of divisive and acrimonious discourse, which he takes gleeful pleasure in fanning. It is how he has filled us all with a cynicism, where we have come to accept and believe that the entire system is corrupt and everyone is either corrupt, or corruptible, where expendability and expedience will always be preferred to principles, decency and what is right. And, there is nothing we can do about it. Mandelblitt is proof that we can do something about it; that the cynical expedience can only go so far.

I am reminded of Sir Thomas More, councilor to King Henry VIII and Lord High Chancellor of England (the equivalent today of attorney general). He was known as a man for all seasons, because of his ability to successfully weather changing political circumstances. However, faced with the crisis of King Henry VIII’s demand to separate England from the Catholic Church, and to grant him an annulment of his marriage to Catherine of Aragon so that he could marry Anne Boleyn, he stood firm and placed his beliefs above his position and loyalty to the king. In so doing, he was charged with treason and executed. He is remembered, venerated for being true to his principles. Mandelblitt is our man for all seasons. 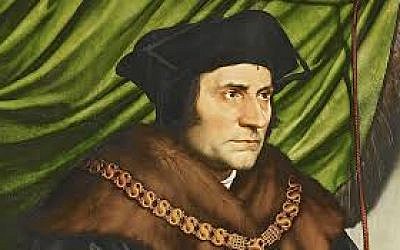