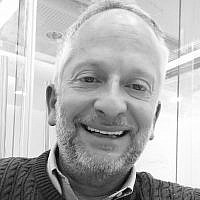 The Blogs
Stuart Chesner
Apply for a Blog
Advertisement
Please note that the posts on The Blogs are contributed by third parties. The opinions, facts and any media content in them are presented solely by the authors, and neither The Times of Israel nor its partners assume any responsibility for them. Please contact us in case of abuse. In case of abuse,
Report this post.

It seems so pointless and tragic; children transformed into murderers. Thirteen, fifteen, sixteen are the ages of many who have murdered in the name of God. Israel is in the midst of seemingly random, unpredictable knifings by the youngest group of terrorists that we have ever encountered. Can this horrific wave be stopped? Recent polls indicate that close to two-thirds of Israelis do not feel that the government is responding effectively. But is there anything that we can really do?

I think the answer is yes. But first, we need to dispense of many long-held misconceptions about the roots of terrorism. Terror is somewhat correlated with poverty, however many terrorists are products of middle class educated families. Terror is correlated with perceived political oppression, however history is replete with numerous examples of political oppression where the oppressed did not opt for terror as the means of releasing the shackles of oppression. Remember Gandhi or Martin Luther King? Many terrorists are religious, however here too we err if we assume that religion is the cause of terrorism. The overwhelming majority of people throughout the world of all religions, find terrorism to be anathema to the principles of religion. In addition, the terrorist stage has been shared by many secular, radical nationalist groups, who have absolutely no connection to anything religious.

I suggest that the underlying cause of terrorism is an educational/ideological system that glorifies murder as the ultimate expression of human meaning. Viktor Frankl, founder of the psychological school of logotherapy, framed meaning as the essence of all human existence. He stated that meaning may be attained either through creativity, love or suffering. Terrorists perceive their existence as one of suffering. The suffering may be material, physical or spiritual. Their acts of terror provide an answer to the existential issue of human suffering. Although economic conditions and military conflict may correlate with the terrorist act, terrorism will never “catch on” unless it is nourished and nurtured by educational institutions that glorify and sanctify it.

Israel has failed to eradicate terrorism because the bulk of its efforts have focused on destroying the terrorists military enclaves and operations. We have garnered the courage to destroy a terrorist’s home. We invest millions of dollars in constructing security fences and intelligence services. We risk our soldiers’ lives by carrying out raids in Palestinian controlled areas in efforts to arrest terrorists before they act. No doubt these actions are essential. However, other than what have become feeble condemnations by numerous politicians against Palestinian incitement of terror, we have acted lamely and without conviction in our attempts to uproot the root of terror — education and ideology

There are three primary sources that contribute to the educational/ideological infrastructure of terrorism. First is the Palestinian press and media. Anyone familiar with the vulgar expressions of Jew-hatred that are rampant in Palestinian TV or social media cannot help but be reminded of Nazi propaganda. It appears that the Palestinians have consulted with Josef Goebbels as their primary inspiration for propagating their spin on Jews and Israel.

Second, Jew-hatred and the legitimacy to murder is propagated by the Palestinian school system. Textbooks are filled with virulent messages that dehumanize the Jew and de-legitimatize the State of Israel. It is not surprising that on maps of the Middle East, Israel does not appear.

Third, the mosques of radical Islam preach that butchering Jews is a holy religious task to be rewarded both on this earth and in the world to come.

Israel needs to wage a relentless war against these sources of terrorism. Teachers that preach jihad must be removed from their classrooms. Preachers who encourage congregants to join the ranks of the shah-ids must be removed from their pulpits. The plug must be pulled on all media that encourages terrorism and vilifies Jews as being sub-humans worthy of extermination.

The European Union pours millions of dollars into Arab and Palestinian organizations that make little attempt to cover their terrorist underpinnings. Recently, the United States Secretary of State, John Kerry admitted that it is quite likely that monies that are being given to Iran will, in fact, fall into the hands of terrorists.

We may not be able to stop the insanity of the rest of the world, but can’t we choose to act sanely in order to defend our families and children? The State of Israel itself is transferring millions of dollars to the Palestinian Authority. Should not these grants be conditional upon the total cessation of all incitement against Jews in schools, in the media and within mosques? Doesn’t Israel possess sufficient military power and military intelligence to seek out those preachers and teachers who glorify terror? Can’t we close universities, mosques and schools that teach their students to destroy us? Do we not possess the hi tech sophistication to block web sites that teach the art of knifing or bomb making? Do we not possess the intelligence capabilities to track down those who initiate, instigate and support these sites?

The most powerful response to terrorism is to utilize our financial and military power to stop any organization that preaches terrorism as a legitimate expression of man’s search for meaning. Any schools that receive funding yet support terror must be closed. Funding for the Palestinian Authority must cease as long as they incite their people through the media, schools and mosques to support terror against Jews. Mosques and Holy men who preach terror must be silenced. Military responses to acts of terror will magnify in their effectiveness when the ideological roots of terror have been uprooted from their fertile soil.

Oliver Wendell Holmes in defining the limits of freedom of speech said that the right of free speech does not confer the right to shout “fire” in a crowded theatre. The educational system of Palestinian society is shouting fire and espousing murder.

What is preventing us from responding forcefully? Jews are known as people of the book. We have sanctified and elevated education to highest level of our ideological pyramid. Psychologically, we have a knee-jerk reaction against any sort of censorship that limits expression of speech and freedom of education. Right now, the Palestinian leadership is exploiting our innate respect for education in order to sow the seeds of terrorism in the next generation. The average age of today’s terrorist is much younger than at any other time in history.

Israel has the means to stop this tragedy from spreading. Until now, we have not mustered up the collective will to use our strength to strike at the head of the terrorist monster. Until this happens, we will continue to bury our dead, brutally murdered by children who have drank from poisoned wells. It is time that these wells be closed. We can depend upon no one other than ourselves to do this job. Our lives hang in the balance.

About the Author
Dr. Chesner is a clinical psychologist who has written three best selling books in Hebrew on children with attention deficit hyperactivity disorder. He has founded Bnei Chayil (bneichayil.org.il) and Matara - a Jewish Therapeutic Boarding School for Teenagers (jewishresidentialtreatment.com) and and setup programs in Israel for students with ADHD, Autistic Spectrum Disorder (Asperger's) and other neuropsychological issues. Most recently, he has founded a Pre-Military Academy for foreign students in Israel.
Comments