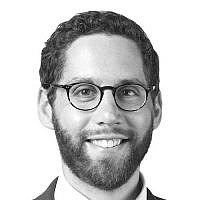 The Blogs
Ari Hart
Apply for a Blog
Please note that the posts on The Blogs are contributed by third parties. The opinions, facts and any media content in them are presented solely by the authors, and neither The Times of Israel nor its partners assume any responsibility for them. Please contact us in case of abuse. In case of abuse,
Report this post.

Rebbe Nachman of Breslov had been brooding silently for many long minutes at his Shabbos tish, when he suddenly shouted:

“There is no such thing as despair in the world, at all!’

“Really?” His chassidim must have wondered.

They lived in a world where there seemed to be plenty of yeush, despair.

Even their own rebbe seemed at times to struggle with despair.

And of course, they all knew that yeush most certainly exists as a principle in Halacha!

The principle of yeush emerges from a mitzvah found Sefer Devarim, the fifth and final book of the Torah that we are reading from now. Yeush emerges from the mitzvah of hashavat aveidah, the returning of lost objects.

“If you see your fellow’s ox or sheep gone astray, do not ignore it; you must take it back to your fellow.”

We learn from this mitzvah that a finder must go to great lengths to return any object that is recognizable and of some basic value. It is said that in the great yeshiva of Kelm, someone left an umbrella. When he came back 13 years later, the umbrella was in the exact spot where he left it with a note saying advertising its loss. Hashavat aveidah.

There is, however, a situation where the mitzvah to return a lost object does not apply. The Gemara in Bava Metzia has a fascinating discussion about the concept called yeush, despair. When you are mityaesh an object, you despair of having it back, and if someone finds it, they are legally permitted to keep it. Yeush therefore severs the connection between you and the object.

There are two ways yeush can happen. The first is if the loser announces that he or she has despaired of the object: “I lost my umbrella and I have despaired of finding it again.” Once it has been publicly announced, any finder may keep the object.

There is something discussed in the gemara that causes this kind of yeush, something so massive and disruptive to human life that it automatically causes halachik despair on any object that it encounters.

Flooding, by river, flooding by an ocean, causes a halachik yeush, a despair of property that effectively renders everything caught in its devastating wake, ownerless.

We in the United States have been made painfully aware over the last few weeks of the despair caused by flooding.

Between Hurricane Harvey and Hurricane Irma, our nation has experienced dozens of lives lost, thousands of people rescued from their homes, hundreds of thousands in shelters, billions of dollars in damage.

In addition to the numbers, we’ve seen the images and videos: Streets that have become rivers, children rushed out of flooded homes by emergency personnel, people facing great and painful loss. Many of us know people, friends and family, who have been deeply affected.

The despair has not been limited to the United States. This summer, catastrophic monsoon flooding in india, Nepal and Bangladesh have led to the deaths of over 1000 people, and have affected some 40 million people there.

We cannot turn away.

The verse from Devarim about lost objects includes the words:

You cannot turn away. Rashi explains:

You cannot cover your eyes and make it as if you cannot see.

Lo tuchal lihitalem, we cannot look away as our climate changes and the seas warm, providing more energy for these devastating storms.

So in light of all the halachic category and the general despair that we sometimes see in the world, what could Rebbe Nachman have meant – ain shum yeush ba’olam klal – there is no despair in the world at all!?

Rabbi Gabe Greenberg, a close friend of mine, who serves as the rabbi at Beth Israel, an orthodox synagogue in New Orleans, shared something with me this summer that might be an answer. He is the rabbi of a shul that was completely destroyed in Hurricane Katrina, and last year suffered a profound loss of his own: a house fire completely destroyed his home and all his family’s possessions on erev Pesach.

When he lost everything it was a very difficult and dark time for his family. Thank God they were not physically harmed, but the spiritual impact of having lost all his possessions, every trace of his life, brought feelings of yeush, despair. How could he rebuild, replace, when everything had been so quickly, so mercilessly destroyed?

And he was stuck in that feeling for a few days, until he discovered something. One set of his possessions had not been lost. Suddenly his despair was transformed when he realized that he had hundreds, if not thousands of his things still in the world that had not been burnt in the fire.

He had all the things that he had given away to others.

What remained of Gabe and his family’s physical existence were the gifts he had given, the books he had lent, the clothes he had handed down to others. These things had not, and could not, be destroyed by any one fire or flood. They remained.

The only thing that remained, the physical trace of his existence really, were things he had given away.

The possessions we try and hold on to we will ultimately have to go let go of – whether through fire, or flood, or the end of a life. They are ultimately lost to us.

The things we give away, however, last. Even when our hands can no longer grasp anymore. The chessed endures.

The only way to endure is through giving.

And then when he realized this, he allowed himself to receive. To be a part of the chain of chessed, of love and compassion, that began when Hashem created the world, as the as an expression of chessed and ahava, of giving and love.

A chain, expressed perhaps in the language of our parsha:

Perhaps best translated as: you will not be able to turn away.

Note the language. Not, you must not turn away, al titalem, or asur lehitalem, it is forbidden to turn away. The language here is descriptive instead of prescriptive – when you see this need you just won’t be able to not help.

Already as a shul we have raised money, sent supplies, reached out, joined with broader communal efforts, and more. And more will be called of us in the immediate future and in the farther future, as we respond to our changing climate and call on global leadership to address the changes we see unfolding before our eyes and to protect those most vulnerable.

Physical loss is real. And it demands our immediate and long term response – we cannot turn away.

But it is not the final story.

In my friend Rabbi Greenberg’s shul, the ark that was rebuilt after the devastating floods of Katrina, has this quote emblazoned across the top:

Maybe that’s what Rebbe Nachman meant. Yes, there is loss and despair and suffering and pain in this world, When we respond to loss with love, to challenge with faith, to despair with hope, ultimately, even the deepest despair, ultimately, even the mightiest of waters is overcome, by the power of God and love. Despair comes, but like a flood it ultimately recedes. Love endures.

As we say in our davening each friday night from Psalm 93:

Above the thunder of the mighty waters, more majestic than the waves of the sea is God, majestic on high. Your testimony endures; holiness befits Your home, God, for all eternity.

About the Author
Rabbi Ari Hart is the spiritual leader of Skokie Valley Agudath Jacob, a modern orthodox synagogue in Skokie, Illinois.
Comments