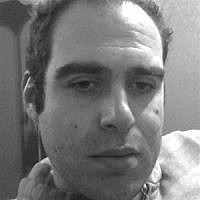 In a recent article (“Why I Applaud The NFL Players Who Spoke Out Against Israel“) addressed to Michael Bennett and the other NFL players who recently boycotted a trip to Israel, author and activist, Marc Lamont Hill urged the “players to consider the political ramifications of attending the trip, the letter drew on the undeniable connections between the struggles faced by Black and Brown communities in the U.S., and Palestinian, Afro Palestinian, Eritrean and Sudanese communities in Israel and Palestine.”

Hill, however, neglected to mention the struggles faced by Africans in Arab countries. The omission is puzzling, since Hill recently experienced Arab racism first hand while in Egypt on December 30, 2016:

Hill concluded his stop was attributable to White Supremacy, suggesting Arabs are incapable of racism without western influence. That argument would be more plausible if Hill was referring to former colonies like Haiti or Rwanda, where the European colonists created racial division among the local populaces, but the Arab countries, which have been engaging in the African Slave Trade long before the start of the Atlantic Slave Trade? The same Arab Slave Trade that was in some instances far more brutal than the Atlantic Slave Trade; for instance, Arabs would castrate their African slaves (discussed by Dr. Marcus Garvey Jr., son of Marcus Garvey who founded the Negro Improvement Association in America)?

As an aside, Garvey also mentioned some of the slave merchants and financiers were Jewish, Garvey was, however, incorrect to portray that participation as being collective among Jews. The roles of Jews in the Atlantic Slave Trade as merchants and financiers were “extremely marginal.” Louis Farrakhan the former leader of the Nation of Islam and arguably an anti-Semite, claimed in his book, “The Secret Relationship,” the Atlantic Slave Trade was “dominated” by Jewish merchants and “75 percent of the slaves owned in the South were owned by Jewish slaveholders.” Farrakhan also claimed Harold Brackman’s 1977 dissertation for the University of California, Los Angeles, on the history of black-Jewish relations supported his claims in “The Secret Relationship.” Brackman refuted his dissertation supported any of Farrakhan’s conclusions in a letter to the New York Times, “Jews Had Negligible Role in Slave Trade.” Brackman also claimed the role Jewish merchants played in the Atlantic Slave Trade was marginal, citing Jacob Rader Marcus, who argued the role played by Jewish merchants accounted for “considerably less than 2 percent” of the traffic. Brackman further claimed it was impossible for 75% of the slaves in the South to be owned by Jewish slave owners: “In 1860, there were about 15,000 Southern Jews and 4 million slaves. If 3 million (75 percent) were so owned, this would mean 200 slaves for every Jewish man, woman and child, or 1,000 slaves for every Jewish head of household. Jews owned only a fraction of 1 percent — thousands, not millions — of the enslaved population.”  Winthrop D. Jordan’s article in the Atlantic, “Slavery and the Jews,” also refuted Farrakhan’s claims.

As for slavery in the Arab world, John Alembillah Azumah, author of “The legacy of Arab-Islam in Africa,” argued the expansion of Islam into Africa and the dehumanization of “non believers” under Islamic Sharia Law created the Arab Slave Trade. Azumah also posited the reason African slaves where castrated was, because, the Arabs believed Africans had an “ungovernable sexual appetite.” Azumah also noted Arabs distinguished between Black and White slaves, referring to White slaves as “Mamluk” and to Black slaves as “Abid.” Further, Azumah mentioned the Arab historian, Ibn Khaldun, wrote “the negro nations are as a rule submissive to slavery, because they have attributes that are quite similar to dumb animals.”

The Arab Slave Trade, unlike the Atlantic Slave Trade, is still ongoing in Arab countries like North Sudan and Mauritania, and oppressive conditions still exist in many other Arab countries. In Kuwait (“There are still slaves in the world” 1964), it was customary for rich Kuwaitis to give their children an African slave as a birthday present.  Slavery was abolished in Kuwait in 1963, but abuses of migrant workers still persists in Kuwait according to Human Rights Watch.  Slavery was abolished in Saudi Arabia in 1962; in Yemen in 1962; in the United Arab Emirates in 1963; in Oman in 1970; and in Qatar 1952. However, despite the abolition of slavery in Qatar in 1952, it was still practiced 12 years later when the documentary,”There are still slaves in the world,” was filmed in 1964.  Qatar recently abolished its “Kaflar” system that forced foreign workers to seek their employer’s permission to change jobs or leave the country and Qatar has been accused by Amnesty International of using forced labour to prepare for the 2022 World Cup.

In addition to avoiding the issue of Arab racism entirely, Hill also finds it paramount to combat unfair criticism of Islam, which he deems to be a form of racism. On CNN Hill argued Sam Harris’s critique of Islam–that “Islam was the mother-load bad ideas”–was unfair, when viewed in the context of other religions, and “racist,” despite the fact that Islam in not a race.  However, Sam Harris has never examined Islam in isolation, but rather through the lenses of other monotheistic faiths, such as Christianity and Judaism. Harris even had argued the Old Testament has verses that are even more violent than the Quran’s.

Hill’s his accusations of Israeli racism, while ignoring the far more serious Arab racism, and his hyperbolic shielding of Islam from objective criticism as racist, raises questions of a possible bias Hill might have in favor of both Arabs and Islam.  In another CNN debate, Hill stated, “I’ve read the Quran thousands of times in Arabic.”  Undoubtedly, reading any work a thousand times goes well beyond the realm of scholarship, let alone in Arabic, which is not Hill’s native language.   Further, Hill’s voracious reading of the Quran seems to comport more with a religious reading of the Quran.  Devote Muslims can claim to have read the Quran thousands of times in Arabic, because they practice and study the Quran daily.

However, being Muslim does automatically mean Hill has a bias against Israel or that he would purposely ignore the racism of Muslim Arabs towards Africans in North Africa and the Middle East. Yet, that possibility should not automatically be dismissed, either. There is a prominent Black Islamic organization in America that has unequivocally been shown to put its own interests before Black Americans, while simultaneously advocating for the rights of Black Americans.  That organization is the Nation of Islam, which came to prominence under the Honorable Elijah Muhammed (“Muhammed”), and Hill has professed to be influenced by Muhammed:

A short but beautiful conversation with The Honorable Minister Louis Farrakhan. I did more listening than talking, but I did manage to tell him about the influence of The Honorable Elijah Muhammad on my formation and consciousness to this day. 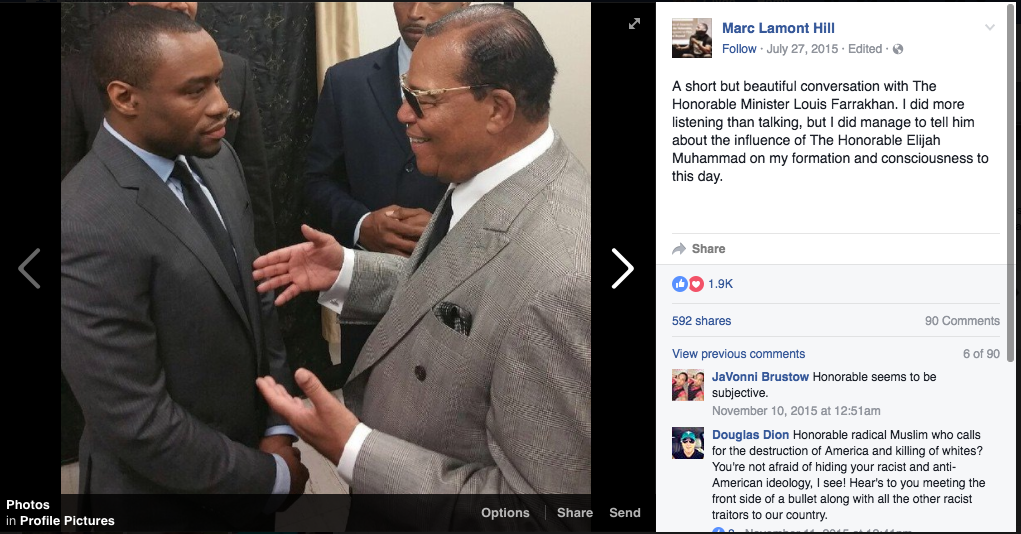 It is also no secret that Malcolm was no supporter of Israel; however, Malcolm was never deceptive in any of his claims and candidly believed them to be true when he made them, and he genuinely cared about the civil rights of Black Americans.  For instance, when Malcolm realized after traveling to Mecca that Islam as it was taught by the Nation of Islam was false (e.g. Whites were not capable of following Islam because they are inherently evil or that the Honorable Elijah Muhammed was a prophet), he changed his views and adopted mainstream Islam. Malcolm, from his exposure to White Muslims in Mecca, was also able to realize that for Muslim Whites, identifying as White had no substantial meaning, whereas for White Americans, identifying as White meant “boss.” Had Malcolm not been assassinated, he would have likely come to realize only White Supremacists in America identify as White. Jewish, Italian, German and Irish Americans, who have all suffered discrimination by White Supremacists in American, identify by their ethnic origins rather than their race.  White Supremacism in America, on the other hand, is limited only to actual racists who choose to identify with race over their own historic cultural-ethnic backgrounds, such as Richard B. Spencer and David Duke.

As for Farrakhan and Hill, both of them have questionable views on Malcolm. Farrakhan called Malcolm’s assassination deserved, a position he maintained until 2000, when he apologized for his views and statements on 60 Minutes with Mike Wallace. Similarly, Hill questioned the sexuality of Malcolm in 2006 — when he posted on his website: “Malcolm X Was Gay?” — but later claimed he was indebted to Malcolm and his legacy:

Why is Hill so vocal on Israel and so silent on the racism practiced in the Arab world is a question I do not have the answer to. Unfortunately, Hill’s animus towards Israel has never been clear and is usually couched in the Palestinian propaganda term, “occupation,” which is used by many Palestinian activists to justify the terrorism Israelis face on a daily basis. As to whether the “occupation” is genuinely Hill’s motive for unfairly condemning Israel, we can only speculate.

About the Author
Clyde Zamir graduated from the University of Miami School of Law in 2015. He is currently a candidate for an L.L.M. in Taxation at the University of Denver School of Law. Clyde created and ran a pro-Israel Facebook page, "Stop the Lies," between February and October 2016, and reached more than 20,000 followers within that time period.
Comments