Do you remember when the year 2020 seemed far off? 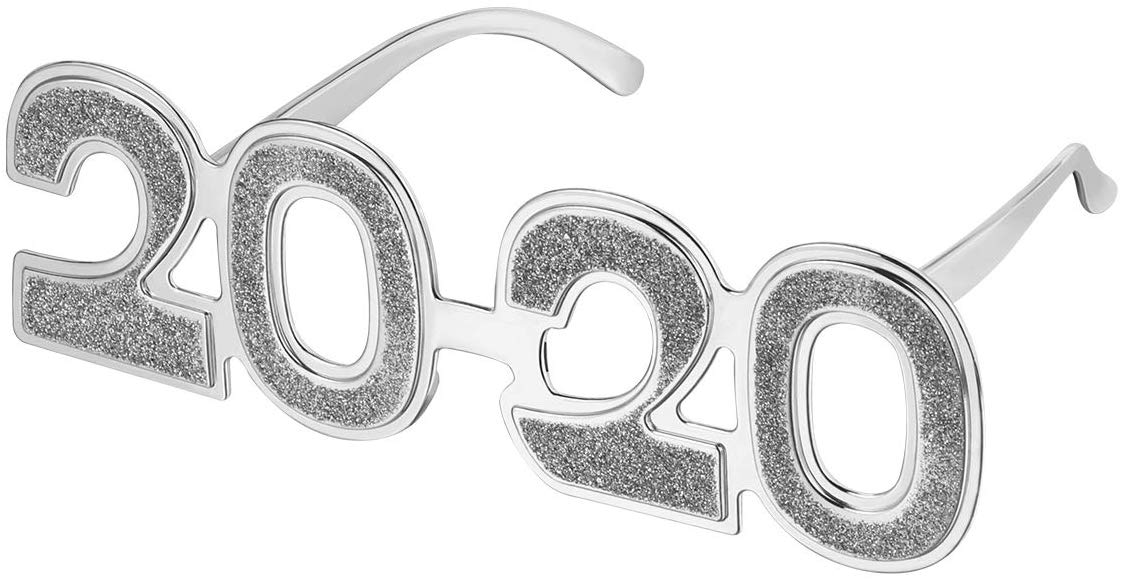 But, faster than I expected, it’s here.

And if you had asked me what would be the first rabbinic activity I would do in the year 2020, to start off this new decade, there is no chance I could have even imagined that my first action of 2020 would be responding to anti-Semitism.

But here we are.

Just after I came into the office on Thursday, January 2nd, I received an email about going to NY to the march against anti-Semitism and I decided that our community should charter a bus and participate in this rally.

It does seem ridiculous for this day and age, but that’s what we had to do. 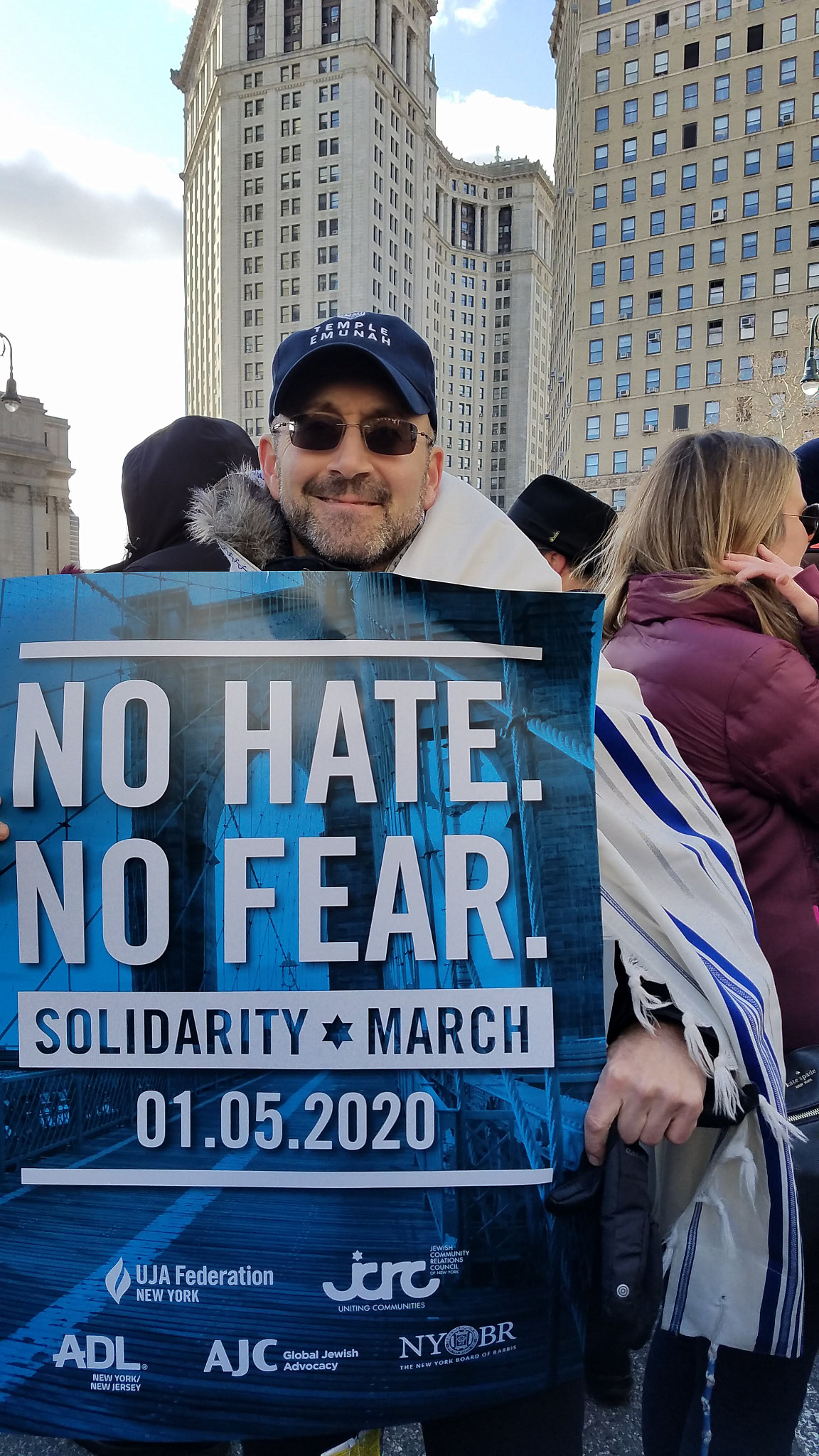 This time, it was to go and stand in solidarity with our sisters and brothers in NY.  The violent attacks and murders in Brooklyn, Jersey City, and Monsey have shaken Jews and others throughout the country.  And the Jewish community decided to stand up for ourselves, for each other.

Even though the attacks have largely impacted Haredi – ultra-Orthodox Jews, we stand in solidarity with all Jews.  Over the years, I have participated in many rallies – some for the Jewish people and Israel like the famous gathering in Washington, DC in 1987 for Soviet Jews.

In 2002, I helped bring over sixty people from my synagogue outside of Chicago on flights and buses to Washington in support of Israel.

When I first arrived here at Emunah, 33 of our members flew to DC to support the people of Darfur.

And locally, we have rallied in support of Jews and Israel including numerous gatherings for Israel right here at Emunah.

And many, many rallies on behalf of striking workers, victims of gun violence, immigrants, and the LGBTQ community.  Most of these rallies have been to help other people in need.

But this time it was to help our own people, the Jewish community.  We filled our bus with adults and students of all ages from kindergarten to college, from retirees to rabbis.  While most of our group was from Temple Emunah, some were from other communities who heard we had our own bus.

I want to stop and acknowledge how awesome our community is – in a moments’ notice, we stand up.  Our leadership, led by Judy Zola, our president, who attended this excursion lent their support. Our community simply responds and does the right thing.  We were one of the only shuls from so far away to shlep to this march. 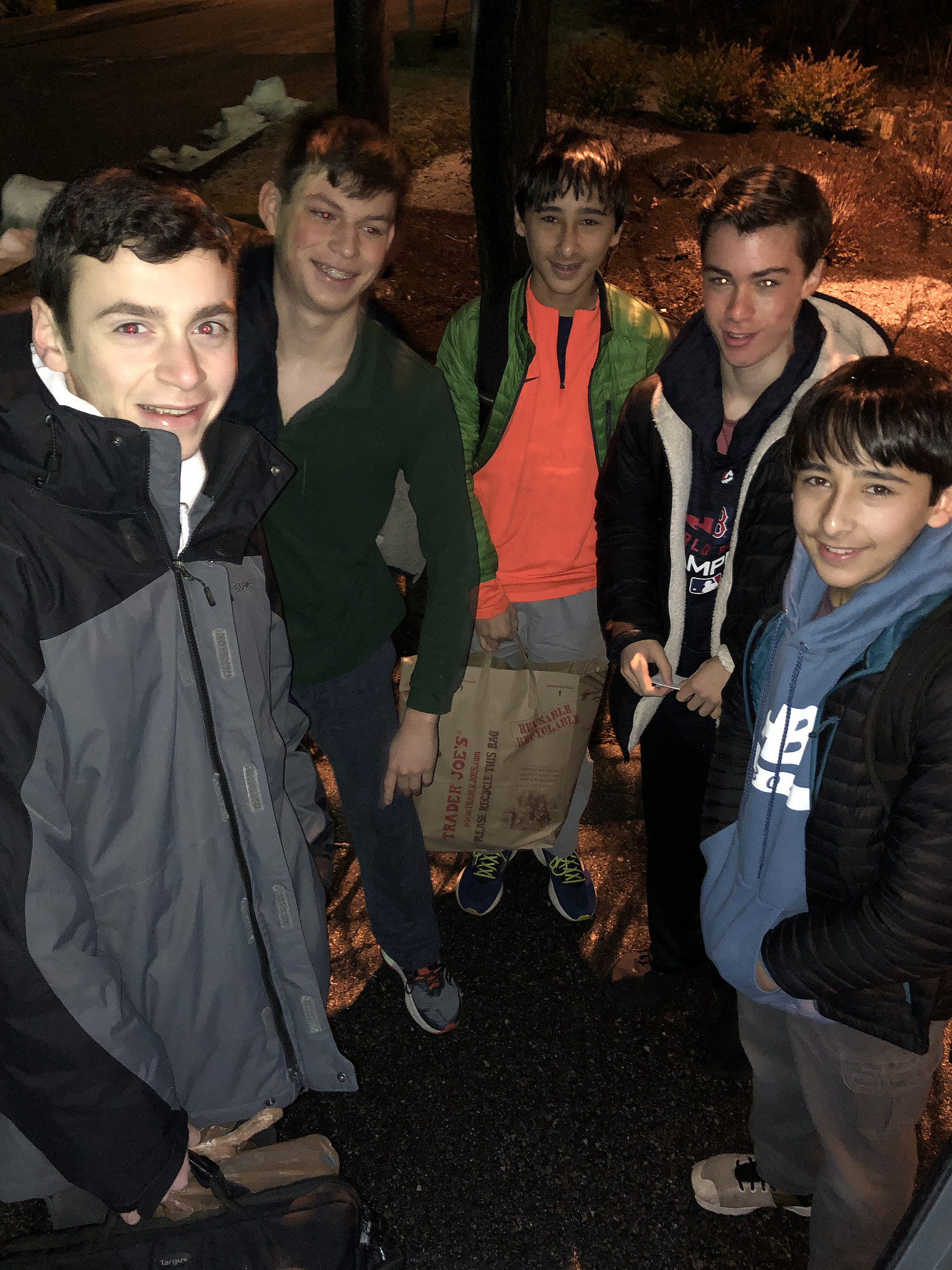 And it was a shlep.  We met at 5:30 AM in the dark, boarded our bus and drove to Lower Manhattan.  There we joined with two other buses coordinated by CJP, which brought others from the Boston Jewish community, and I want to thank CJP for covering the cost of our bus.

It was cold, but we were encouraged.  We saw a large group from Cleveland who had traveled 10 hours through the night to be there.  We saw many Jews from Reform, Conservative and Modern Orthodox streams of Judaism. There were signs.

They proclaimed: Am Yisrael Hai – the Jewish people live.

Haters will not replace us. 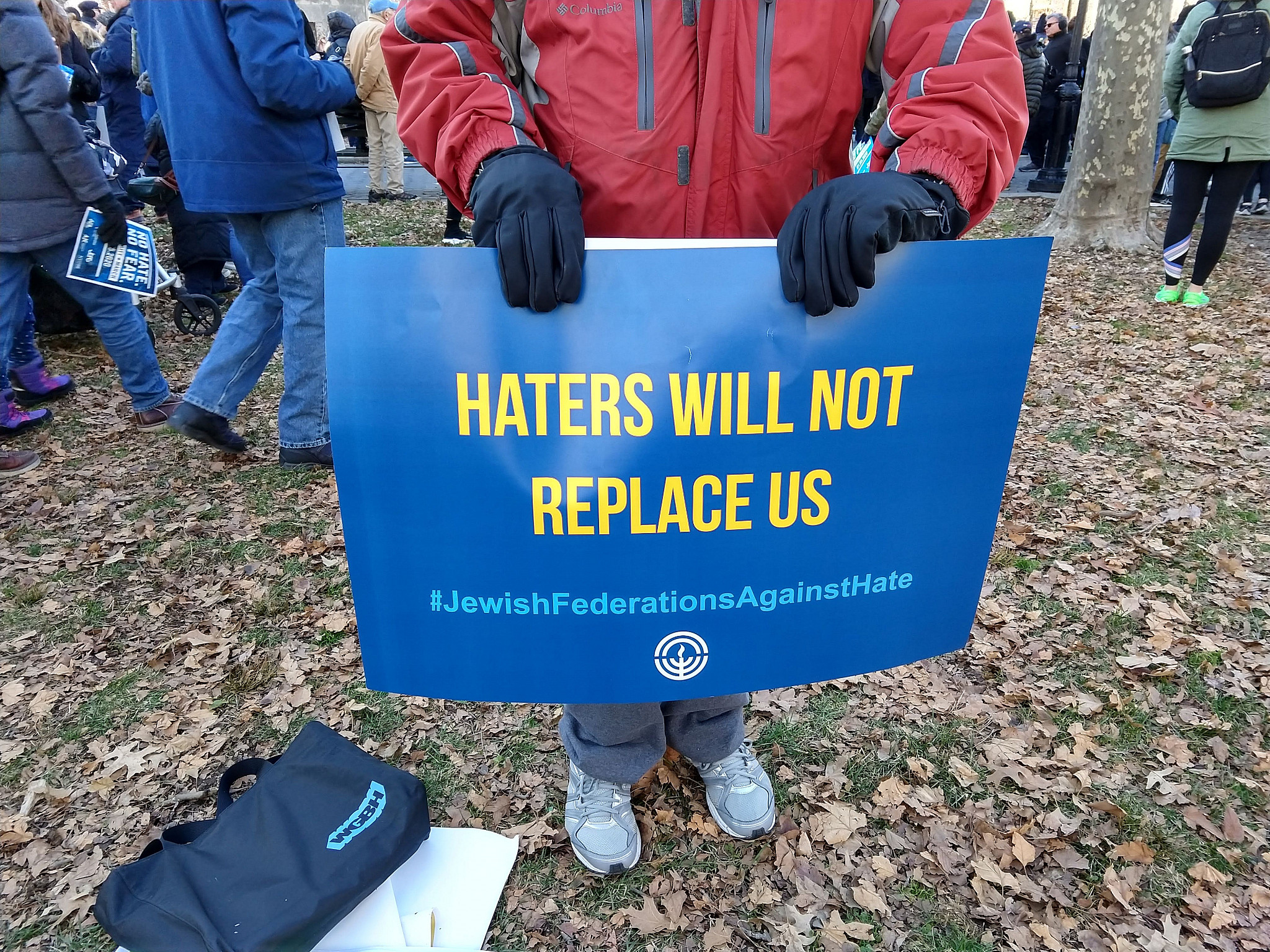 Discrimination is not kosher. 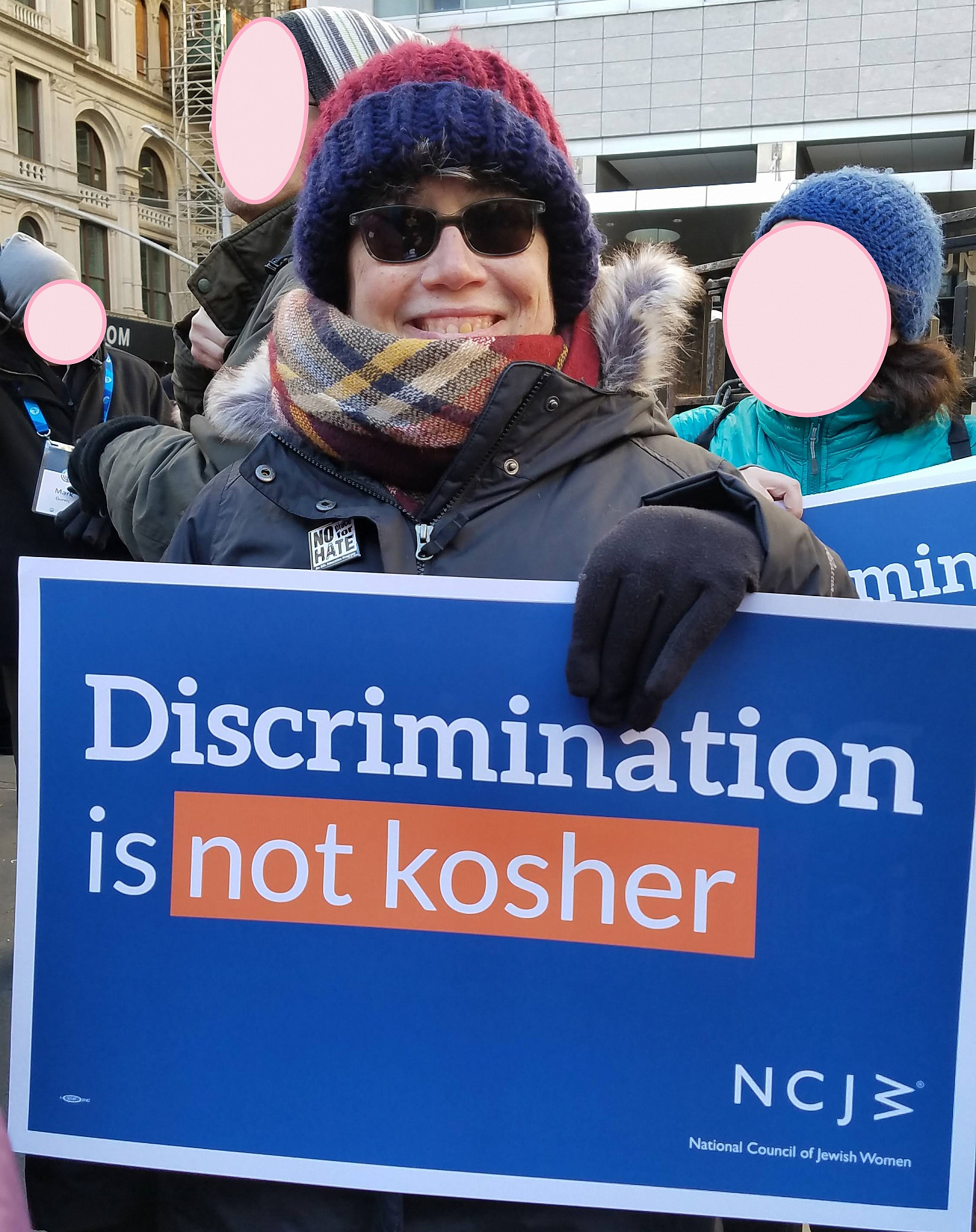 No Hate. No Fear. 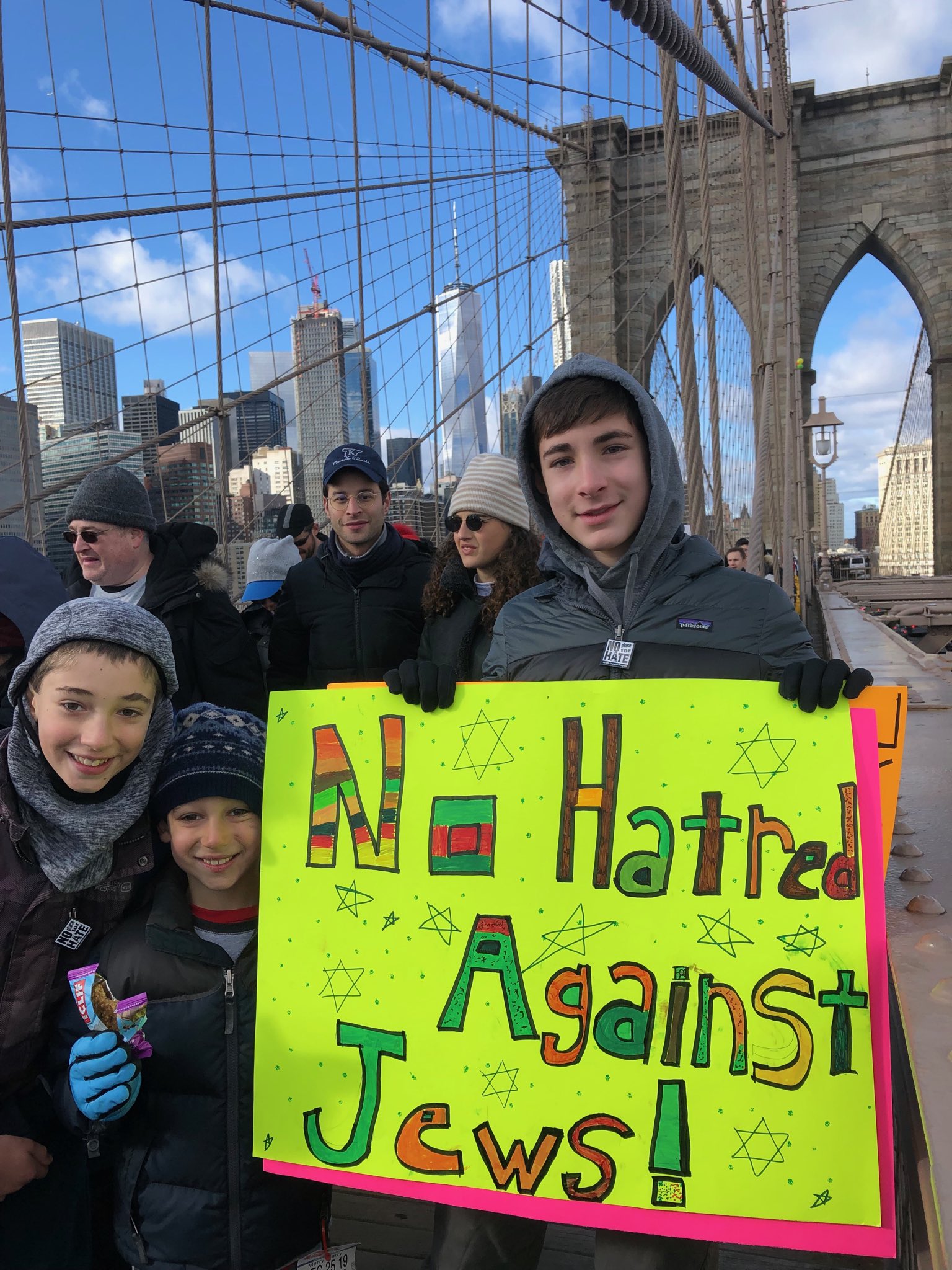 We had our own signs like this one made up by some of our students.

We marched behind a banner that read Boston Stands Against Hate. 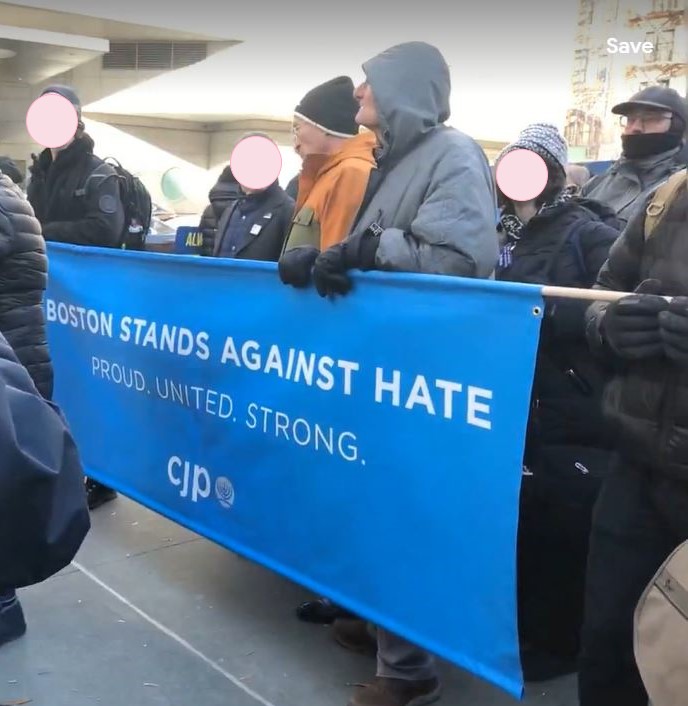 There was a man wearing a yellow Star of David, reclaiming this badge that was utilized against us during the Shoah.

It was powerful to be surrounded by 25,000 other Jews and our allies.  We walked, and bumped into people we knew: my college roommate, the dean of my rabbinical school who installed me as rabbi of Emunah, other rabbis, and dear friends from many places. 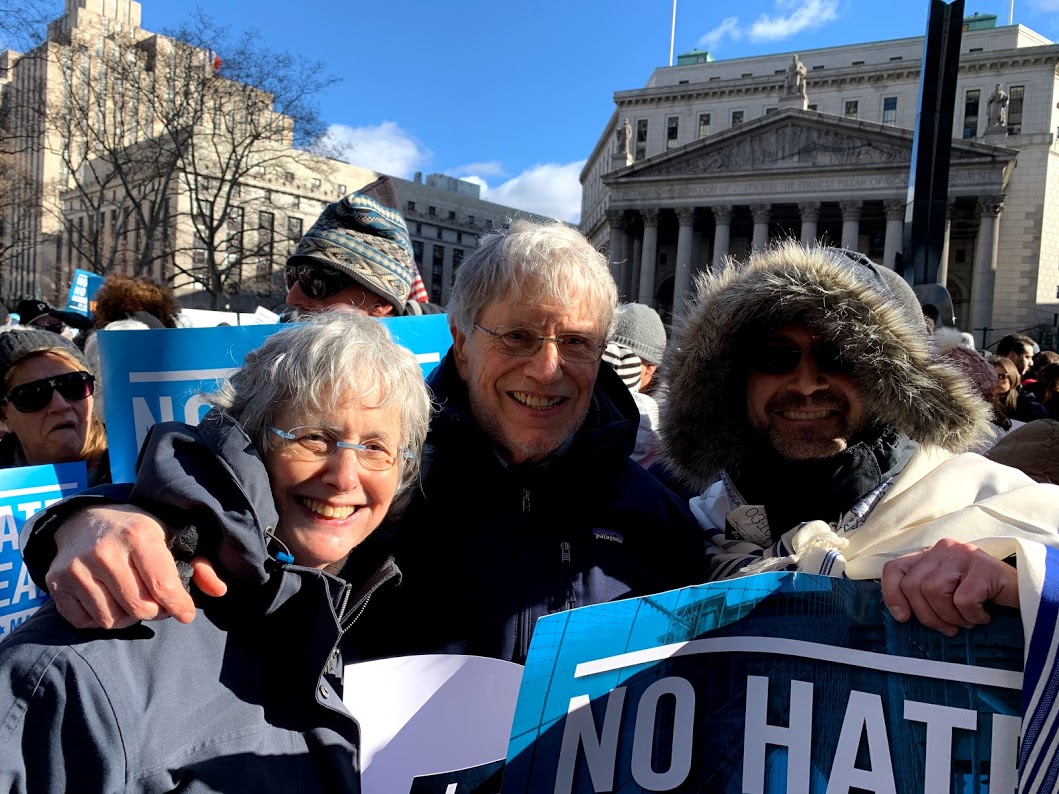 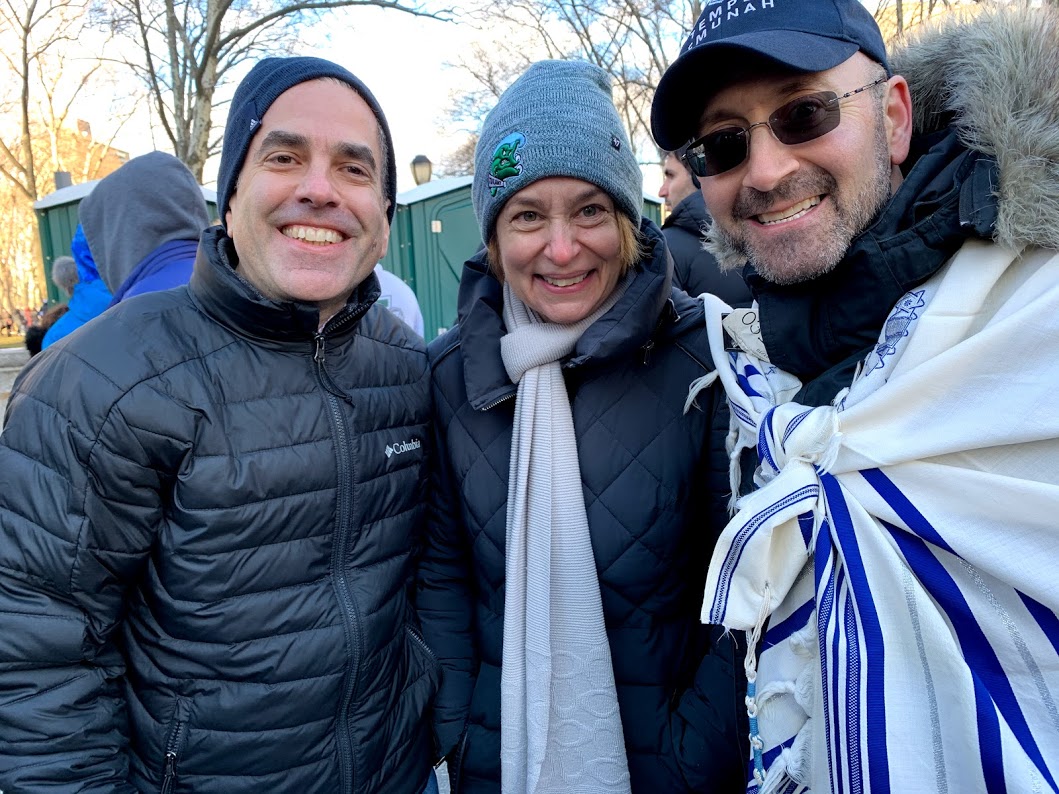 We walked slowly as thousands of people merged onto the Brooklyn Bridge.  As we crossed the bridge, the cold wind died down and the sun emerged from the clouds warming ourselves and our spirits. 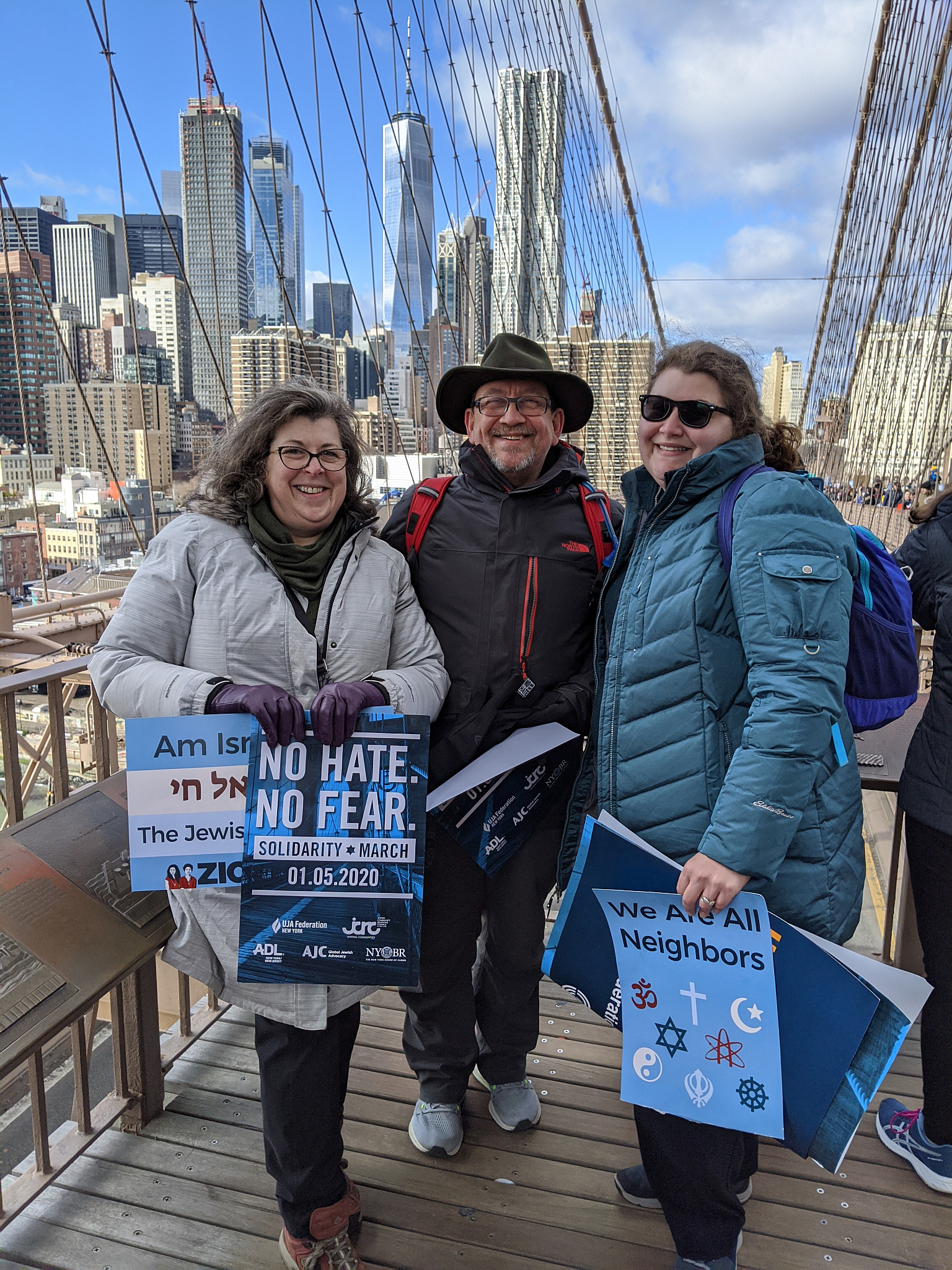 Walking over the Brooklyn Bridge was grand and we culminated the walk in a park in Brooklyn where speakers – both Jews and non-Jews outlined the seriousness of anti-Semitism. 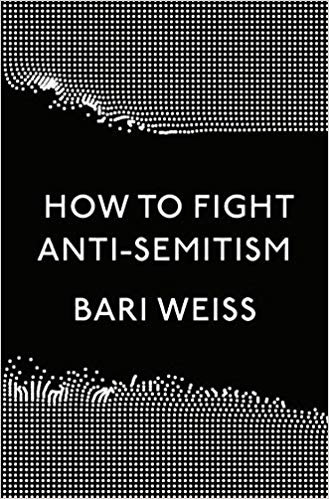 One of the speakers was Bari Weiss who recently wrote this important and pithy book: How to Fight Anti-Semitism.  I commend it to all of you as a critical book which explains how anti-Semitism today is coming from several directions – the far right, the far left and Islamic Fundamentalism.  This three-sided foe has made this moment a complex one.

How do we respond to this hate that is coming from several approaches?

She lists many ideas – too numerous for this talk.  But I was struck by two: first, to know who our friends are.  We are blessed to live in an extraordinary time where we have amazing support from our Christian sisters and brothers.  Since the recent anti-Semitic attacks, I have received many letters of support from Christian communities as well as other groups like Muslims, Hindus and Sikhs in our area.  Those bridges we have built with other communities should be strengthened and lifted up as examples of what the world could and should be.

Second, we should be proud of our Jewish identity.  We should wear our kippot, and Jewish necklaces and other symbols with pride.  We should not cower in fear, but now is a time to redouble our efforts to be unabashedly Jewish.  We should lift up the fact that we are the inheritors of a 4,000-year-old civilization. One that has introduced the most important ideas and values like democracy, justice, freedom and Shabbat – the weekend to the entire world.

Now is a time not to let the haters frighten us, but to truly celebrate our identity and the great freedom we have to express who we are in this great country.

We had a nice group of teens who joined us; some of their reflections: Joseph Hirsh: “I felt proud to march in solidarity with other Jewish communities. It was a good way to do something meaningful while bonding with my friends.” 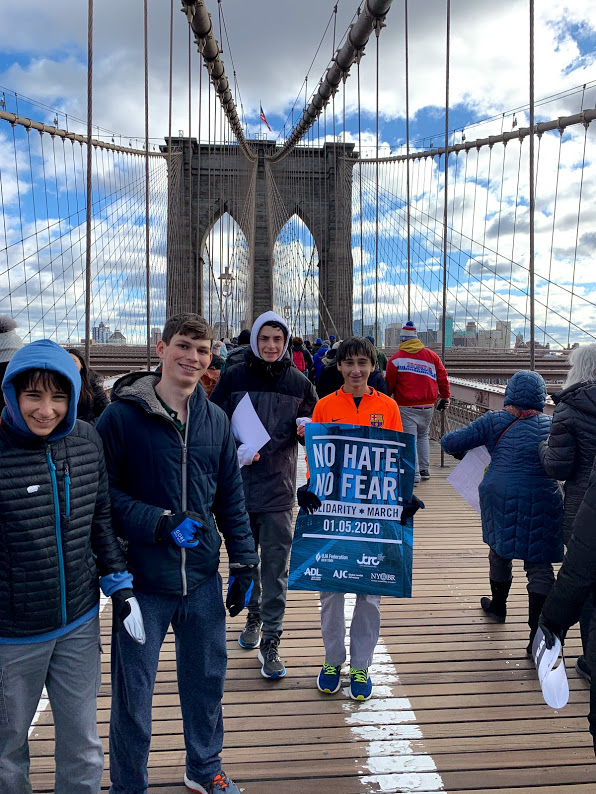 Sam Hirsh: “I was proud to be among the numerous Jews who came out to represent our religion and our people. The march felt both serious and celebratory, and this demonstrates that even in hard times the Jewish people still come together and feel joy.”

When Nadav Cutler, a second-grader, was asked on the bus home, what we should do in a moment like this even after the march?

He said, “We keep marching.  And learning!”

This morning, we read the Torah portion: Va-y’hi that describes the death of Jacob.  He blesses his sons and grandsons: Ephraim and Menasheh.  On Friday nights, we continue this tradition, by blessing our children with the words “Yesimkha Elohim K’Ephraim V’khim’Menasheh – may you be blessed like Ephraim and Menasheh.”

The question is why like the two of them and not like Abraham, Isaac, and Jacob?  A midrash points to a possible answer.  It describes how Ephraim and Menasheh, who grew up in a foreign land, with a different culture, were able to maintain their identity.

Jews living in the United States have to navigate complicated waters to celebrate our identity amidst hate and Anti-Semitism.

I believe that if we continue to stand up with others, build bridges with other communities, while standing even more strongly as Jews, we will endure this and future challenges. 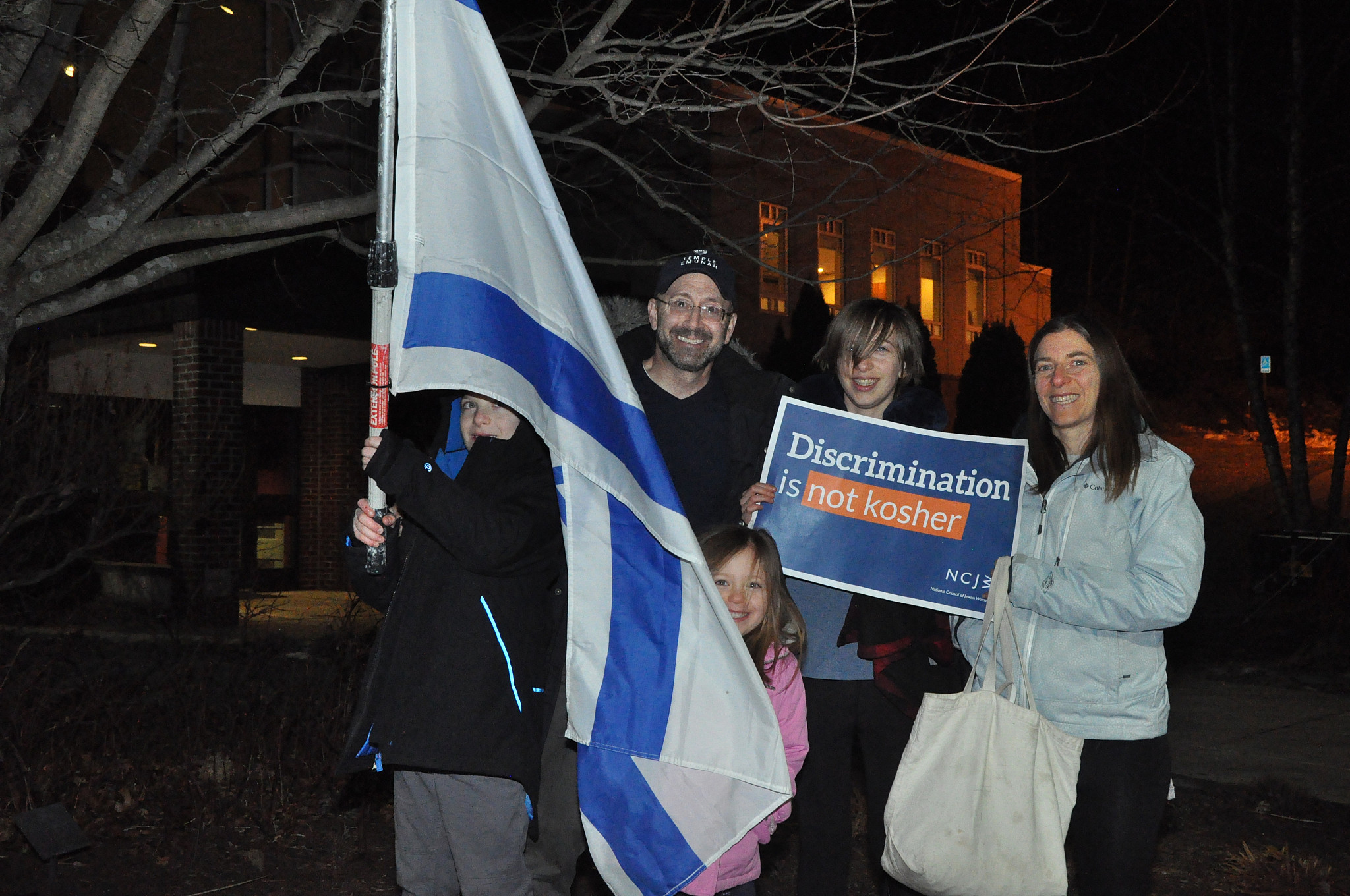 As we were getting off the bus on Sunday night after our 14-hour trek, a couple of Emunah families greeted us with a large Israeli flag, loud music, and great enthusiasm.

Our weary, but proud group disembarked from the bus.

One member of our group came up to me and told the story of how she was almost killed in the AMIA bombing in Argentina on July 18, 1994.  She told me how coming to this rally, was exactly what the Jewish community down there could not do.

Later in the week, she sent me a note: “On Sunday, with solidarity, in peace, with love, with no hate, with no fear, with trust & faith (bitahon & emunah) we walked, we shared, we marched as one, being one while each one of us was also unique & itself, thus making each number count for the big number. In the midst of pain & confusion is hard to believe that the sun will rise again, that every cloud has a silver lining…Perhaps that is the essence of what being Jewish is about and that is why we always say Lejaim with hope!”

The Jewish people’s response to hate and anti-Semitism over thousands of years remains to live life fully, proudly, and with hope.

May it always be so and let us all say, Amen.