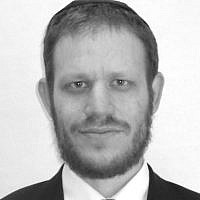 The Blogs
Akiva Herzfeld
Apply for a Blog
Advertisement
Please note that the posts on The Blogs are contributed by third parties. The opinions, facts and any media content in them are presented solely by the authors, and neither The Times of Israel nor its partners assume any responsibility for them. Please contact us in case of abuse. In case of abuse,
Report this post.

Almost a year ago, I received an urgent phone call from a woman (let’s call her Dina), who told me that the chief rabbinate’s office had just telephoned her here in Israel.  They wanted more proof of Jewishness. She had already sent out invitations for her wedding, but now they wanted proof that she was Jewish.

Of course, I had proof of her Jewishness because I had served as a rabbi in Portland, Maine, where Dina’s grandmother lived.  More than five years ago, I wrote a letter for Dina certifying that she was Jewish so she could make aliyah. Before doing so, I investigated her grandmother’s ketuba, and saw that it was in accordance with Orthodox law. I checked her birth certificate and her mother’s.  I checked on other aspects of her upbringing as well, and I had her documents on file and her life story for four generation in my hand.

I tried to call the chief rabbinate’s office but received no answer.  Dina asked them to speak with me, but they refused. Only some time later did I find out that they were refusing communication with me because I was on their secret blacklist. They had blacklisted me because of my association with Yeshivat Chovevei Torah, the forward-thinking Orthodox yeshiva started by the great Rav Avi Weiss and now directed by the brilliant Rav Dov Linzer.  These two rabbis are two of the great luminaries of our generation, so it was heartening to learn that the chief rabbinate had decided to disqualify me because of my association with them instead of looking at one of my many character flaws.

But it was very frustrating for me to try to help this woman Dina in the face of this imposing and opaque power structure of the chief rabbinate’s office that denied her the right to marry, simply because they didn’t recognize my authority.  I am still in shock and saddened when I recall how she described how rude the call was from the office investigating her Jewishness. I can’t imagine how anyone can so callously telephone a Jewish woman planning a wedding in Israel and simply tell her she’s not certified Jewish and her wedding isn’t certified kosher either.  And then he hung up the phone without instructions on what to do. The State marriage bureaucracy was not interested in helping Dina or in talking to me. The State just tossed its citizen into a swamp of confusion and despair, right before her wedding. I guess it is only because they do this cruel act so frequently that they can do it so blithely.

That happened about a year ago.  Thank God, Dina was eventually able to marry in Israel, and even did so under the authority of the rabbinate.  The organization ITIM helped her by facilitating a channel to a Jewish court in Massachusetts so that they could write a letter certifying that she was Jewish.  They didn’t know her story as well as I did, but they did know the clerks in the rabbinate office, which was all that really mattered. Dina had asked me to officiate at the wedding, but after the rabbinate blacklisted me the couple used a clergyman authorized by the State of Israel. Everything worked out for her and only I was hurt in the end, as I was dropped from the process of officiating her wedding.  This was humiliating, but it was only my personal injury so I didn’t write anything about it then.

Since then I have learned more about weddings in Israel and about the blacklists of the chief rabbinate’s office. It’s not just me, one rabbi, on the blacklist.  There are hundreds of thousands of Israeli citizens who are denied marriage rights in the State of Israel! Hundreds of thousands of Israeli citizens are denied the right to marry in their country, either because the State clergymen here don’t see these citizens as Jews or for some other reason.  The State doesn’t allow their marriage ceremonies to take place in Israel, but in a convoluted way they officially sanction them as married if they go overseas to get married.

How could this be?  If another country in the world blocked Jews from getting married in the country and made them fly overseas for a wedding, we would be in an uproar.  But here it happens in Israel on a daily basis and the State apparatus through the arm of the State clergy humiliates people and crushes their dreams on a daily basis without even a thought for the distress and great injury that they cause to so many people in Israel.

As I’ve learned more about the hurt being suffered by Israeli citizens, I’ve become involved with two organizations looking to change the monopolistic control of the rabbinate over Jewish weddings in Israel.

Tani Frank and Elad Leubitz at Ne’emanei Torah Va’Avoda are promoting a legislative proposal that will expand the options for civil weddings in Israel.  Currently, no options exist. Even as I write that, it is hard for me to believe it or conceive it. If you want to marry in Israel, you need to go to an official religious institution and marry through them. Thousands of Israelis have traveled to Cyprus or Prague to get married, and then they return to Israel as officially married.  This is a solution but not a good one. The real answer is to end monopolistic control over marriage in the hands of the rabbinate, and allow for laws for civil unions.

Another organization working on breaking the rabbinate’s monopoly over marriage is “Chuppot.”  Rav Aaron Leibowitz founded this organization dedicated to expanding marriage options outside of the monopoly because he believes that Israeli citizens need an Orthodox option for marriage, and also divorce, outside of the entrenched positions of the official rabbinate.  There are many cases, just like the one I described above, of Jews in Israel who want to get married, but the chief rabbinate office denies them their rights until they are recognized by the bureaucracy of the State rabbis. Rav Leibowitz is setting up couples with Orthodox rabbis who are willing to defy the rabbinate monopoly and assist with weddings outside of the power structure.

There is currently a law in Israel that says that a rabbi who officiates at a wedding in Israel but is not an official Clergyman may be subject to imprisonment for up to two years. Rav Leibowitz says he is willing to risk the jail sentence. I told Rav Leibowitz to sign me up as a rabbinic supporter and that I also would officiate at a wedding of Jews in Israel who don’t wish to marry through the chief rabbinate office.  I don’t wish to break a law of the State even a bad and harmful law, so I am hopeful that this law authorizing prison time for non-State rabbis is abolished soon. In the past, to my regret I have had to say No to people, former congregants and others, who have asked me to help them to get married in Israel. Now I am ready to say “Yes”; yes, I am willing to officiate at religious weddings in Israel if it is not under the State power structure.

I have been a rabbi for more than a decade.  When I first started, I arrived in Maine and an old woman, a holocaust survivor, told me, “You are a shaliach, you have been sent here.”  She needed my help, mostly as a listener or for small things like bringing her a challa or grape juice for Shabbat. I cared for her as much as I could, but really I saw that there was one woman who was very diligent in caring for this elderly Holocaust survivor, by bringing her food for Shabbat and constantly checking on her.  That woman was Dina’s grandmother. She is still alive and I see her as a holy woman for the work that she has done on behalf of others. When Dina’s grandmother told me that her granddaughter wanted to move to Israel, I wrote the letter certifying her granddaughter’s Jewishness, so that she could be a part of the Jewish people in our country.  I knew her Jewish story. I knew that behind her life were generations of Jews who cared for one another through many hardships in different countries around the world.

The State Clergy in Israel, the office of the chief rabbinate, didn’t care about her story or my story.  Instead, they care more about preserving their power structure and their monopoly over marriage laws.

It’s time to end their monopoly.  We need to do this now for the sake of our generation and for the honor of generations past and future.

About the Author
Rabbi Akiva Herzfeld is all for Torah all the time, except when he is hiking or getting lost in space travel. He once lived among Maineiacs, serving as the rabbi of Shaarey Tphiloh in Portland, Maine and prior to that was a prominent Orthodox author of wisdom literature at Harvard Hillel. In 2014 he made aliyah. He now lives in Modiin with his wife Michal and their five rambunctious children.
Comments