The Blogs
Josh Hasten
Apply for a Blog
Please note that the posts on The Blogs are contributed by third parties. The opinions, facts and any media content in them are presented solely by the authors, and neither The Times of Israel nor its partners assume any responsibility for them. Please contact us in case of abuse. In case of abuse,
Report this post.

As the High Court of Justice imposed demolition date nears for 15 houses and two other structures in the Netiv Ha’avot neighborhood of Elazar in Gush Etzion, residents and supporters are mobilizing to do what they can to prevent another group of Jews in Israel from losing their homes. 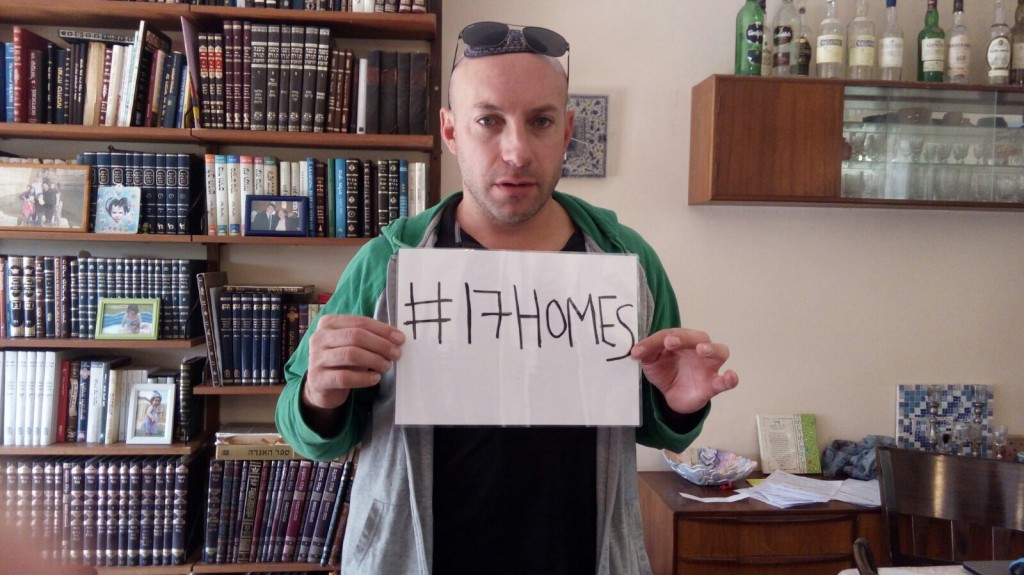 A social media campaign has been launched (see #17homes), and this Friday morning the community is hosting an open house for Israelis to have the opportunity to come and meet these loyal citizens for themselves and to learn about their predicament while getting a glimpse of this beautiful neighborhood and life they built starting back in 2001, with government support.

But why were these homes put on the chopping block in the first place?

According to the extremist organizations who filed the petitions with the court demanding to have the homes torn down, the houses were constructed on private Arab land.  But in reality only small strips of the homes, in some cases mere meters, lay on questionable land. This plus the fact that no Arab landowner has proven ownership of any of these areas in court.

But despite the court siding with the radical groups, at the end of the day the case of Netiv Ha’avot isn’t about upholding the law, or protecting the rights of Arab landowners. Tragically this is a case of baseless hatred by certain Jews against religious Zionists or the ‘settlers,’ plain and simple.

And we’ve seen this before.

In 2005, the government backed by Israeli elitists and the media sold the Gush Katif Disengagement plan to the public by claiming Israel would benefit diplomatically and in terms of security if it were to throw nearly 10,000 Israelis out of Gaza while exhuming the bodies of the dead for reburial in ‘Israel proper.’

As Jerusalem Post Columnist Caroline Glick noted in a column on the 10th anniversary of the Gaza withdrawal (“Column One: The Irony of the Expulsion from Gaza,” July 23, 2015), neither of those benefits were reaped. Israel didn’t win any brownie points diplomatically, while rocket fire from Gaza increased by 500%.  Tack on a Hamas take-over and three IDF military operations in Gaza to boot.

The true reason for the withdrawal Glick explains was for the extremists “to deal a strategic blow to Zionism and the Jewish character of the state.” In other words, this was an instance of baseless hatred against ‘religious Zionists’ and ‘settlers.”

For some of those who rejoiced over the Gaza expulsion, it didn’t matter to them that years later the rockets and missiles would reach Israel’s populous coastal plain and its international airport. In their view personally running from rockets was a small price to pay for their victory in ruining the way of life of the Gaza ‘settlers.’

This sad fact can be illustrated by an appeal filed in the High Court at the end of last month by six of the fifteen Netiv Ha’avot families begging that their homes be spared, even offering to shave off any part of their homes, which were deemed ‘illegal.’

It would seem like a no-brainer for the court to accept the petition from a legal perspective as the families who were willing to tear apart rooms in their homes would now have been in full compliance.  However the court refused to even consider the petition and maintained that the entire structures must come down.  The fanatics at Peace Now celebrated the decision.

Ironic in all of this is the fact Government of the State of Israel provided the residents of Netiv Ha’avot with 300,000NIS in infrastructure including water, electricity, and sewage to build the neighborhood sixteen years ago with the plan of retroactively legalizing the entire neighborhood.

It may or may not be too late to save the 15 Netiv Ha’avot homes (along with two other structures), from the wrecking ball. But it’s important to understand the painful truth – baseless hatred might soon cause more Jewish families in Israel to become homeless.

About the Author
Joshua Hasten is the International Spokesperson for Gush Etzion. He is host of the weekly “Israel Uncensored” radio broadcast on The Land of Israel Network, as well as an international Middle East Correspondent in print and on television. Joshua is also a sought-after speaker around the world. His workshops and lectures on pro-Israel advocacy have impacted thousands. Joshua was the CAMERA organization’s 2009 Letter Writer of the Year, and is a member of the Judea and Samaria Speaker’s Bureau. Originally from Indianapolis, Indiana, he resides in Gush Etzion, Israel.
Comments