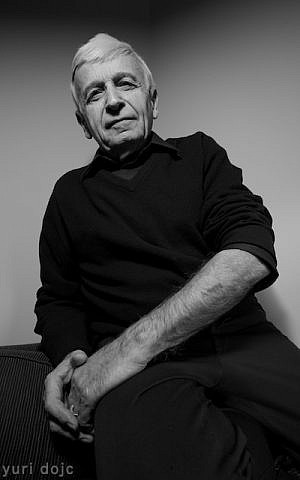 There’s a special art in writing an obituary. I don’t have the recognized skills to perform the task. However, I would like to write a few words about Max Tibor Eisen, author, public speaker, Holocaust survivor and educator. You see, he died this past Thursday, July 7, 2022, in Toronto, Canada.

Born in 1929, Max Tibor Eisen, was the son of the late Zoltan and Ethel Eisen of Moldova, Czechoslovakia, in the Slovakian part, near the Hungarian border.

He had one sister and two brothers.

He once told me that at the insistence of the Nazis and their collaborators, his home address included the concentration death camps of Auschwitz in Poland, and Mauthausen, Melk, and Ebensee in Austria. He also spent time in the Hungarian ghetto of Kassa, (Košice). Both his parents and all his three siblings were murdered during the War. He was the only survivor of his immediate family.

Over coffee, he said his family lived on the outskirts of town, close to the railroad station. His grandfather had a lumberyard and his father had a distillery, where people used to come and drink.

No more than ten per cent of the population of Moldavia were Jewish. His family was orthodox and his mother wore a sheitel.

As a youngster, Max had three dogs, a big German shepherd, named Farkas, the Hungarian name for Wolf, and two fox terriers, their names were Prince and Ally.

Max told me his town, Moldavia, had a beautiful Jewish community. In all, ninety Jewish families were living there. There were two Jewish doctors in town and the fire chief was also a Jew. Many war veterans from the First World War lived in Moldavia. At home, he spoke Hungarian. In addition, he also spoke some Slovak.

At twenty years of age, after suffering through the most extreme horror conditions imaginable, he arrived in Canada in 1949 after spending time at a displaced persons camp in Ebersberg, Germany.

Reflecting on his life as a Holocaust teenager in the concentration camps he said, “Human nature has its dark side; we can never be complacent.” He added, “My story is a clarion call for the youth of today to be vigilant and be each other’s keeper. For freedom cannot be taken for granted. Rights and liberties can quickly vanish in a hateful society.”

Max believed, “human behaviour is such that we can rise to great heights, but also sink to great depths of evil.”

“For me,” he said, “as a ten-year-old Jewish boy living in my native land, and six years later having survived living in the concentration death camps, my life has given me the ability to know all too well how a normal society can be transformed into a culture where mass murder is tolerated.”

Nine years ago, at the age of 83, as a Holocaust survivor, he admitted to me that he was still sensitive to verbal attacks and diatribes. He said, “The lie repeated enough times can de facto become what people perceive as truth. For the events of the Holocaust, of all genocides, are extremely significant in our history and they teach us lessons that must be carried forward to future generations.”

For over thirty years, Max carried his message to the youth of today through his speeches at Toronto’s The Neuberger Holocaust Education Centre. He also visited countless schools and universities in North America, applying his skills as a communicator of Holocaust history which he had experienced as a young boy. Many of the students readily identified with him, for at the time they were the same age as Max had been in the concentration camps.

In 2017, HarperCollins published his book, By Chance Alone: A Remarkable True Story of Courage and Survival at Auschwitz. The book was the winner of CBC Canada Reads and a finalist for the RBC Taylor Prize.

In 2021, Max Tibor Eisen was appointed to the Order of Canada “for his contributions to Holocaust education, and for his promotion of transformational dialogue on human rights, tolerance and respect. The Order of Canada is one of the highest civilian honors.”

To quote Elie Wiesel, “There is divine beauty in learning, just as there is human beauty in tolerance.”

About the Author
Simons is an author, writer and social advocate. He publishes an online international news service, now in its 15th year, dealing with issues relating to intolerance, hate, antisemitism, Islamophobia, conflict, and terrorism, as well as an online community news site. As a diplomat, he served as the Honorary Consul of the Republic of Rwanda to Canada, post-genocide era. He has lectured and designed courses in the areas of therapeutic management, religion in politics, and communications. He recently published his fifth book.
Related Topics
Related Posts