At the beginning of the 20th century, anti-Semitism was pandemic and Jews found themselves persecuted and unwanted everywhere. In Europe the ruling classes incited the mobs against the Jews to provide a scapegoat for the misery of the masses, and discrimination and pogroms against Jews were rampant. In the Arab world, from North Africa to the Middle East, the Jews suffered for centuries the chronic condition of “dhimmis”, a status of legal, social and psychological submission to the Muslim majority accompanied by bursts of physical violence. On top of this, the surge of nationalism in Eastern Europe and the Arab countries found the Jews as an easy target for scapegoating, rioting and pogroms.

Life was extremely difficult for the Zionists: they came to the Land of Israel to become farmers, but swamps were usually the only places available for them. Diseases like malaria became common.  They were poor and their previous experience in agricultural work was nil. They came up with an original solution: a system of collective socialist communes (“kibbutzim”) was founded to survive and support each other. The first kibbutz, Degania, near the Sea of Galilee, was founded in 1910 by a group of ten men and two women. 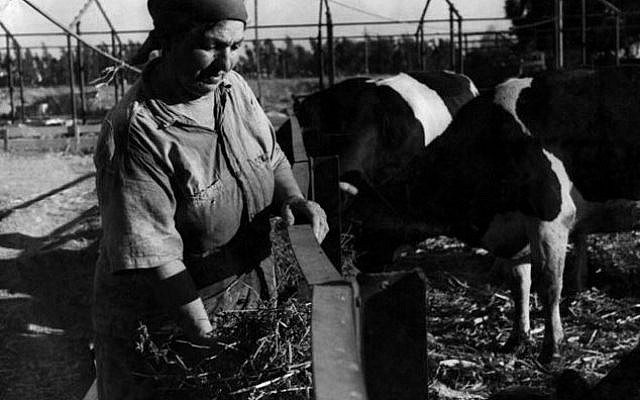 Miriam Baratz tending cows at kibbutz Degania. Miriam was 21 when she joined a dozen men and women to found the kibbutz in 1910.(Photo from Wikimedia Commons)

Other Zionists were more inclined towards a bourgeois lifestyle: On April 1909 several dozen families gathered on sand dunes next to the Mediterranean Sea and declared the foundation of a new neighborhood, which became with time the city of Tel-Aviv. 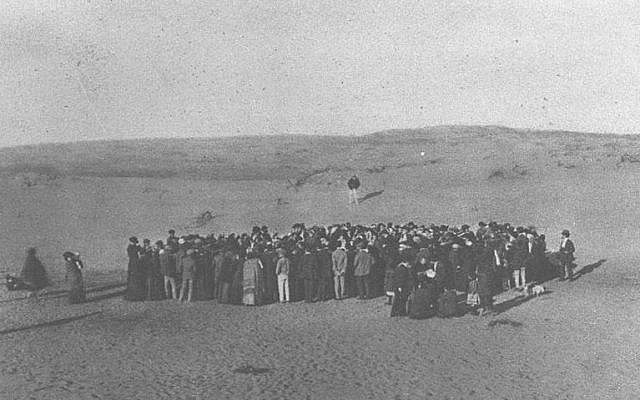 The founding of Tel-Aviv in 1909 (Photo from Wikimedia Commons)

In 1936, a mere 27 years after the founding of Tel-Aviv, the Israeli Philharmonic was born, giving its debut concert in Tel-Aviv under the direction of the legendary maestro Arturo Toscanini. Many of its musicians had just barely escaped the nightmare of Nazi Europe. The inaugural concert took place in an improvised under-construction “concert-hall”. 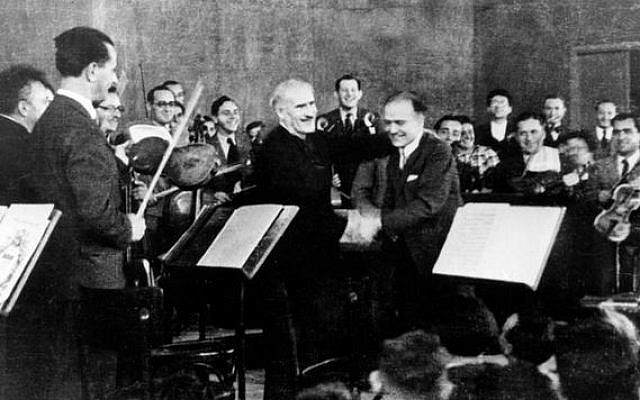 The Zionists were a small bunch of idealistic people in pursue of a dream.

Their dreams would not have become true if the worst of their nightmares would not had become a reality: the rise of Nazism – with hundreds of thousands of desperate Jews fleeing Europe – and the ethnic cleansing of the Jews in the Arab countries – with another half million Jews arriving to Israel from Northern Africa and the Middle East [1]. America did its part, by closing its gates to immigration when the Jews most needed it.

Israel was born as a nation of refugees, who came to its shores because they had nowhere else to go. They came with nothing, except for their bare hands and traumatized minds.

[1] Note about the ethnic cleansing of the Jews from the Arab countries:

Just to indicate a few modern events prior to the establishment of the State of Israel: In June 1-2 1941, a pogrom in Baghdad, Iraq, ended up with over 180 Jews killed and around thousand Jewish homes destroyed. In November 5-7 1945, a pogrom started in Tripoli, Libya, and quickly spread to neighboring cities: at least 130 Jews were killed and hundreds of Jewish homes were pillaged or destroyed, including nine synagogues. In December 1947, in Aleppo, Syria, anti-Jewish riots resulted in some 75 Jews murdered and several hundred wounded. Ten synagogues were destroyed. The Jewish community in Aleppo had lived there for more than 2,000 years and predated the Arab conquest by more than seven centuries.

For more details about the ethnic cleansing of Jews from the Arab countries see, for example, Lyn Julius’ book:

About the Author
Jaime Kardontchik has a PhD in Physics from the Technion, Israel Institute of Technology. He lives in the Silicon Valley, California.
Comments