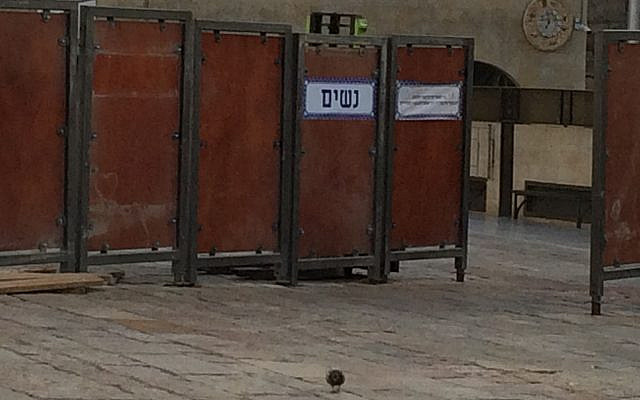 Haaretz reports that the narrow passageway on Mount Meron, which was the death trap for 45 men and boys on Lag Ba’omer, was built illegally in order to provide men a  male-only route in and out of the site (Chaim Levinson, “Deadly Meron Route Built Illegally to Segregate Genders,” Haaretz, May 7, 2021).

Misogyny kills. This time, it killed men and boys. It kills women and girls every day of the week in “domestic” violence, rape, so-called “honor” killings, and infanticide of newborn girls.

What happened at Meron is nothing out of the ordinary, and I am referring not to the disaster on Lag Ba’Omer, but to turning “national holy sites”– their legal designation– de facto, into haredi shrines. With the obsessive misogyny, the anathematizing of women, that goes along with that.

The Kotel has no less been turned into a haredi shrine than has Meron, through no national process; through no process whatever. Just creeping annexation of that site and turning it into a sectoral shrine. At the Kotel too, the haredi authorities have created a male only passage, behind the women’s section– itself an act of creeping haredi annexation, authorized through no public process– and which is now enclosed by a high stone wall at its rear, so the men using the male-only ramp to the men’s section don’t have to even see, never mind, actually encounter, women. Because you know, women pollute. And this is about men and their putative needs. And about political abdication.

I have written an article about all this, which will be published later this week. It is about the creeping denial of women’s human rights in a state in which haredi power is out of control, and the government, in all its ministries, betrays its responsibility to the country and to the country’s founding document, Israel’s Declaration of Independence, which states that citizens will have full and equal rights with no respect to religion, ethnicity, or gender. Because partisan, political interests, and the interests of one party head, in particular, take precedence over all else.

The mass gathering at Meron should never have been allowed to happen– because of corona. The many young boys traditionally taken to this event were not vaccinated, even if adults may have been– but who knows even that, since there was no thought even of checking for the “green passport” that is proof of vaccination– the only point of which, of course, would been to turn all non-vaccinated people, including children, away. But this government, and those preceeding it for decades, abandon rational policy when it comes to the haredi sector, as we saw throughout the year of corona, before we had vaccines, when haredi study halls (batei midrash), and schools remained open in blatant defiance of public health directives the rest of society were to follow, and mass weddings, funerals, and other celebrations proceeded as usual. Netanyahu put the whole country into quarantine because he would not order selective quarantines, based on, you know, statistics about locations with outbreaks, because of his political considerations.

Will something be done to make kever rashbi– the site at Meron– conform to its status as a national holy site, open to all equally– and complying with professional, universal, safety standards?

Don’t bet on the former, certainly. But not even on the latter.

Instead, we will continue to hear the pathetic blame game and evasion of elemental common sense, never mind, responsibility, from all who bear actual responsibility for what happened in Meron on Lag Ba’Omer.

Which are the people at the very top.  Not the police; nor the emergency services, nor the hospitals. The attempt to blame them is beyond outrageous. Luckily,  both, unlike women, have unions to protect them from such slander.

Maybe if we get an actually functioning, rational government, whose eye is on– governing– as opposed to protecting an indicted Prime Minister and his interests, we might get some rational attention at least to some of this.

Left to his devices, Lapid would certainly do that; he tried when he was in government briefly in 2013, until Netanyahu brought that government down with ludicrous charges that Lapid was planning a coup.

But Lapid will have Bennet, who wants to entice some haredi party– the only possible one is Moshe Gafni’s United Torah Judaism– into the coalition– after it passes draft legislation for haredim, on which the haredi parties will not have to vote. Gafni, however, of all the haredi party heads, from the Lithuanian haredi variant, might actually be willing to support safety regulations being enforced at national holy sites– this list includes the Kotel, Rachels’ Tomb, the Tomb of the Matriarchs and Patriarchs, and Meron– if surely, not the State reclaiming them altogether and making them places where there is no tolerance for treating women as polluters.

But Gafni is no friend of the sects/ clans that have laid claim to Meron (a stance he shares with quite a few other groups). He himself does not participate in the Lag Ba’Omer event there and, in an interview a few days ago, quite vehemently called for basic safety regulations there– which just happens also to mean taking the site out of the control of those who now run it– and who benefit from its massively lucrative operation– and putting it– in whose hands, exactly?

The leading haredi authority, Rabbi Chaim Kanyevsky, rabbinical head of the Degel Hatorah party, issued yet another of his woeful statements this past week, blaming the Meron disaster on women’s lack of modesty, etc., etc. Others who consider his pronouncements binding issued similar statements. 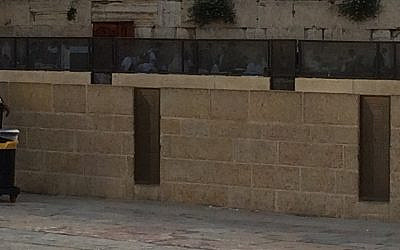 Stone wall enclosure of the women’s section at the Kotel. 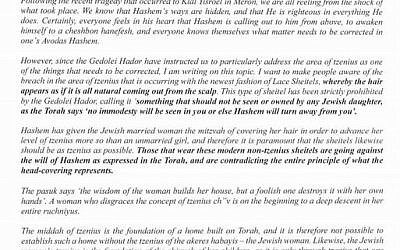 Text of a document citing R’ Kanievsky’s association of the Meron disaster with women’s hair covering. 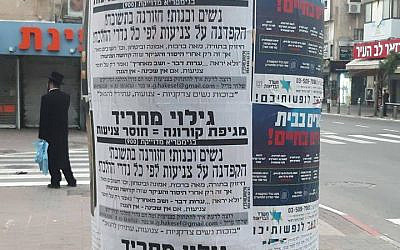 Pashkevilim blaming women for corona.
About the Author
Shulamit S. Magnus is a professor of Jewish history, author of four books and numerous articles on Jewish modernity and the history of Jewish women, and winner of a National Jewish Book award and other prizes. Her opinions have been published in the Forward, Tablet, EJewish Philanthropy, Moment, and the Jerusalem Post.
Related Topics
Related Posts
Comments