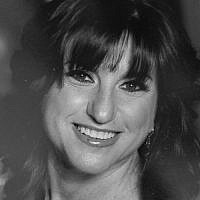 The Blogs
Helene Rothenberg
Apply for a Blog
Advertisement
Please note that the posts on The Blogs are contributed by third parties. The opinions, facts and any media content in them are presented solely by the authors, and neither The Times of Israel nor its partners assume any responsibility for them. Please contact us in case of abuse. In case of abuse,
Report this post.

Many of us in the Jewish world have attended our fair share of gala dinners, and it’s not uncom-mon to feel fatigued just from the mere thought of them.

All too often, these lengthy events are platforms for generic platitudes about the host organization through a seemingly unending lineup of presenters, including a keynote speaker with only a loose connection to the cause. We twiddle our thumbs, pick at our food, and constantly check our smartphones, waiting patiently (or impatiently) for the inspiration that got us in the door to begin with.

But this year’s Friends of Jerusalem College of Technology (JCT) gala in New York will be about much more than pomp and circumstance, and the keynote speaker won’t represent a publicity stunt whose sole purpose is to elevate the organization’s profile. Refreshingly, the “JCT – Sparking In-novation” event on May 6 will feature an organization and honoree who are completely in sync. The life story of our keynote speaker, actress Mayim Bialik, is a true manifestation of JCT’s crucial mission to provide Israel’s religious community with high-quality education in science and tech-nology.

Bialik plays neurobiologist Amy Farrah Fowler on the “Big Bang Theory” and is herself a neuro-scientist, all while maintaining a Jewish lifestyle. JCT, meanwhile, trains 20 percent of Israel’s women engineers. One out of every five Israeli women studying computers does so at JCT, and all of those students are daati leumi (national religious) or haredi. Fifty-three percent of our computer science students are women—18 percent higher than any other Israeli institution of higher learning.

Enabling women to pursue technology careers is a key step in women’s empowerment. According to the 2017 Harvey Nash Women in Technology report, just 26 percent of women become interest-ed in technology in high school or earlier, compared to 44 percent of men. Additionally, men (59 percent) are significantly more likely than women (44 percent) to enter the information technology field through a STEM (science, technology, engineering and math) academic track in college. Six-ty-nine percent of the survey’s respondents, including both men and women, said the key to getting more women to pursue careers in technology is encouraging women to study technology in high school or college—affirming JCT’s work in this arena.

In Israel, empowering religious women with science and technology education adds an important layer to this mission. Increased women’s employment in fields such as computers bucks the stereo-type that the haredi community lags in its contribution to Israel’s workforce. It is also a vital recog-nition of the Jewish state’s demographic reality. The country’s haredi fertility rate is 6.9 children per woman, compared to 2.4 per non-haredi woman, according to the Israeli Central Bureau of Sta-tistics. The haredi community, which currently makes up 9 percent of Israel’s total population, is projected to comprise 16 percent of the population by 2030 and about one-third by 2065. This means that the importance of training and employing religious Israeli women in science and tech-nology professions will continue to rise.

On the television screen, Mayim Bialik counters the myth that women are not as well-suited as men for science and technology careers. She does the same in real life, with the added bonus of illustrat-ing how religious women can thrive in science, Hollywood, or any path they choose. She is also a leading voice on women’s issues. Just like JCT, her hallmark is debunking stereotypes and shatter-ing glass ceilings.

Bialik’s honor at the JCT gala comes at a momentous and fitting time for the institution. The col-lege was recently awarded land in Emek Zion to build permanent facilities for the Tal Campus for women, which offers female students a unique combination of science and engineering education on the highest level and advanced Judaic studies courses. The new home of the Tal Campus will ensure that JCT produces a new generation of Mayim Bialiks—countless religious women who embrace science and technology careers, shattering gender stereotypes in the process.

JCT and Bialik are a match made in heaven. They serve as role models for Jewish women and all women, proving that women must not be limited by public perceptions, social norms, or statistical trends on their career choices and overall roles in society. This year’s Friends of JCT gala is not another cliché event. It is a moment of inspiration that should encourage women, religious and oth-erwise, to think outside the box and dream big about their future.

About the Author
Helene Rothenberg splits her time between Woodmere, New York and Caesarea, Israel. She is married to Robbie Rothenberg, the mother of three daughters, and is a real estate attorney at the law firm of Maidebaum & Sternberg, LLP in Cedarhurst, NY. She is also the chair of the Jerusalem College of Technology's "Sparking Innovation” gala dinner on May 6, 2018, in New York City.
Comments