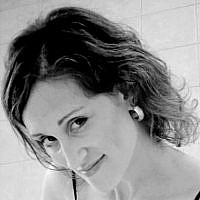 The Blogs
Yael Tamar
Apply for a Blog
Advertisement
Please note that the posts on The Blogs are contributed by third parties. The opinions, facts and any media content in them are presented solely by the authors, and neither The Times of Israel nor its partners assume any responsibility for them. Please contact us in case of abuse. In case of abuse,
Report this post.

I recently had a chance to interview my favorite TV actor Mayim Bialik. I was eager to speak with her ever since she has published her vegan cookbook Mayim’s Vegan Table, featuring simple and easy-to-do vegan re 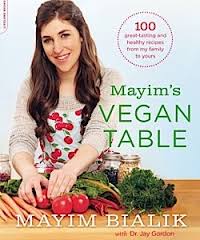 cipes of delicious foods for anyone wishing to move toward a healthier plant-based diet.

Besides being an Emmy-nominated actor, Mayim has a Ph.D. in neuroscience, which corresponds to the career pursuits of her current TV character, Amy Farrah Fowler, on the Big Bang Theory. She has two boys, aged 9 and 6.

Yael
: I really love your new book I can’t stop raving about it. I need to know what is your favorite recipe in the book.

There is also the Hamentashen and the strudel. I also really like the chili, which is one of my stand-by recipes, as well as the vegan Shepherd’s Pie, which is something I make all the time for my kids. It is so hard to pick! I love the baked Ziti: it’s the one thing I always make if I have a lot of people coming over. Clearly, I have a lot of favorites!

Yael: When do you normally have a lot of people over? Is it on Shabbat and the holidays?

Mayim: Yes. If I host people, it would be on Shabbat. My ex had to do Pesach last year though. I had a significant injury to my hand, and so, unfortunately, my cooking and hosting are not what they once were. But yes, it’s usually for holidays, Shabbat or birthdays. My ex and I cook everything ourselves for our sons’ birthday parties, and so those are the times when we prepare more elaborate dishes.

Yael: Did being Jewish and observant influence your recipe choices?

Mayim: Yeah, the idea of the book came from my work with the Jewish website Kveller as I would talk about the vegan versions of popular Jewish food recipes. Obviously, the cookbook covers a lot more, but I think the notion of making food special is a very Jewish notion. The notion of appreciating rich food is also Jewish, but it does not always equal healthy. So I guess I intended to raise my voice with thought and appreciation for Jewish food, but also for eating in a certain way.

Yael: So the Jewish tradition made you interested in cooking?

The Jewish calendar allows for a lot of festive meals. I often hear religious women say that what many people stress about on Thanksgiving once a year, in traditional communities Jewish women do every Shabbat. So definitely, having been raised Jewish and Eastern European with a traditional kind of home  where cooking was very important and emphasized was a big factor in my interest in food and cooking.

Yael: What do you place in your Passover plate instead of the lamb leg?

Mayim: (Laughing). Rabbis in the Gemara commented that if people could not afford meat, they could replace the shankbone with beets. And some replace egg with mushrooms. I hate mushrooms, and so I get to improvise.

And here is one of Mayim’s favorite recipes just in time for Hanukkah from her highly recommended new book Mayim’s Vegan Table!

The donuts are best enjoyed the day they are made. Make sure to drain well before serving.

1. Combine the yeast, sugar, and 1 cup of warm soy, rice or almond milk in a small bowl and let stand until foamy, about 8 minutes.

2. In a large bowl, whisk together the flour and salt. Add the yeast mixture, egg replacer, and margarine and beat until the dough is soft but not sticky for about 3 minutes.

3. On a lightly floured surface, knead the dough until smooth and elastic, for about 3 to 4 minutes. Transfer to a medium bowl coated with non-stick cooking spray and cover loosely with plastic wrap. Let rise in a draft-free place until doubled in size, about 1 1/2 hours.

4. Punch the dough down. On a lightly floured surface, knead the dough a few times and roll out to 1/4-inch thickness. Cover with a clean dish towel and let sit for 5 minutes.

5. Cut out rounds with a 2-inch (5-centimeter) cookie cutter (Yael’s note: I use a drinking glass) and transfer to a lightly floured baking sheet. Reroll the scraps and cut out the remaining dough. Cover the rounds with the towel and let rise in a warm, draft-free place for 20 minutes.

6. Heat the vegetable oil to 375 degrees Fahrenheit (190 degrees Celcius) in a large heavy-bottomed pot. Place a wire rack on top of the baking sheet or parchment paper and line with brown paper bags or paper towels. Fry each doughnut for about 1 minute on each side until golden and puff. Remove with a slotted spoon and place on the paper towel to cool. Fry in batches of four or five. Sprinkle with confectioners’ sugar.

Variation: You can create jam-filled doughnuts by spooning jam into a pastry bag. Pierce a hole in the side of a doughnut with a pastry tip and squeeze in the jam to fill until the doughnut feels heavy with jam.

About the Author
Yael Tamar is a Director of PR, Marketing and Communications for Alexander Muss High School in Israel, a non-profit which delivers a transformative experience for global teens through education in Israel. She is a mom to a 2-year-old, a cat and a dog. Yael has recently become vegan, has taught herself to cook and is now creating new kinds of natural food supplements as a hobby. She blogs on a variety of subjects, from health to technology . She lives in Tel Aviv.
Related Topics
Related Posts
Comments