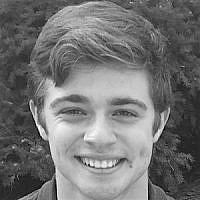 The Blogs
Ben Schulman
Apply for a Blog
Advertisement
Please note that the posts on The Blogs are contributed by third parties. The opinions, facts and any media content in them are presented solely by the authors, and neither The Times of Israel nor its partners assume any responsibility for them. Please contact us in case of abuse. In case of abuse,
Report this post.

He had invited an Islamist extremist who called the 9/11 attacks “sweet revenge” to Parliament. He regularly appeared on Press TV, Iran’s propaganda outlet. He stated that he was a “very good friend” of Ibrahim Hewitt, who compared homosexuality to pedophilia. He tweeted, “Thanks Hugo Chavez for showing that the poor matter and wealth can be shared. [Chavez] made massive contributions to Venezuela & a very wide world.” Although Jeremy Corbyn was elected to lead the Labour Party by an overwhelming margin, one could describe many of his associations and opinions as ‘troublesome at best.’

Extremist Islamists, Iranian propaganda channels, and the Chavez regime are a subpar set of friends, but those associations (somehow) did not define Corbyn. Anti-Semitism within the Labour Party, paired with Corbyn’s inability and unwillingness to address it, was a different story: the subject made headlines for weeks, all but fracturing the relationship between Labour and the Jewish community in the process. Few Jews can forget that Corbyn invited Hezbollah and Hamas to Parliament and called them “friends.” He only backtracked on the phrasing when the anti-Semitism scandal came to its peak, seven years after his initial remarks.

Corbyn also appeared to compare Israel to the Islamic State, though he later said that he regretted his word choice. After Ken Livingstone, the former Mayor of London, falsely and offensively claimed that Hitler “was supporting Zionism before he went mad and ended up killing six million Jews,” Corbyn’s Labour suspended him for a mere two years rather than banning him for life. This led the president of the Board of Deputies of British Jews to remark that “[Jewish-Labour relations] have reached a new all-time low,” while the Chief Rabbi of Britain argued that Labour had “failed to show that it is sufficiently serious about tackling the scourge of antisemitism.” 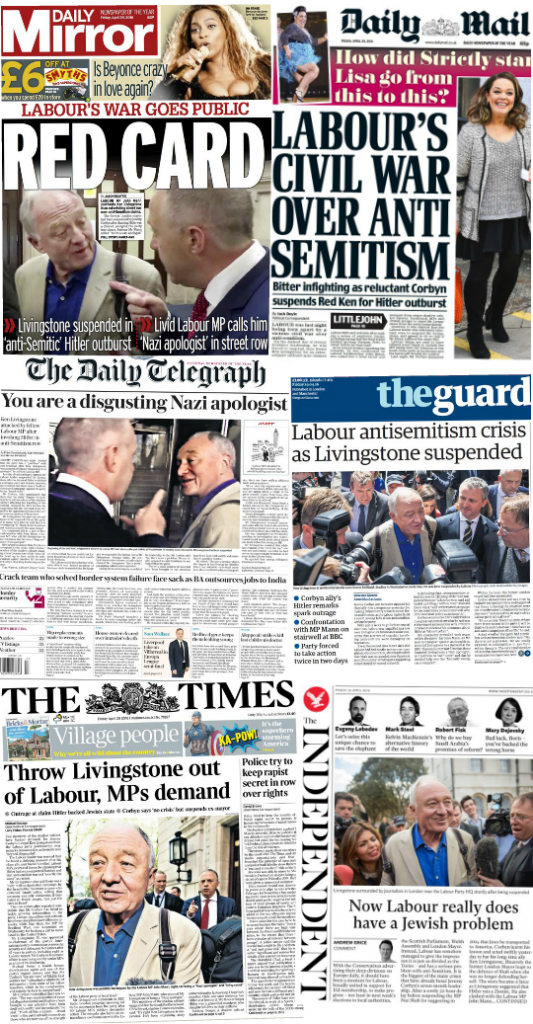 Newspaper covers from April 28th, 2016 show the extensive fallout of Ken Livingstone’s comments on Hitler and Zionism. On the bottom left, The Times has a quote from Corbyn stating that there is “no crisis” of anti-Semitism in Labour. On the bottom right, The Independent leads with a column titled, “Now Labour really does have a Jewish problem”.

For me personally, the final nail in the Corbyn-Labour coffin came from Jeremy Corbyn: The Outsider, a video made by Vice News. Roughly three minutes into their video, Corbyn is discussing how well-renowned political commentators do not understand what they’re talking about and create “baseless” debates. He receives a call from his head of strategy, and they discuss a piece by columnist Jonathan Freedland of The Guardian. Corbyn calls the piece “utterly disgusting, subliminal nastiness” and adds that Freedland is not a good writer who is obsessed with him. The exchange perfectly captures what Donald Trump would look like if he was a soft-spoken socialist, but the root issue was best summarized by Moment Magazine editor Liam Hoare: “It’s telling that Corbyn’s reaction to [Jonathan Freedland’s] article was swifter and harsher than his response to anti-Semitism within Labour itself.”

Even if I had wanted to believe in Labour’s vision, I could not forget how many times Corbyn had failed to understand Jewish concerns, contributed to our fears himself, and failed to correct course. I will never vote in the UK, but in terms of a ‘Jewish’ preference, I could not pull for a party led by Jeremy Corbyn. No less than 77 percent of British Jews shared this view. When it came to Jews, he just didn’t “get it.”

Relatively similar concerns were raised about Sadiq Khan during his campaign to be the next Mayor of London. The Daily Mail outlined his connections to Islamists and concluded as such: “Given some of the company he keeps, many voters may be wary of offering him [the mayorship].” Zac Goldsmith, the Conservative candidate for the mayoral spot, repeatedly attacked Khan on this issue as well. In the context of Corbyn’s relationships with radical Islamists and Holocaust deniers, it seemed a fair issue to examine. In the end, it turned out that some of his Islamist ‘associations’ were in his capacity as a civil liberties lawyer, while another ‘association’ with an Islamist was Khan’s attempt to kick out the radical imam out of his mosque. The reasons for which Jews might view Khan with caution had been mostly disproved and contextualized, but as mayor, his more difficult test would be to create a positive bond with the Jewish community.

Khan has passed this test with flying colors. In stark contrast to the dreadful attitude and approach to Jews demonstrated by Jeremy Corbyn, Sadiq Khan has repeatedly proven that he “gets it.” While Corbyn associated with Holocaust deniers, Khan attended a Holocaust memorial as his first mayoral action. While Corbyn criticized those who pointed out his relaxed approach to anti-Semitism, Khan said this:

While Corbyn paid homage to vocal anti-Semites, Khan penned an eloquent piece in the Jerusalem Post unequivocally stating his “zero-tolerance” policy for anti-Semitism. While Corbyn is due to let Ken Livingstone rejoin the party in a year, Khan immediately called for Livingstone to be expelled and assured the Jewish Chronicle, “Believe me, I won’t be another Ken Livingstone.” While Corbyn fans flooded Jewish journalists with anti-Semitic abuse and Corbyn gained the endorsement of a Neo-Nazi website, anti-Semites have actually accused Khan of being controlled by Jews (that sentence is entirely true). While Corbyn has said that Labour welcomes all types of people, Sadiq Khan has embodied that statement.

The latest contrast between Sadiq Khan and Jeremy Corbyn in dealing with an issue which the Jewish community cares deeply about occurred this week. For a bit of background, the EU has a strange Hezbollah policy. While Hezbollah itself states that the political and military wings of the terror group are “one and the same,” the EU (including the UK, as the decision was made in 2013) only banned support for their military wing. As a result, when the anti-Israel al-Quds Day March took place in London, Hezbollah flags expressed support for ‘only’ the political wing. 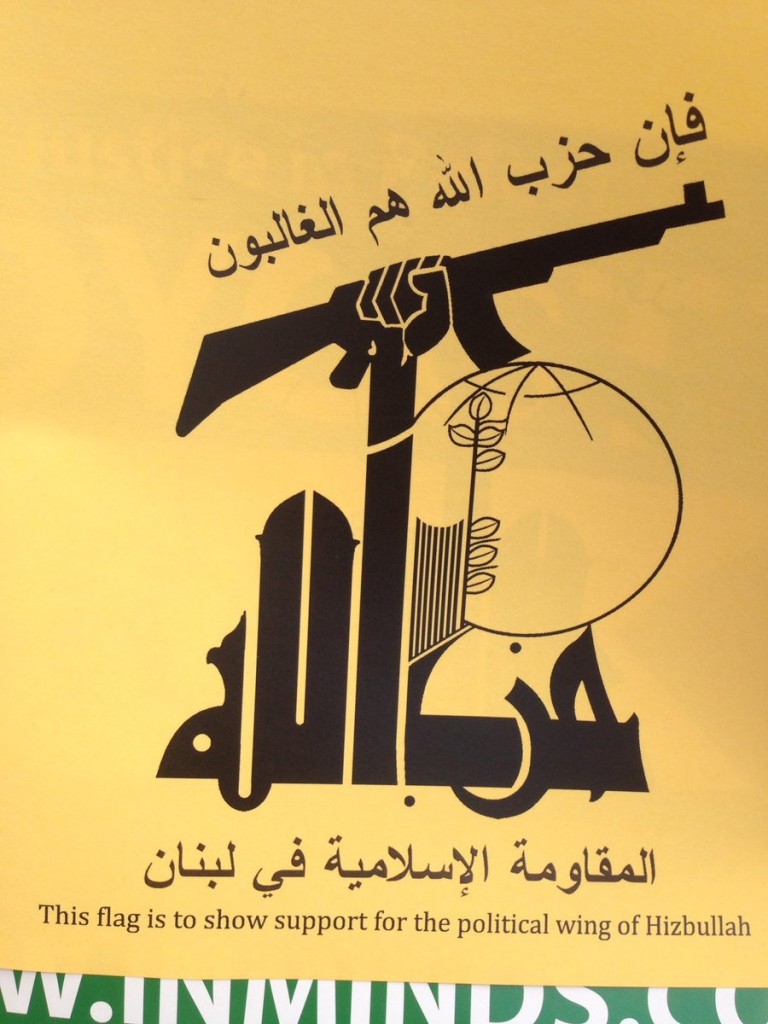 Khan expressed his concerns regarding the march beforehand, but he recently went further. In a move that is both praiseworthy and potentially risky for Khan, the mayor called for a full ban on support for Hezbollah, military and political. For Khan, there is a low chance that this stance benefits him, and a possibility that this decision hurts him: Muslim Londoners outnumber Jews eight-fold, and Muslims are a crucial electoral demographic for Labour (that being said, one cannot and should not assume that a large proportion of British Muslims supports Hezbollah). Most Labour members clearly do not care about Corbyn’s relationships with anti-Semites, but many care deeply about any error made by Israel. The likelihood of Jewish votes shifting Parliament back to Labour, or singlehandedly reelecting Khan, is miniscule. Khan undoubtedly understands all of these dynamics, but made the right choice anyway. 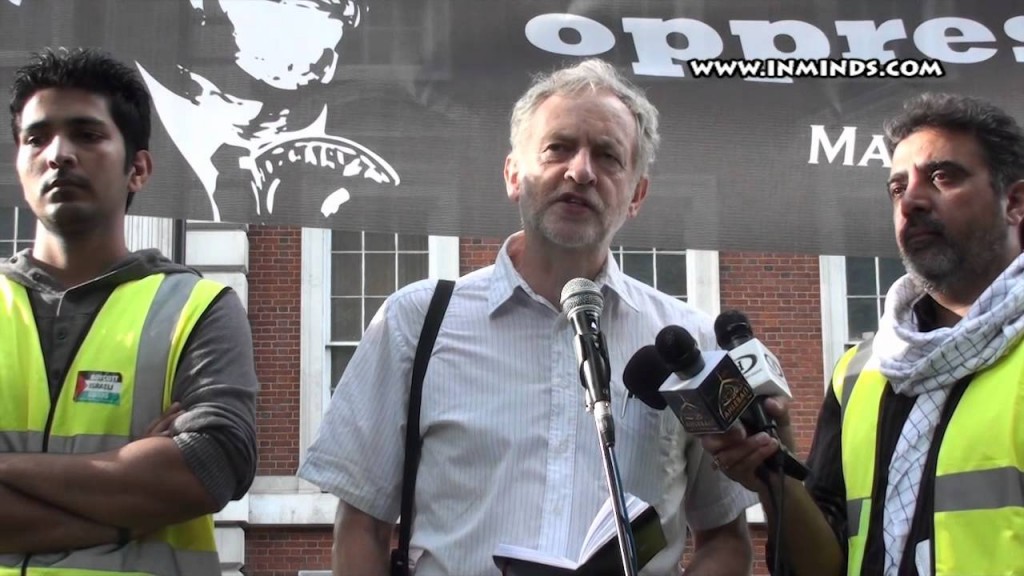 While the final decision on a blanket Hezbollah-support ban rests with Home Secretary Amber Rudd, there can be no doubt: the first Muslim mayor of London has taken yet another strong stand against Jew-hatred. And Corbyn? Don’t expect him to take the same stance: besides the comment about his ‘friends’ at Hezbollah, he spoke at the al-Quds Day March in 2012, apparently unbothered by the prevalence of flags expressing support for genocidal terrorist organizations.

We cannot know if Sadiq Khan truly cares for Jews, but if he does not, he has a strange way of showing it. Likewise, while Corbyn is not an outright anti-Semite, few can perceive his behavior as philo-Semitic. Whether or not their behavior accurately represents their true feelings, Labour has a serious Jewish problem, and Corbyn will not fix it. The party mantra has become Jez We Can, but if Labour is going to be the party for all that Corbyn claims it is, it must replace his approach to anti-Semitism with one that values Britain’s Jewish community: Yes We Khan.

About the Author
Ben is a junior majoring in political science and economics at Washington University in St. Louis. The Arab Spring sparked a lifelong interest in geopolitics and anti-Semitism, which are the topics most frequently discussed in his pieces.
Related Topics
Related Posts
Comments