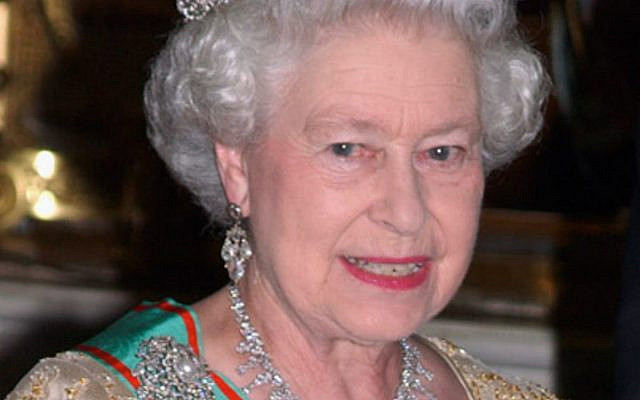 Britain’s Queen Elizabeth celebrates 70 years as Queen today, the longest serving monarch in the history of the country – outstripping two other previous remarkable queens – Elizabeth 1st (1558-1603) and Victoria (1837-1901).  Later in the year, Covid allowing, there will be many events to mark this occasion, not least a four day bank holiday in early June – which is about the time when she celebrates her official birthday. Since Britain does not have an Independence Day,  it is the monarchs’ official birthday which is used as the formal celebratory occasion, when foreign legations around the world host their annual cocktail parties and diplomatic receptions in honour of Britain.

Regardless of whether one is a Monarchist or Republican, one cannot escape the fact that this remarkable lady has represented an ongoing stability in a world which has changed beyond recognition during her lifetime. Even allowing for the instabilities within her own immediate family – not least the strained relationship with Princess Diana and the current problems and rape allegations facing her son, Prince Andrew – she has managed to personally  weather all the storms and remains firmly entrenched as Queen, with a popularity rating in Britain and around the world which supersedes any other political or public figure.

Although in recent years she has slowed down on her public engagements, due to a combination of age (she is 95), the coronavirus and the death of her long time husband and partner, the Duke of Edinburgh just this past year, she appears to be firmly in control. She believes in the Divine Right of Monarchy and will not abdicate as has been the case with many other elderly European monarchs (to most of whom she is related), although she has transferred an increasing number of formal duties to her son, Prince Charles, the next monarch in waiting, who – assuming he is still alive when she dies – will ascend the throne. Forget all the tittle tat of the newspaper gossip – there will be no passing over Charles in favour of his son, Prince William, when that event happens. William will get his chance in due course and will probably end up being King for a long period of time.

Charles was a close friend of the late lamented Rabbi Lord Jonathan Sacks. He was guest of honour at a retirement dinner back in 2013 for Sacks. His opening comments were to the effect that both he and Sacks had been born in the same year that Israel was established in 1948, and that while Lord Sacks would now be able to enjoy a well deserved retirement, he (Prince Charles) was still waiting to take on the main job in his life. 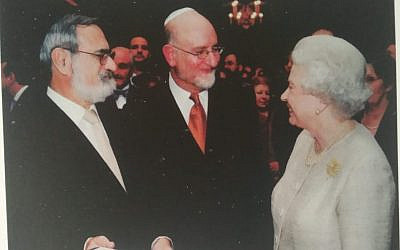 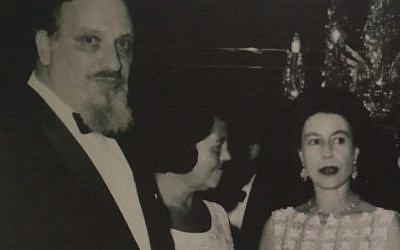 Overall, the Royal Family has enjoyed a warm and positive relationship with the British Jewish community. Chief Rabbis have often been invited to spend time, even weekends, at one of the royal castles and they have always gone out of their way to ensure that kosher food would be available for such visits. I was privileged to be present, back in 1970, at the first formal event of the Jewish community attended by the Queen herself – the centenary celebrations of the United Synagogue – when a guard of honour was drawn up from members of the many Jewish and Zionist youth movements of the time. 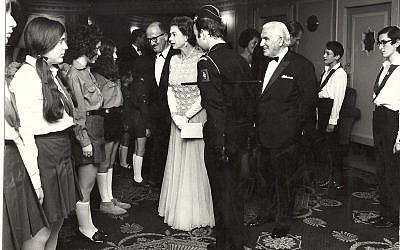 The author in the guard of honour for the Queen at the centenary celebrations of the United Synagogue in 1970. Also in picture Sir isaac Wolfson. Source: United Synagogue archives and private collection of David Newman

In turn, the Jewish community, and the Orthodox community in particular, holds her in great respect. One of the mythical stories told in this regard is that when, in the late 1970s, she toured the country from north to south in honour of her Jubilee celebrations, the Gateshead Rov, Rabbi Betzalel Rakow, – Gateshead being the most important Haredi Lithuanian community and yeshiva in contemporary Europe, located in the north east of England just across the river from Newcastle – announced to his community that anyone who had not in their lifetime had the opportunity to recite the traditional blessing for seeing Royalty, was obliged to line the street as her entourage went by. Moreover, they should also, as a sign of respect for the monarchy, shave, even though the event took place during the period of the Sefirat Haomer when orthodox Jews do not shave as a sign of mourning for the death of Rabbi Akiva’s students.

Some weeks later, as told by the late Chief Rabbi Lord Imanuel Jakobovitz, he met the Duke of Edinburgh at a formal occasion. The latter told him that while touring the north east of England, they had witnessed a group of orthodox Jews lining the street, all of whom were mumbling something as they went past.

In all British communities – from the Orthodox to the Reform – a special prayer is recited every Shabat for the health of the Royal family, the one name remaining constant in the prayer for the last seventy years being Elizabeth herself.  This is recited in far more communities than those who recite the Prayer for the State of Israel!!. Whenever there is a special event, such as a Coronation, a Death or a Royal Wedding, additional prayers and special services are held in most Synagogues, and I have, in my possession, a collection of many of these special Orders of Service going back well over 120 years. Some of these are collectors items, including the plaques which remain in the older synagogues or in the older prayer books, going back hundreds of years and which reflect the changing nature of the British monarchy over time. 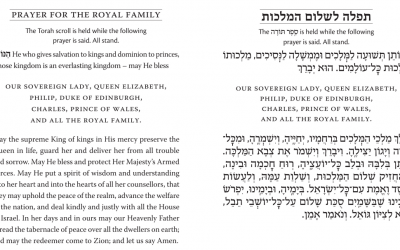 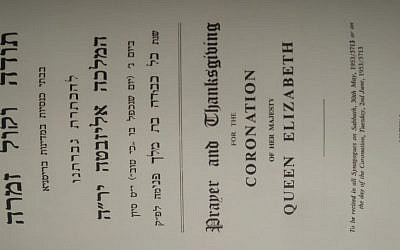 Order of Prayer in Synagogues to honour the Coronation of Queen Elizabeth in 1953 – Source: Private collection David Newman

While the Queen herself has never visited Israel – and there is no chance that it will now happen given her age and cutting down of travel – both her late husband, the Duke of Edinburgh, her son Prince Charles, and grandson Prince William – the two future Kings in waiting – have all paid visits. Charles attended the funeral of the assassinated Prime Minister Yitzchak Rabin, while Philip visited on a  number of occasions, including the grave of his mother the Princess Alice of Greece who is buried in Jerusalem. 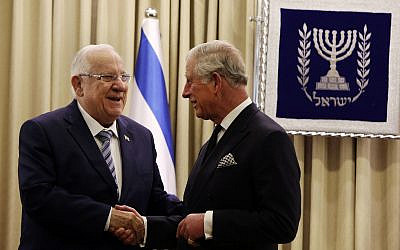 Back in 2013, I was privileged to be awarded the OBE (the Order of the British Empire) for my role in promoting scientific cooperation between Israel and Britain. I was advised that if I definitely wanted to receive it from the Queen, and not from one of the children, I should make sure that I signed up for one of the two ceremonies which take place at Windsor Castle, rather than the many which take place every year at Buckingham Palace. We duly made preparations, invited two of our children (by lottery) to accompany us from Israel, ordered a hotel in Windsor and duly dressed up and made our way to the Castle on the appointed day. Imagine our disappointment when it transpired that the Queen was not feeling too well that day and had asked her daughter, Princess Anne, to step in for her.  The upside was that Anne holds longer conversations with each of the recipients than does the Queen. and I had the opportunity to tell her about the amazing scientific achievements of the Israeli academic community. 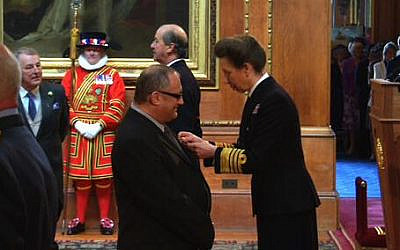 Despite the fact that the line of Royal Succession has now been changed to ensure that a female descendant can be the Monarch even when they have younger brothers – which was nor previously the case – there will not be another Queen for the best part of a century. The next three people in the line of succession are all male – Charles, William and his son Prince George – and it all depends on who will be the first born child of George. The only reason that both Elizabeths and Victoria became Queen was that there were no direct male successors available at the time, Victoria being the only niece of the previous King William IV. while the current Queen was the elder of two sisters, daughters of the late King George VI who came to the throne when his elder brother King Edward VIII abdicated in 1936.

It is to be assumed that during his seven year tenure as the President of Israel, Isaac Herzog will be invited for a formal State visit to the UK (his visit last month was not a formal State visit as such). When that time comes, he will no doubt be hosted at Windsor or Buckingham Castle as guest of the Monarch – whether that will be the current Queen or  the future King to be, Charles, remains unknown. But given her present situation, there is a strong likelihood that the Queen will live well beyond 100 (in which case she will have the privilege of receiving a telegram from herself – as it is customary for anyone reaching 100 to receive such a telegram) and that he will visit where his father, President Chaim Herzog, visited before him. 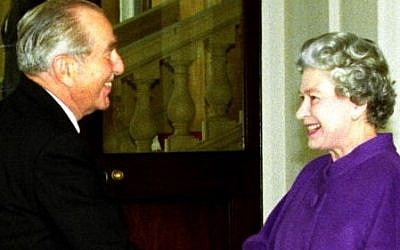 President Haim Herzog on a State visit to Britain – received by the Queen. Source: Martin Keene

The Queen has seen off no fewer than 14 Prime Ministers, from Winston Churchill through to Boris Johnson. She holds weekly private audiences with all Prime Ministers and is informed on al, State matters, including the secret material, but has never once in her long reign let anything slip out. There is probably very little which she has not heard or seen before in the world of politics and international relations. You don’t have to be a staunch Royalist to appreciate the feeling of stability she offers to a world undergoing rapid, perhaps too rapid, change. We take this opportunity of wishing her a healthy Mazal Tov, as no doubt the Jewish community in Britain will do so during the coming months, on this her Platinum anniversary. And in the best of Jewish traditions it is an opportunity to wish her good health biz hundert un tsvantsig.