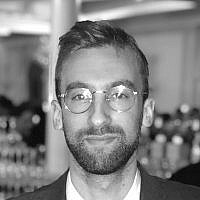 The Blogs
Yonah Diamond
Apply for a Blog
Advertisement
Please note that the posts on The Blogs are contributed by third parties. The opinions, facts and any media content in them are presented solely by the authors, and neither The Times of Israel nor its partners assume any responsibility for them. Please contact us in case of abuse. In case of abuse,
Report this post.

Mazel tov on being awarded an honorary doctorate by McGill at this year’s Arts Graduation. When I first heard that you were one of the recipients for the award, I was impressed by your contributions to the fields of queer theory and feminist philosophy; two areas which move beyond the abstract intellectual discourse to address some of the most pressing social ills of our time.

There has been a bit of an uproar over your receiving an honorary doctorate. Unfortunately, as is often the case with school politics, a very small group of students have made a disproportionate amount of noise and a large group of students have been ignored. In this case, I refer to the Jewish community at McGill, where many Jewish students are simply indifferent to, if not supportive of, your award.

A letter sent to our chancellor and principal on behalf of Hillel McGill and McGill Students for Israel states that your “support of Hamas and Hezbollah is an affront to the values that McGill holds dear as an
institution of higher learning and is offensive.” I agree, this would be highly offensive to me as a Jewish student and as a McGill student. I would join the opposition if this claim was indeed true. The only problem is that it is not. In your response to similar accusations last year, you have already clarified that this accusation is false. I understand that you do not support these terrorist organizations in any way, but rather oppose violence in all forms it takes. I hope that this mistake on the part of the authors of this letter doesn’t work to brand you as someone who is sympathetic towards terrorism.

The real quote that these students and others have jumped on is from a Q and A following a teach-in at Berkeley in which you said, “seeing Hamas and Hezbollah as social movements… that are a part of the global left is extremely important.” Despite efforts to qualify your words, there does not seem to be any reasonable way to defend that statement. I understand why this comment would make one uneasy about your reputation as a role model for students. However, I also understand that it is unfair to use a moment of error to condemn and label someone. The Jewish tradition has taught me the power of forgiveness and highlights human fallibility. Academics, and even honorary doctorates, are susceptible to mistakes. In any case, your position seems to be clearly anti-violence and, I would hope, anti-terror.

I am an executive for the Progressive Zionist Club at McGill, and have served as an intern for our Hillel in multiple years as an undergrad. As an active member and leader in the McGill Jewish community, I consider my voice and the voice of others to have been underrepresented in this case. I have yet to delve into your work in an in-depth manner, but I can already tell that I disagree with some of your views on Israel and Zionism, perhaps vehemently disagree. I can respect those who express disapproval with your receiving the award, but I want you to know that these are not the only representatives of the Jewish community. This award is chiefly for your contributions to the fields of “feminism, queer theory, political philosophy, and ethics.” This work in particular has inspired many of my fellow students at McGill and that’s enough for me.

About the Author
Yonah is a human rights advocate based in Montreal.
Comments