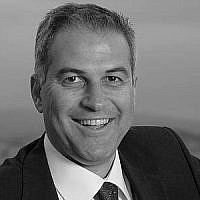 The Blogs
Uri Goldflam
Apply for a Blog
Advertisement
Please note that the posts on The Blogs are contributed by third parties. The opinions, facts and any media content in them are presented solely by the authors, and neither The Times of Israel nor its partners assume any responsibility for them. Please contact us in case of abuse. In case of abuse,
Report this post.

Last night, about 11 PM. Kids asleep. My wife and I had just finished watching an episode of Orange is the New Black (great show, by the way). Turned in for the night, lights out. Quiet. … THUD. A distant but very distinct THUD. “Did you hear that?” my wife asked. My eyes were closed. “Yes, I heard that. Maybe an interception.” I lied. Quiet. … THUD. THUD. THUD. Every cell in my body knew exactly what we heard. In my mind I went back to summer 2006.

I was in a Paratroopers reserve unit. We spent a few weeks guarding the Syrian border, then got marching orders into Lebanon. It was the final push towards the end of the war. Everything is still very clear: the weight on my shoulders (33 kilos/73 pounds), the feeling of my loaded assault rifle, the crunch under my boots. The soundtrack of war. Ours. Theirs. The quick rests and sleepless sleeps. The sound of incoming missiles, the comfort of a good cover. The smell of burnt flesh, a detached arm, flaming truck, charred tank. Helicopters come in, running with the wounded on stretchers. Gunfire. Incoming mortars. The first one long, the second short, the third… .  In two separate incursions we took our positions, engaged Hezbollah, won the battle. We lost men. Fathers, brothers, sons. We stayed in local homes, tried not to do unnecessary damage, not always successfully. Pulled out. It’s been quiet on the Lebanese border since 2006. What’s left? Just me and my little PTSD. It helps me cope.

Today started routinely. Got the kids dressed and ready for kaytana (summer kindergarten) and out the door. Cleaned up the breakfast table. read the news on my Facebook feed. Some e-mails and errands. Rumors started to fly over social media groups. It was bad news. Now we know just how bad.

We did not want this war. We did not choose it. Quite the contrary. Following hundreds of rockets fired at Israeli towns, cities and villages, after accepting a ceasefire (twice) that was rejected by Hamas with renewed rocket launches, after two thwarted attempts by Hamas commandos to attack Israeli villages by sea and by underground tunnels, we had been left with little choice. We are faced with an evil foe. One that cares not for the lives of its own people, deliberately placing innocent civilians in harms’ way, cynically hoping and expecting them to be killed by Israeli fire. We face a cowardly foe. One that hides among women and children. Firing rockets from mosques and children’s playgrounds, that hides weapons, ammunition and rockets in schools and residential homes.

The cost is already high; it may even be higher, unbearably higher. And we will win.

I am no longer a reservist in the paratroopers. My job now is to take care of my family. Provide for their education and wellbeing. Teach my little children how to seek shelter when they hear a siren. Keep them safe so that they will grow and thrive and succeed and feel loved. And one day, God willing, we will no longer look to our borders with concern, worrying about terror tunnels, rockets, suicide missions of death and destruction or a nuclear weapon with our name on it… . That day will come when our enemies will accept, finally and unequivocally, that they will not defeat us. We are here to stay, in our Land. Until then, it’s just me and my (little) PTSD.

About the Author
Uri Goldflam is a licensed Tour Guide in Israel, popular lecturer and educational consultant with a wide range of local and visiting groups. Most recently he was the Director of Development for the Society for the Protection of Nature in Israel and formerly the Director of the Intl. School at IDC Herzliya.
Related Topics
Related Posts
Comments