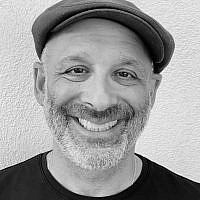 The Blogs
Jonathan Jaffe Bernhard
Apply for a Blog
Advertisement
Please note that the posts on The Blogs are contributed by third parties. The opinions, facts and any media content in them are presented solely by the authors, and neither The Times of Israel nor its partners assume any responsibility for them. Please contact us in case of abuse. In case of abuse,
Report this post.

It is often noted by clergy and animal advocates that Adam and Eve were vegetarians.

This is incorrect. They were vegans, as the Torah teaches: “Then God said, ‘I give you every seed-bearing plant on the face of the whole earth and every tree that has fruit with seed in it. They will be yours for food.’” (Genesis 1:29)

Often overlooked: the animals were vegan too! “‘And to all the beasts of the earth and all the birds in the sky and all the creatures that move along the ground—everything that has the breath of life in it—I give every green plant for food.’ And it was so.” (Genesis 1:30)

The basic idea: the Torah’s reverence for life was such a foundational value that life could not be maintained by taking another creature’s life. Hence both humans and all other animals were envisioned as being vegan.

Fast forward ten generations, following the flood, humans are given the permission to eat meat, “‘Everything that lives and moves about will be food for you. Just as I gave you the green plants, I now give you everything.’” (Genesis 9:3)

How are we to understand this radical change?

Rabbi Samuel Dresner offers one understanding from his seminal work, The Dietary Laws: Their Meaning for Our Time. He notes that the permission to eat meat is a compromise, a divine concession to human weakness and human need. It is as if God says, “I would prefer if you abstain from meat altogether, for to eat meat the life of the animal must be taken, and that is a fearful act. But since you are imperfect, and since your desire cannot be stopped, it must at least be controlled. You may eat meat, but with a restriction—that you have reverence for the life that you take.”

From Rabbi Dresner’s understanding, to keep kosher is to infuse our eating with a reverence for life. This reverence is not limited to self-cultivation but also includes an awareness of the suffering of life. In the eyes of the Torah, eating meat is a privilege based on a divine concession that comes with a condition: reverence for the life you take. This implies that if you do not show reverence for the animal’s life, you may not take it.

Connecting kashrut with reverence for life resonates with many Jews. And this belief leads many Jews and non-Jews as well to assume that kosher food represents a higher level of compassion towards the animal than ordinary meat. To borrow from a well-known marketing campaign, people see products labeled as kosher as answering to a higher authority.

That is no longer true. Today, Judaism’s dietary laws no longer answer to a higher authority but to the modern factory farm system, from which all kosher certified beef, eggs, and dairy found in the supermarket come.

And this system has drained any reverence for life and opened a vast potential for suffering. In its scale, speed, and priorities, the factory farm embodies an utter lack of reverence for the animal’s life from the moment of birth up to and (even when done by a shochet) including the moment of death.

Hence, the very nature of factory farming with its emphasis on efficiency and cost savings creates a system that is by definition a violation of Jewish law. As the former Chief Rabbi of Ireland David Rosen notes: Practices in the livestock trade today constitute a flagrant violation of tza’ar ba’alei chaim, the prohibition of unnecessary animal suffering. These practices include hormonal treatment, massive drug dosing, clipping of beaks and wings, and overly crowded confinement conditions, to name just a few.

Do animal products from factory farms really bear witness to a reverence for life?

Is this what Jewish tradition condones?

All this begs the question: have we lost the privilege of eating meat?

About the Author
Rabbi Jonathan Bernhard is the Executive Director of Jewish Initiative For Animals which helps Jewish institutions align their food choices with their Jewish values. He is a past president of the Board of Rabbis of Southern California, the co-founder of the Valley Chevra Kadisha and the vice chair of the Sandra Caplan Community Beit Din in Los Angeles.
Related Topics
Related Posts