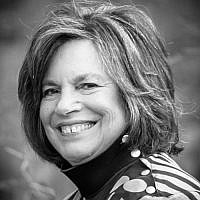 The Blogs
Audrey Axelrod Trachtman
Apply for a Blog
Please note that the posts on The Blogs are contributed by third parties. The opinions, facts and any media content in them are presented solely by the authors, and neither The Times of Israel nor its partners assume any responsibility for them. Please contact us in case of abuse. In case of abuse,
Report this post.

The core of any educational system is its teachers. They are the frontline soldiers in the battle for students’ brains. But the principal is the general who is responsible for the infrastructure, motivating and empowering teachers and students, and mobilizing forces. The principal makes or breaks the school.

AMIT has made hiring the best people and training them to be the best principals a strategic priority. I want to tell you about one of our principals, Motti Arbel. He is atypical, as no two principals are the same. But he is typical of an AMIT principal because of his passion for his work and the students, and the warmth he radiates that permeates the school.

Motti is a bear of a man with a kind demeanor and gentle smile. His softness masks a drive for excellence that he has exhibited in every school he has worked. At AMIT Kiryat Malachi, where nearly 50% of the student body is of Ethiopian descent, Motti was instrumental in raising the bagrut scores from 32% to 80% during the 12 years he was there. Later, in Sderot, Motti stabilized scores, which vacillated between 47-73%, to 87% and are climbing. It is impossible to know what exactly caused the increases, but it is safe to say the emotional climate of the schools, the increase in tutoring hours, and empowerment of both the teachers and students played a role, alongside of creating a culture of professionalism and accountability.

But the stress of turning around subpar schools into winners does take its toll, and Motti described being a little burned out. That was when he became one of 14 principals enrolled last year in a pilot AMIT program called “Tatzam,” Personal-Professional Growth Plans. Tatzam’s goal is to identify and work on challenges and barriers that people experience in their personal and professional lives. The objective is to make them happier and more effective leaders. Motti credits this program with bringing a new energy to his work at AMIT Ashdod Yud.

Ashdod is Israel’s fifth largest city and has a very diverse, multi-cultural population. Motti runs the only religious “makif” (inclusive, co-ed high school) in the city. I, along with a group of AMIT leaders, visited AMIT Ashdod a few weeks ago. As we walked into the building, music played on loudspeakers and the student body was arranged in small groups around individual tables in the hall. Each group stood next to a teacher. A pennant described their subject: veterinary medicine, Emergency Medical Technology (EMT), new immigrant absorption, special education, nutrition, and the list goes on. Literature was provided on each table. Each subject was connected to the broader AMIT values, i.e. Klal Yisrael, Torat Chaim, Excellence, and Reaching Self-Potential.

The excitement, joy, sense of pride and empowerment of these students was palpable. Each student was eager to engage with the visitors. The special education students showed me a game of “chutes and ladders” and explained how their teachers used the game, rather than grades, to measure their academic progress. A new oleh who had come from Iran 3½ months ago, described how even though she was just barely speaking Hebrew, everyone has been so kind to her that she and her brother felt a sense of belonging as soon as they arrived. (She said this in amazingly good English!) The robotics lab was a hive of activity with students running the room and explaining their projects and how they used 3D printers to develop components they could not buy on the street.

AMIT Ashdod is the kind of school we all wish that we had gone to where “chanoch l’na’ar al pi darko, education must be tailored to each students path” is not just a slogan in the AMIT network, it is a fact.

About the Author
Audrey Axelrod Trachtman, is the president of AMIT's board of directors and served on AMIT's board since 2009. She was the vice president of finance and strategic planning for Philip Morris and General Foods Latin America and received the YWCA Women of Achievement Award. She serves on the executive board of directors of JOFA (Jewish Orthodox Feminist Alliance) and on the board of directors of Project Gabriel Mumbai. She is a member of the Westchester Chevra Kadisha, a founding member of Kol Echad, New Rochelle’s partnership minyan, and served on the Young Israel of New Rochelle’s board. She is a CPA and has an MBA from the Wharton School. She and her husband, Chaim, are the parents of Sarah (and Josh), Rebecca and Tali (and Rafi) and grandparents of Leora, Eli, Elinor, Aliza, Noah and Annie.
Comments