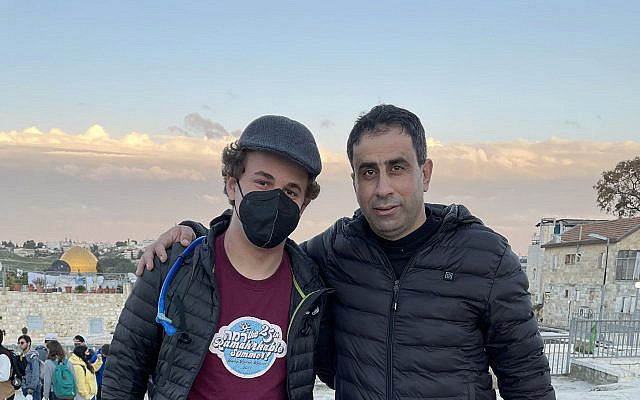 Me with the Palestinian man I met from Hebron in the Jerusalem Rooftops on February 24, 2022. The Old City and Dome of the Rock are visible in the background. (Luiz Gandelman)

I am a Brazilian-Israeli living in the United States, and currently doing a semester of High School in Israel. I have always been Israeli, but this experience of living in Israel for an extended period of time is completely new to me. What is especially new to me is living in Jerusalem. My school, Tichon Ramah Yerushalayim, takes me on Bi-Weekly “Tiyulim” or trips, around Israel or Jerusalem. These trips are led by our Israel Core Course teacher, Miriam. Something unique about Jerusalem that nowhere else in Israel, or even in the world, for that matter, has, is its interfaith beauty. All of Israel and many places in the world are very interfaith, including Brazil where I am from, and America, where I live. The difference, however, is that Jerusalem has major religious significance to all three of those religions, with holy sites for all of them. There’s the Kotel for Judaism, Al-Aqsa for Islam, the Church of the Holy Sepulchre for Christianity, among several other sites. This makes Jerusalem have a very diverse and emotionally intense city, leading to conflict. These factors don’t only lead to conflict, however. They also create a unique beauty that is evident to any Jerusalemite or to any of Jerusalem’s visitors.

As my ICC teacher, Miriam, put it:

Jerusalem is such a magnetized city, because it means so much to so many people. Because it means the world to so many, people have very strong emotions when it comes to Jerusalem, but we have to remember that while this does lead to conflict, that is not it. What we see in the news portrays Jerusalem as a hotbed for conflict and a source for clashes and fighting, but it is much more than that. Jerusalem and its strong emotion have another effect, which is that of unity. While people have their own political opinions and divisions, and there is always conflict of who owns this and who owns that, at the end of the day it is put aside. When this happens, people realize the incredible beauty and uniting power that Jerusalem has and its ability to bring us all closer together out of love for this city.

This beauty and unity present in Jerusalem is especially evident during our last trip, in which we studied Christianity. We visited Ein Karem, as well as The Church of the Holy Sepulchre, among various other Christian sites. We spoke with Friars and tourists, and countless other Christians. That was not the most impactful experience, however. While taking pictures of Jerusalem from the Old City Rooftops, we ran into three Palestinian Muslim men. They sat and watched Miriam tell us about her connection to the Rooftops, and they even told us a little bit about themselves, and agreed with Miriam about the beauty of Jerusalem. One of them was from Ramallah and the other two from Hebron. After a little conversation, most of my group went to take pictures, but I stayed behind. 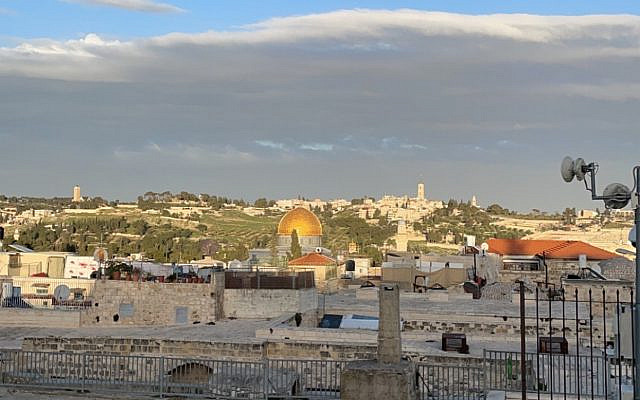 View of the Dome of the Rock from the Jerusalem Old City Rooftops, February 24, 2022. (Luiz Gandelman)

I went up to one of them, whose name I unfortunately completely missed, and began talking to him. He told me his story, and I told him mine. He is a Palestinian Muslim, born and raised in Hebron, in the West Bank. He told me that growing up, he had a very radicalized view on the conflict. He attributes this to what he says is Hebron’s tribal and tense environment. He said there is constant conflict not only with Israeli police and military, but also within Palestinians themselves, divided over beliefs and creeds among other divisions. He also told me that this constant tension radicalizes people, and leads to a rather unpleasant environment prevalent in Hebron. He says this environment leads to hatred, not only at Israel, but among Palestinians themselves. This is what he claims led to his radicalized views in his youth. He told me about the hardships of checkpoints and policing, along with all of the other hardships that come as a result of the occupation. I have never been supportive of the Occupation of the West Bank, but hearing this Palestinian man tell me about his day-to-day experience with the occupation made me resent it even more. My beloved nation, Israel, was doing this to him, his family, and his people. Despite al of this, however, he harbored no hatred for Israelis or even for Israel. He told me that hatred just further deepens the rift, and that is not beneficial to anyone.

Politics wasn’t the only thing we spoke about, however. I told him I was born and raised in Brazil. He immediately smiled, threw his hands up in the air, and shouted “Neymar!”, to which we both laughed. He told me about how he was a big soccer fan. I am not a soccer fan myself, but Being Brazilian automatically immerses you in the world of soccer. He joked about how we would fight since he supported Argentina in the famous soccer rivalry, and I laughed, recalling the jokes me and my Argentinian friends make in regards to soccer. He then told me about his love for Lionel Messi, even jokingly saying that his wife is jealous because he has more posters of Messi than pictures of her. We both began laughing, as did several other people who were present and around us when we talked. We also bonded over food. After all, Israeli and Palestinian food has a lot of similarities. He admitted to not knowing much about Brazil, which resulted in me telling him about my experience in Brazil. When I mentioned how dangerous and unsafe it is, his response was “Like Hebron”.

His response made me think. Brazil was unsafe, but now I live in America. I was able to leave and move to America. He was not. His daily reality was the dangerous reality of Hebron. He told me his dream was to move to the United States, a dream shared by many worldwide, including my family. The only difference, however, is that I was able to do that, and he, like millions of others, wasn’t. He did experience something similar, however. He told me he had been to Dubai, as well as countless places in Europe, which is what he believes led to his open-mindedness and his extensive knowledge. He explained that he spent a few years in France, where he learned a lot about the world. As someone who is currently living abroad, I related to that, and it made me realize how much I can gain from living in in Israel.

Me and some of my friends told him that we were Israeli. To my shock, he said we were very lucky. I do believe I am lucky and beyond blessed to be Israeli, but it was a slight shock that this Palestinian man wishes he had an Israeli passport, despite the fact that Israel has not been as nice to him as it has to me. He speaks Hebrew and knows about Judaism and Israel, despite being a Palestinian Muslim from Hebron. Due to my left-leaning ideologies, I have always studied Palestinian perspectives, and had always known that most Palestinians don’t harbor hate for Israel, but I had no idea that they wish they were Israeli. When I thought about it, it made sense. No checkpoints, equal rights, and countless other benefits come with having an Israeli passport, as opposed to being a resident of the West Bank. We spoke more about the occupation, with him telling me about life with checkpoints and settlements, and walls and soldiers. Despite all of this, however, he was confident that we would have peace. He believed in the good in me and other Israelis, as I believed in the good in him and other Palestinians. We are both sure peace would come, and more than ready to celebrate it when it does.

We also connected over the beauty of the Holy City. Jerusalem.  Al Quds. Zion. Yerushalayim. Whatever one may call it. He pointed to different sites and told me how he loved seeing religious coexistence. Miriam weighed in, using that very conversation as an example. He told me that sometimes he comes to the Old City of Jerusalem simply to see this coexistence and appreciate the beauty of this city we all love so much. Miriam said she comes for the same reason, as she finds peace in the city, especially the Rooftops of the Old City. I am only living in Israel for four months, but I am in love with the Old City. The last time I had been here before this semester was for my Bar Mitzvah. It is a place with large religious significance not only for Jews and millions of others worldwide, but also for me, Luiz.

I talked to this man for maybe five minutes total. The words we exchanged probably lasted the time it takes someone to read this article. This conversation changed my life, however. Hearing his perspectives completely changed my view on everything, and made advocating for peace between Israelis and Palestinians an even more important topic for me. Knowing that there are countless people like him who despite everything, don’t hate Israel, and simply want a better life. I always believed in peace and coexistence, but this conversation supercharged that belief, and only grew my faith in peace. I pray that someday Israelis from Haifa and Palestinians from Nablus can meet for ice cream in Tel Aviv, and go for a stroll around Bethlehem. That checkpoints and terrorism will no longer be a reality. That Israel and it’s neighbors, the Palestinians, will have peace. Most people harbor more love than hate, and we should all take the time to talk to people and better appreciate that.

Me with the Palestinian man I met from Hebron in the Jerusalem Rooftops on February 24, 2022. The Old City and Dome of the Rock are visible in the background. (Luiz Gandelman)
About the Author
Luiz Gandelman is a 16 year old student originally from São Paulo, Brazil, who lives in Miami, Florida. He is currently taking part in Tichon Ramah Yerushalayim. He is involved with multiple Jewish and secular youth groups and political organizations. Luiz is a big basketball and Star Wars fan and an avid scuba diver. He is also a fan of geography, politics, history, and anything of the sort. Most importantly, he is a proud Jew.
Related Topics
Related Posts
Comments