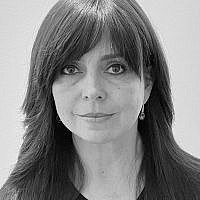 The Blogs
Lisa Fachler
Apply for a Blog
Advertisement
Please note that the posts on The Blogs are contributed by third parties. The opinions, facts and any media content in them are presented solely by the authors, and neither The Times of Israel nor its partners assume any responsibility for them. Please contact us in case of abuse. In case of abuse,
Report this post.

The otherwise joyous festival of Purim is set against the darker backdrop of the concept of “hester panim” (hiding of the face). The face in question is G-d’s and the commentators explain that the absence of G-d’s name in the entirety of Megillat Esther, indicates His concealment from the Jewish People during this ordeal. Even Esther’s name, like the Hebrew word “l’hastir” (to hide) echoes this theme. Megillat Esther is the last book of the Tanach to be canonized and occurs after the era of prophecy, leaving the Jewish people without communication from Gd. A veil of darkness sets in between G-d and the Jewish people and will remain in place until the final redemption. While this can sound depressing, it is still the nation’s role to maintain their faith and bring light into the darkness of exile.

An interesting parallel to this idea occurs in human cognitive development. Swiss developmental psychologist, Jean Piaget (1896-1980), constructed the theory of cognitive development, which explains the nature and development of human intelligence. He observed infants as they grew and began relating to the world around them and he noticed certain milestones in their behavior patterns. One such milestone is that of object permanence. Before a baby reaches this stage, if an object disappears from their sight or earshot, then that object ceases to exist in their minds. So, for example, when a little baby’s mother leaves the room, the mother ceases to exist in the mind of the baby for that moment. This is the reason why the game of peek-a-boo is so enthralling to a baby of this age, because to them, when a face is hidden it is truly gone. When a face is revealed again, the baby senses that something truly magical has occurred. An infant reaches the stage of object permanence when they realize that an object continues to exist even though they are not be able to sense it. I remember watching with interest when my then-baby son’s rattle fell out of his cot. The moment he peered over the edge of the cot to look for it, I realized that he had reached object permanence.

Of course this is not just about rattles and peek-a-boo. It is about an infant developing a sense of self and being able to continue a relationship in absence. They learn that a bond can remain and a relationship can continue even through disruptions. This phase of development is crucial to the health of the infant’s future relationships and, interestingly, to their religious faith later on. After all, without being able to see or hear G-d directly, our relationship with Him is conducted through our faith derived from object permanence.

This concept of holding space for that which is hidden relates to the idea of hester panim in the Megillah. Earlier on in Tanach, G-d would communicate with the nation but this had ceased by the time of the Megillah. Instead of waiting for a peek-a-boo moment, where G-d would reveal himself once again, the Jewish nation had to evolve to the next milestone in faith, the ability to maintain faith during absence. Even though G-d’s face was concealed, Esther and Mordechai led the nation in drawing on their faith to sustain them throughout their encounter.

Although Esther’s name hints at hiddenness, she was also known by several other names, one of which was Ayelet Hashachar, referring to the morning star, the brightest star that breaks through the thick darkness of the night before dawn. This name, in my opinion, lends even greater credence to her role. She was the leader who exemplified how to behave during exile. Despite the concealment of G-d, she continued her relationship with Hashem and led the nation to achieve a kind of object permanence in our faith. She showed us that, with faith, it is possible to shine, even sparkle, in the darkness.

About the Author
Lisa Fachler is a Modern Orthodox woman residing in Raanana with her family. She is a qualified lawyer, a Bradfield Programme graduate (LSJS) with keen interests in Tanach and psychology.
Related Topics
Related Posts
Comments