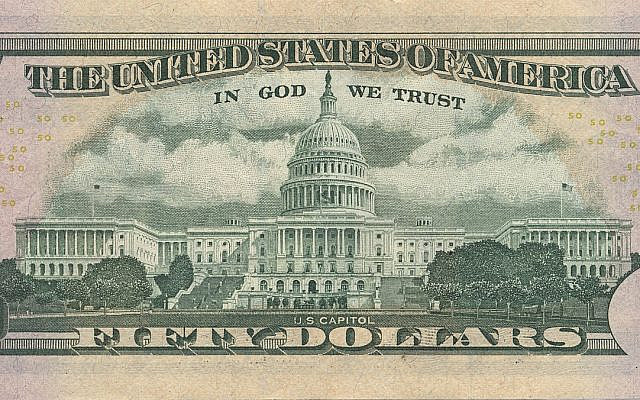 The US $50 Bill with "In God We Trust" Proudly Displayed Above A Full Picture Of The US Capitol Building located in Washington D.C. It is a reasonable assumption that the US Capitol was the primary target of Flight 93 which failed to reach its target during 9/11 due to the brave heroes that fought the terrorists which resulted in saving a countless number of lives.

The discovery I made while researching information for my previous Blog, that Benjamin Franklin once featured on the $50 Bill was a loud wake-up call. So we now have Benjamin Franklin featuring on both the older $50 Bill and newer $100 Bill.

Last year around this time, Omar referred to Benjamin in an anti-Semitic phrase intended to refer to the $100 bill that exists today. But she did not realize that Benjamin Franklin also appeared on the $50 Bill.  That is very important in my opinion, as I want to point out how many times the number 50 has repeated itself in many recent and past stories as it pertains to current events.

The most important story, in my opinion, is contained in Megillat Esther we read on Purim.  In Chapter Five, Esther risks her life to appear before the King, and inform him of Haman’s plan to destroy all of the Jews. The King agrees to see Esther and asks her what she wanted – “Even if shall be half the kingdom, it shall be given to you”.

Esther asks the King to attend her banquet along with Haman, for whom the banquet is being prepared. Haman is very happy to hear that Esther had invited him along with the King to her banquet, but because Mordechai would not show any respect for Haman, this made Haman extremely angry.

Once Haman arrived home, he invited his friends to discuss with Zeresh, his wife, all that he had experienced – his wealth, many sons, and the many times he had been promoted by the King. But Haman was still not happy, because this meant nothing to him as long as that Jew Mordechai was sitting at the King’s Gate.

Haman Follows His Wife’s Advice And Erects 50 Cubit Gallows, On Which, To Hang Mordechai

It was then that Zeresh, his wife and friends suggested that gallows be made to hang Mordechai. And how high were those gallows to be? 50 Cubits.

As Chapter 6 begins, the King was disturbed in his sleep and orders the record books to be brought to him. It was there that the King read it was Mordechai who discovered that two of the King’s chamberlains had plotted against the King, The King asks what honor had been given Mordechai, and when the King discovered nothing had been done for Mordechai, he wanted to make sure Mordechai would be rewarded.

Toward the end of Chapter Six, Haman is dejected, and runs home to tell his friends, advisors and Zeresh all that had happened to him. In response, he is told that if Mordechai is of Jewish decent, he wiil come out as the loser and fall in front of Mordechai.

And of course we all know the final result, that the King was told at Esther’s banquet by Esther about Haman’s plot to kill all the Jews, and also told that Haman had erected 50 Cubit gallows on which to hang Mordechai.

The King became very furious that Haman would even think about doing such a thing, and this resulted in the King ordering that Haman be hung on those very same gallows.

Bernie Sanders is Jewish, and so therefore you might think this has nothing to do with Megillat Esther, and Haman’s downfall, but I disagree. Because Bernie has three of the four squad members on his team who side with the Palestinians against Israel, Bernie is among those who criticize our Government. Because of Bernie’s attitude he deserved to be in for a big shock these last two weeks. And Purim was a perfect time for this to happen to him.

Final results are far from decided as we must wait for all 50 States to hold their primaries, but preliminary polls from those States that have not voted  give Biden a comfortable lead and clear path to the nomination.

During 9/11, The Heroic Passengers Aboard Flight 93 Most Likely Saved The US Capitol Building Pictured Under The Words “In G-d We Trust” On The Reverse Of The $50 Bill

I have written about it in a very early Blog, that Flight 93 most likely was targeting The US Capitol Building before the hijackers were challenged by the heroics of all its passengers, and ended up crashing in a field just outside of Pittsburgh where 11 Jews lost their lives in the deadliest terrorist attack on a Jewish Community in the US. “In G-d We Trust”  continues to act as a shield against any terrorist attack from outside the US Capital Building, and during 9/11, Flight 93 was the only one not reaching its target.

Jersey City mayor: “Gunmen wanted to target next door yeshiva with 50 kids inside”.

“If police hadn’t managed to trap shooters in kosher store where 3 killed, result would have been ‘much worse”,’ says Mayor Steven Fulop; attack viewed as domestic terrorism.

Children were held in the yeshiva of Khal Adas Greenville next to the market.[29][44]

Elementary school children were at the yeshiva attached to the JC Kosher Supermarket, where two shooters armed with a high-powered rifle and shotgun burst in, said Rabbi Mark.

If the shooters had pushed further and attacked the school, there would have been little to stop them, with no security at the building, the rabbi said.

“I don’t have the words,” Rabbi Mark told NJ Advance Media. “I don’t know how they didn’t realize there was a back door, and they didn’t run out of the back door and just do the shooting. It’s a miracle.”

And it was the quick response from the NY Police Dept. that helped saved those children’s lives no doubt, because of the tremendous amount of ammunition the terrorists had. But no time to use it; because the terrorists  were trapped in the supermarket by the Police which is where they died.

On December 12, 2019, US Representative Rashida Tlaib released a tweet on her personal account blaming the attack on white supremacy, which was later deleted.[49]

Two consecutive terrorist shooting attacks occurred at mosques in Christchurch, New Zealand, during Friday Prayer on 15 March 2019.[7] The attacks began at the Al Noor Mosque in the suburb of Riccarton at 1:40 p.m. and continued at Linwood Islamic Centre at about 1:55 p.m.[8][9][10][11] The gunman live-streamed the first attack on Facebook

The two consecutive attacks were the deadliest in the history of modern New Zealand.

The fact that this attack was carried out by the same gunman who had ample time to kill all those worshippers was a tragedy by itself. But to place blame on anyone is making a bold statement, which of course is what some of the Squad members have been doing this past year.

This appears to be the same CAIR function, that Omar made the statement  “some people did something”.

Facts are facts. What we have seen here, using all the above examples, with the exception of the New Zealand attack, clearly shows how G-d can perform miracles and save lives. These are all with the number 50 involved.

Omar was quick to blame President Trump for the New Zealand attack on her people. But it could also be said that her verbal attacks on Israel, Jews and America, resulted in those same New Zealand attacks. She is quick to place blame on someone other than herself, when in fact many times she is the one responsible.

A year has gone by without any word from Omar explaining her marriage history, family history or the many cases of fraud she most likely committed. The Democrats seem to have given her protection which is not justified given their efforts to impeach President Trump.

We all are being affected by the Coronavirus. It is beyond belief that the whole world has virtually ground to a halt. And yet here in Israel, we are all blessed because for the first time in many years Lake Kinneret ‘s water level has reached close to is maximum capacity.

I agree with my son Yaakov, who once told me when he went for a Bracha from Rav Kanyevski, “we just have to be patient and wait for the results”.

May G-d grant us the ability to see the end of his terrible plague very soon.