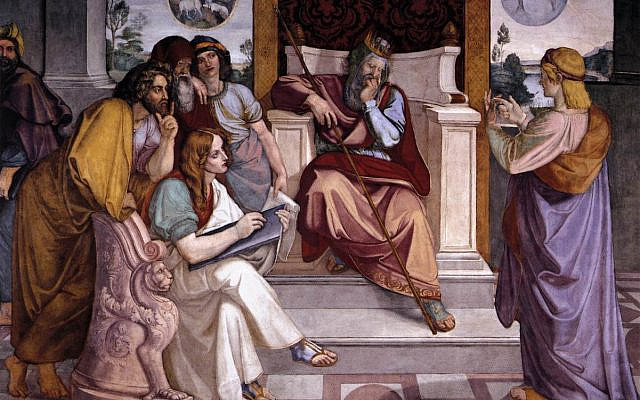 This Shabbat is the rare occurrence when we take out three Torah scrolls – one for the regular Torah reading (Meiketz); the second for rosh hodesh and the third for Hanukkah.  We chant the haftorah for Hanukkah.  For the exact way your shul handles this triple-header consult your rabbi or weekly shul bulletin.

From 2008 to 2015 Simon Baker played Patrick Jane, a consultant for the California Bureau of Investigation, on the TV show, The Mentalist.  His special skill was that he could read people’s expressions and other physical traits and combine this with his powers of observation to help solve crimes.  Before working for CBI he was a stage “psychic.”  He couldn’t really read minds but did a great job of fooling the people around him into thinking he was a psychic.  Jane’s gift reminds me of Yoseph.  Yoseph was able to listen and observe so that he could interpret dreams. Yoseph could probably read a face and even observe increased respiration and heartbeats.

In the ancient Near East dream interpretation [i] dream experiences were reported on three planes 1) Dreams as revelations from the Deity (Ya’akov’s dreams); 2) Dreams that reflect on the state of mind, state of physical or mental health (Yoseph’s childhood dreams); and 3) Manic dreams that seem to be predictions of the future (Pharaoh’s dreams). As a child Yoseph had dreams that had aspects of all three planes. The bowing of the sheaves of grain could be interpreted as a sign for God caused by Yoseph’s mental state and a prediction of future events.  The brothers, who were already jealous of him, could not allow Yoseph to continue to exist in their father’s home.

By the time Yoseph was imprisoned he had honed his skills of observation and worldly knowledge to give advice to the baker and butler that seemed to be dream interpretations.  Yoseph probably knew that sometimes bakers and butlers had duties and responsibilities beyond the kitchen. Egyptian kings frequently obtained advice from their dreams.  Priests were often the conduit for dreams representing God’s messages.  See I Samuel 3:1 ff for details.

The haftorah for Meiketz which would be read when it is not Hanukkah has the story from I Kings 3:20-28.  Two women present themselves to King Solomon saying the baby is theirs.  One solution offered was to cut the child in half and give each woman half a child.  Solomon’s decision is looked upon as an indication of his great wisdom.  Perhaps the skill of Yoseph, King Solomon and our TV character is the same – great worldly wisdom and the skill to read people?

The business lesson is that we need worldly knowledge that is scientific (i.e., measurable and testable) and emotional (i.e., not measurable or predictable) to be considered wise. Yoseph had the God-given skill to pursue and hone his wisdom so that he could help save a nation and his family.