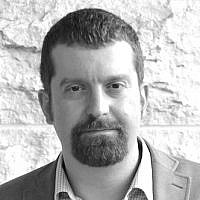 The Blogs
Aubrey L. Glazer
Apply for a Blog
Advertisement
Please note that the posts on The Blogs are contributed by third parties. The opinions, facts and any media content in them are presented solely by the authors, and neither The Times of Israel nor its partners assume any responsibility for them. Please contact us in case of abuse. In case of abuse,
Report this post.

Notwithstanding repeated and urgent attempts by his friend, Gershom Scholem to persuade him to immigrate to Palestine, Walter Benjamin held that:

“Judaism is to me in no sense an end in itself, but the most distinguished bearer and representative of the spiritual.”

Judaism and Zionism were explored over intense discussions together in 1916, when Benjamin criticized Scholem’s championing of “agricultural Zionism”. Their debates over the mystery of language lead Benjamin, at Scholem’s prodding, to begin learning Hebrew. At this stage in his self-exploration, as we learn from Eiland & Jenning’s new biography, Walter Benjamin: A Critical Life,  Benjamin delved deeper into his bibliomania to purchase Fursts’ Hebrew Chaldaic Dictionary of the Hebrew Bible, several volumes of midrash, a bilingual version of the prophets, and a study of Hasidism by Ahron Marcus. This immersion into Hebrew as late as 1929 was also necessary to fulfill the requirements of Scholem and Magnes of becoming a university teacher of French and German literature at the burgeoning new School of Humanities at Hebrew University. In this vetting process, Benjamin affirmed his solidarity with the reconstruction work in Palestine, which he clearly distinguished from political Zionism. While Benjamin’s proclivity to search for a secular-minded redemption fueled much of his writing and reflections, his critical distance remained when it came to nationalism.

Colorfulness, for Benjamin, is part and parcel of seeing the world through the eyes of radical amazement, to absorb the vibrancy of a pluralistic universe one where “the world is full of color in a state of identity, innocence and harmony.” Benjamin intentionally distanced himself from Zionism as he felt its nationalism was diametrically opposed to the potential for Judaism to achieve an international “radical cultural will.”

That same concern of nationalism being diametrically opposed to the potential for Judaism to achieve an international “radical cultural will” is what inspires Rabbi Abraham Isaac ben Shlomo Zalman Hakohen Kook (1865–1935), the first Chief Rabbi of Palestine in Jaffa and Jerusalem, to envision a religio-cultural renaissance for Zion. First serving as the rabbi of Zeimel and then of Bausk (in Lithuania and Latvia, respectively), eventually Rav Kook realized his love for Zion by immigrating to the Land of Israel in 1904, where he served as rabbi of Jaffa until 1914 and then accepted the position of Chief Rabbi of Jerusalem in late October of 1919. Three years later, in February of 1921, he was voted in as Chief Rabbi of Palestine for the Ashkenazim. In those days, the chief rabbinate remained an office shared between Ashkenazic and Sephardic chief rabbis—an arrangement that was in part a holdover from Ottoman times, when chief Jewish religious authority had been vested in the ḥakham bashi or “head sage.” Given that the colonial practice of the British was to rule as indirectly as possible, so the Ottoman system of granting these religious figures authority over personal status issues served their needs. What emerges in this context is a complex web of messianic impulses that preoccupied Rav Kook, intertwining a deep inner search for spiritual refinement with the principle of rectifying the broken world, known as tikkun ha-olam.

“Rav Kook had no doubt that he was living in messianic times, [l]ooking inward, he did not see himself as the messiah, but did understand his own expansive and healing consciousness as profoundly redemptive.”

Comments like these pepper Yehudah Mirsky’s remarkable new intellectual biography, Rav Kook: Mystic in a Time of Revolution and for this reason alone it is a must-read as an elixir to the monochromatic times in Israel we are living through now. As hard as it is to imagine a figure like Benjamin as part of the critical discourse around Zion today, it is even more challenging to imagine Rav Kook as a spiritual voice of renaissance.

The power of the burgeoning Jewish nationalism that marks Zionism is closely linked to the temptation of heresy for Rav Kook, in that most forms of base nationalism tend to be guided by universal ethics, which were in opposition to the specificity of Jewish ethics—and this struck him as morally problematic. In addition, indeed, each of Rav Kook’s main disciples managed tragically to exacerbate this moral problematic intrinsic to nationalism. There is Rabbi Yaakov Moshe Charlap “saw around him a time of cosmic rebirth under the sign of Messiah ben Joseph, an era of purest darkness in which the ontologically vapid gentiles, facing spiritual evaporation, had to try to destroy Israel,” with the result that the entire being of the people of Israel is essentialized to the height of holiness. Then there is Rav Kook’s only son, Rabbi Tzvi Yehudah Kook and his messianic impudence that finds expression in May 1967, in his rejection of the 1947 UN vote to partition Palestine, as he cried out to throngs of his Mercaz Harav students:

“Where is our Hebron—are we forgetting it?! And our Jericho…our East Bank?! Where is each and every clod of earth? Every last bit, every four cubits of the Land of Israel? Can we forego even one millimeter of them? God forbid! Shaken in all my body, all wounded and in pieces, I couldn’t, then, rejoice”

—with the result that the Land of Israel is essentialized to the height of holiness. By raising peoplehood and land to the level of untouchable holy of holies, Rav Kook’s legacy was betrayed—losing, in the process, Rav Kook’s vision of tikkun ha’olam as a macrocosmic, universal vision of his microcosmic, personal piety.

While nationalism is the spark that lights the fire of inspiration here for Rav Kook and keeps Benjamin on his perpetual peripatetic search, what emerges is the need to envision the messianic impulse driving Zionism otherwise. One must give heed to the messianic impulse, as it is redeemed from exile and opens new pathways to liberation for the “the spiritual renaissance of the integral human being.” Seeking a more expansive consciousness, a deeper palette that is able accommodate the messianic impulse,

Rav Kook saw “this auspicious hour of national revival” as a time to see beyond “the entire world is rattling the cries of war,” rather to “… to embrace all creative thinkers, philosophers, interpreters, and anyone who is inspired by the divine spirit and longs for the presence of the Holy Spirit, to come and [self-]cleanse through the depth of thinking in the secrets of Torah, with free spirit, with discernment and blessing, [with] the great logic and the purifying service so exalted and uplifting.”

As he writes in a letter of 1903, for Rav Kook, there are both intra-religious and inter-religious implications in not succumbing to Hegelian “strife of the finite self-consciousness with the absolute self-consciousness”. Whether it is in Rav Kook’s intra-religious discernment of the “myriad of colors and nuances [gavvanim v’hilukim rabim] within each and every word” that distinguishes the ultra-religious [haredi] from religious-Zionist discourse [dati-le’umi] or in his inter-religious dialogue of the aesthetic continuum within the monotheisms: of “nihilism” in Buddhism; of “desolate nomadism” in Islam; and of the “heartfelt Aramaic confabulation” in Christianity, what Kook’s aesthetic contemplation of the holy reveals is that:

“There are many colors [gavanim rabim] of divine desire, of divine manifestation—namely, the color of the One creating, manifesting and blessing—the Holy One.” Within the multiplicity of the divine name itself, Holy One Blessed be [Kadosh Baruch Hu], Kook makes an important observation that: “Blessed be— the source of blessing, the multiplicity of beings, movement of a culture.”

In other words, the mystical nihilism of Buddhism in its aspiration to see the utmost evil and suffering within world and detach from it before the absolute void, drains Being of its fuller “palette of colors”. However, what allows for the “event” of revealing the concealed spirit takes place through the focus of an aesthetic contemplation of all manifestations of existence, including its diverse spiritual aspirations.

So when word of the nation-state bill being considered now in the Israeli Knesset reached my ears in this American Jerusalem of San Francisco—just after concluding a week-long celebration throughout the city of the critical life and work of Walter Benjamin—a melancholia of monochromatic Zionism begins to set in. The proposed nation-state bill by Prime Minister Netanyahu, along with the President of Israel, Reuven Rivlin, and numerous thought leaders in Israel is an attempt to become color blind at best, completely blind at worst. Rather than have the courage and wisdom to continue affirming Israel’s character as a democratic Jewish State in a way that does not relegate Israeli Arabs and other minorities to second-class status, now these colors of democracy are being intentionally muted. The garish hues that begin to emerge form a phantasmagoric image at the extreme nationalist fringe of the nation-state bill’s promoters. Somehow, even after being banned from the Knesset, the followers of the late Rabbi Meir Kahane and members of Lehava have resurfaced—but they will not settle for formulas specifying Israel’s Jewish character and the Jews’ sole claim to national privilege in the state. Lehava’s model for the nationality law is akin to the Nuremberg Laws—to unambiguously preserve Jewish racial purity and to wage war on intermingling through marriages or other relationships between Jews and members of minority groups.

The rich palette of Israel’s colors that were envisioned upon an inspired canvas for a vibrant democratic Jewish state 68 years ago are quickly being whitewashed altogether.

The other color being muted in the palette of the proposed bill is the danger of granting hegemonic rule to one particular denomination of Judaism—namely, Orthodoxy— as defined by a relatively small group of rabbis and politicians-official and permanent State recognition.

The hues and colors of Judaism and democracy, along with a renewed to commitment to a Jewish homeland, desperately need to be re-balanced in a palette befitting its original messianic vision. In his addendum to “On the Concept of History”, with the onset of the Nazi storm cloud and the rumblings of Israeli Statehood in the offing, Benjamin’s reflections are as instructive as they are prescient in 1940 about the heterogeneous rather than homogeneous future of a messianic homeland:

Surely the time of the soothsayers, who divined what lay hidden in the lap of the future, was experienced neither as homogenous nor as empty. Whoever keeps this in mind will perhaps have an idea of how past time was experienced as remembrance: namely, just the same way. It is well known that the Jews were forbidden to look into the future. The Torah and the prayers instructed them, by contrast, in remembrance. This disenchanted those who fell prey to the future, who sought advice from the soothsayers. For that reason the future did not, however, turn into a homogeneous and empty time for the Jews. For in it every second was the narrow gate, through which the Messiah could enter.

For Israel to remain a beacon of hope for all the sentient beings of the Middle East and the world—a true “light unto the nations” — a restoration and enrichment of the palette of all its diverse colors of citizenry is that narrow gate through which the Messiah may very well be locked out. The Jewish coloring of the State cannot afford to turn into the melancholia of monochromatic nation-statehood, rather it needs to return to its messianic aspiration of realizing the impossible—to remain hopelessly hopeful for the re-birthing of a “radical cultural will”.