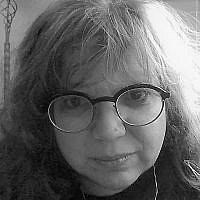 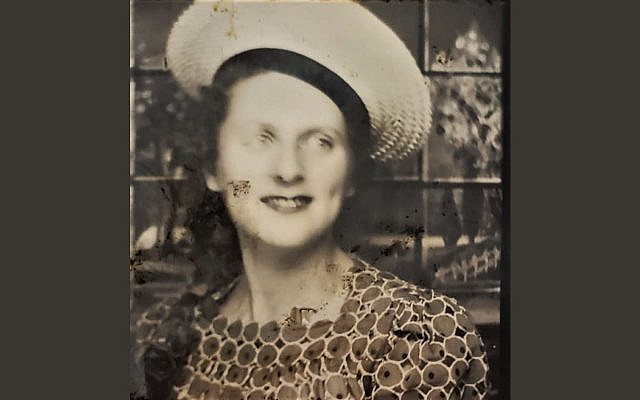 Even in an old, damaged photograph, Aunt Hannah was a great beauty. (courtesy)

She whiles away her time without realizing it, sitting cozy in the home’s sitting room. It’s a good name for it. That’s what they do there, they sit. Hannah doesn’t really watch TV, though it might be on in the background for the others. She can’t really follow it anymore, though there was a time she enjoyed a good show as much as the next one.

She wobbles her head in time to a tune only she hears, and smiles like sunshine on everyone who passes in front of her. Her hair is long and very white. Someone has dignified her for the day by scooping it up into a low bun, and she wears it well. She’s almost a grand old lady, but not enough is happening anymore behind her clear blue eyes. Hannah is beautiful in her dotage, the great beauty she was known for in her youth once more hers. Though it hadn’t been in her middle age. Or not in any way that her relatives noted.

For so many years, she was “that aunt” — her arrival to a family gathering as loud as her dress. That aunt who took the sugar packets home from the restaurant. That aunt who clipped coupons and doled them out to people who wouldn’t use the products they discounted. Her questions were prying, her voice grating, and, too often, she seemed out of step. She meant so well. The children thought she was old, with her stiff grey pincurls and cat-eye glasses of an earlier era — though clearly she wasn’t, yet. And they were awkward around her, or she around them, she who had no children of her own. They found her less charming and less comfortable than the other great-aunts, though no less engaging.

She seemed a perfect match for the husband we knew for a buffoon. The man whose idea of a joke was his misreading the Passover Haggadah (we laughed because he kept on laughing, and wasn’t that funny). The man who became the butt of a joke due to a propensity to get lost, no matter where he was driving. They were a hard couple to love, though you obviously love your family. The children did not know then that he was abusive. That she miscarried — was it his mistreatment? That her brother-in-law eventually insisted she have a restraining order. How much was Hannah masking?

Old age has been a quiet blessing. She doesn’t recognize anyone, not even the Hasidishe girls who come every week to visit the home, to do their scheduled bouts of chesed (good works). She nods and smiles even more when she sees them, though they are not familiar to her. Their visits are truly a kindness, for Hannah is sociable, and the girls are friendly and sweet, never minding that she doesn’t have good stories to tell them. She used to tell a lot of stories, but she doesn’t remember them now, or the telling of  them. She once had a memory for detail, and her accounts of daily events were not for those short on time. Her sister Elinor was a good listener though, and Hannah would call every day, back when she could hear, before the progression of years captured the big sister that Elinor knew.

The day my family and I went to visit Hannah was one of those days when the girls were visiting. We found her in the sitting room, with her long white hair in that bun, her clear blue eyes staring into the room, surveying us newcomers who stepped into it.

We cautiously surrounded her chair. “I’m Neil,” said Neil. “I’m Matthew.” “Sarah.” “And Anne.” We eight cousins, adults now, indicated ourselves in turn. She looked at us, and maybe a little past us, and smiled, bobbing her head. “I’m Alice,” said Alice, taking Hannah’s hand. “I’m Elinor’s daughter.” “Elinor?” asked Hannah in surprise, her voice rasping. “Who is Elinor? I had a sister named Elinor!” she said. But she didn’t remember Alice, or the long existence of Alice, a grandmother in her own right, and she could not appreciate the fact that the woman who had come to visit her was her niece, and the rest of us her sister’s grandchildren.

They told us she wouldn’t remember we had come soon after we left. She lost her memories nearly as quickly as they were made. Maybe she didn’t make them anymore.

But, they said that all of them — the caretakers and the visiting chesed girls — found her to be kind.

Their words gentled what seemed a sad sentence for her. But I think Hannah found her peace there, experiencing the moments as they came, and for the moments they were. If she didn’t have the connections and identity that memory bestows, she also was relieved of its burdens.

Hannah died in 2007, at the age of 96. Before her mind faded, she bequeathed her modest coupon savings to the children and grandchildren of her beloved Elinor. She remembered us with kindness overflowing, before she lost us from her mind.