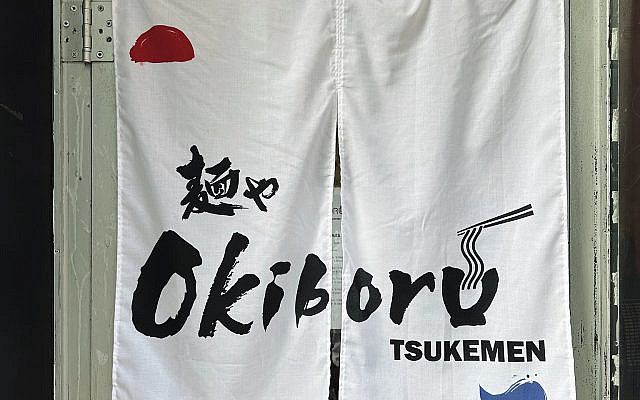 The Israeli body is known as a convergence of disparate cultural limbs. The instantaneous thought, for the sybaritic sort, is that this means good, rich, compelling food. In spite of the undoubtedly good, rich, and compelling variety, there are (for the human New York import) in the Israeli culinary conflux certain luckless omissions. True Italian is one. Japanese is another. There is much sushi, but “much” is not a qualitative term. Noodles have steamed up against our culinary mirror, but it is of the dissipating sort.

In New York, however, the chrysanthemums bloom on Orchard. Thanks to Steve and Reece from 8it food for sending forth this Negev nomad to embark on the discovery of this authentic Japanese fare.

A line outside a restaurant is not necessarily indicative of the value of what’s being served inside. I kept this in mind as I stood in the turgid human formation outside of Okiboru–a tsukemen shop on Orchard, LES—trying to dispel any unjust impressions which might be lent me by the fact. The same went for the expectations a Michelin rating seems to stress. A review begins on a blank page; so, I felt, should my experience. 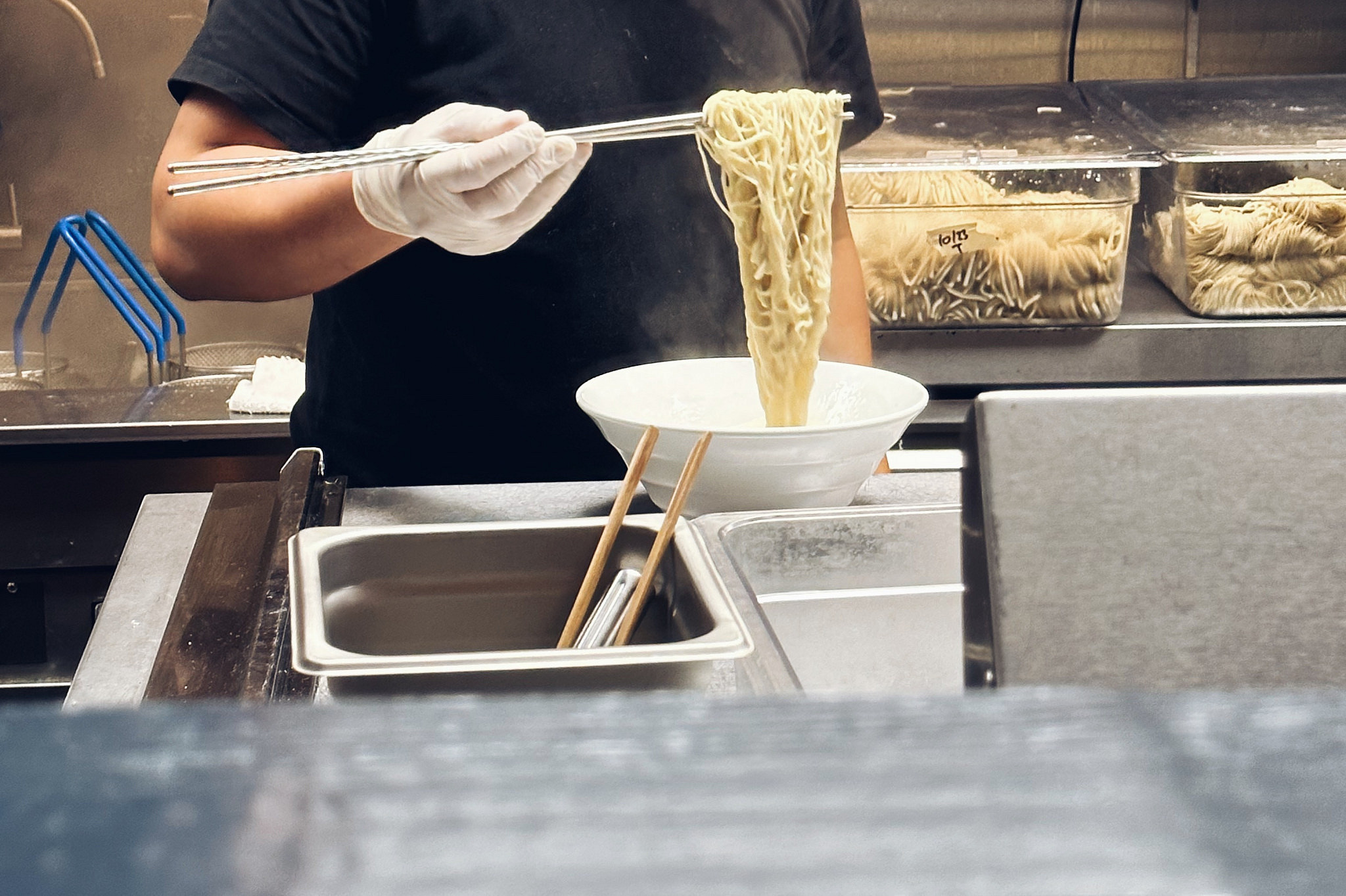 Along with knowledge of the sutra, Buddhist priests, returning to Japan from China, brought noodle knowhow. Yet ramen, which appeared in its primitive 12th century form as buckwheat soba, has since become, next to sushi and sake, emblematic of Japanese cultural cuisine. Tsukemen, on the other chopstick, was conceived 1955, in Tokyo—not by a priest, but apparently, by a god.

The man behind tsukemen, (the tsuke-man, if you will) was Kazuo Yamagishi, the “god of ramen” (with a documentary of his life released under that title). What Mr. Yamagishi called mori soba (“heaped” or “piled noodles”) was first served out of his Tokyo restaurant, Taishoken.

Men, as you may have discerned, means “noodle”. Where in the ra version (ra here meaning “pulled”) the men are already immersed in one’s bowl, in the tsuke variation they are served aside and cold, to be dipped into a concentrated broth while eating (hence tsukemen, “dipping noodles”). The variation may appear, at first, an uncontroversial one, but the effect, in the ensuing decades, was sensational, as I today was to discover. That extra step, having to work for your food, certainly makes part of the fun, and explains part of the curious popularity, of a dish that bevies of devoted people will readily stand outside waiting for.

Hungry or sated, I personally cannot conceive of such zen on any line. “Hangry”, are ya? I get Hexplosive. And not just. I get Hantsy. Hanxious. And, kept waiting for meal or drink (especially the latter), I am near Hout of control. 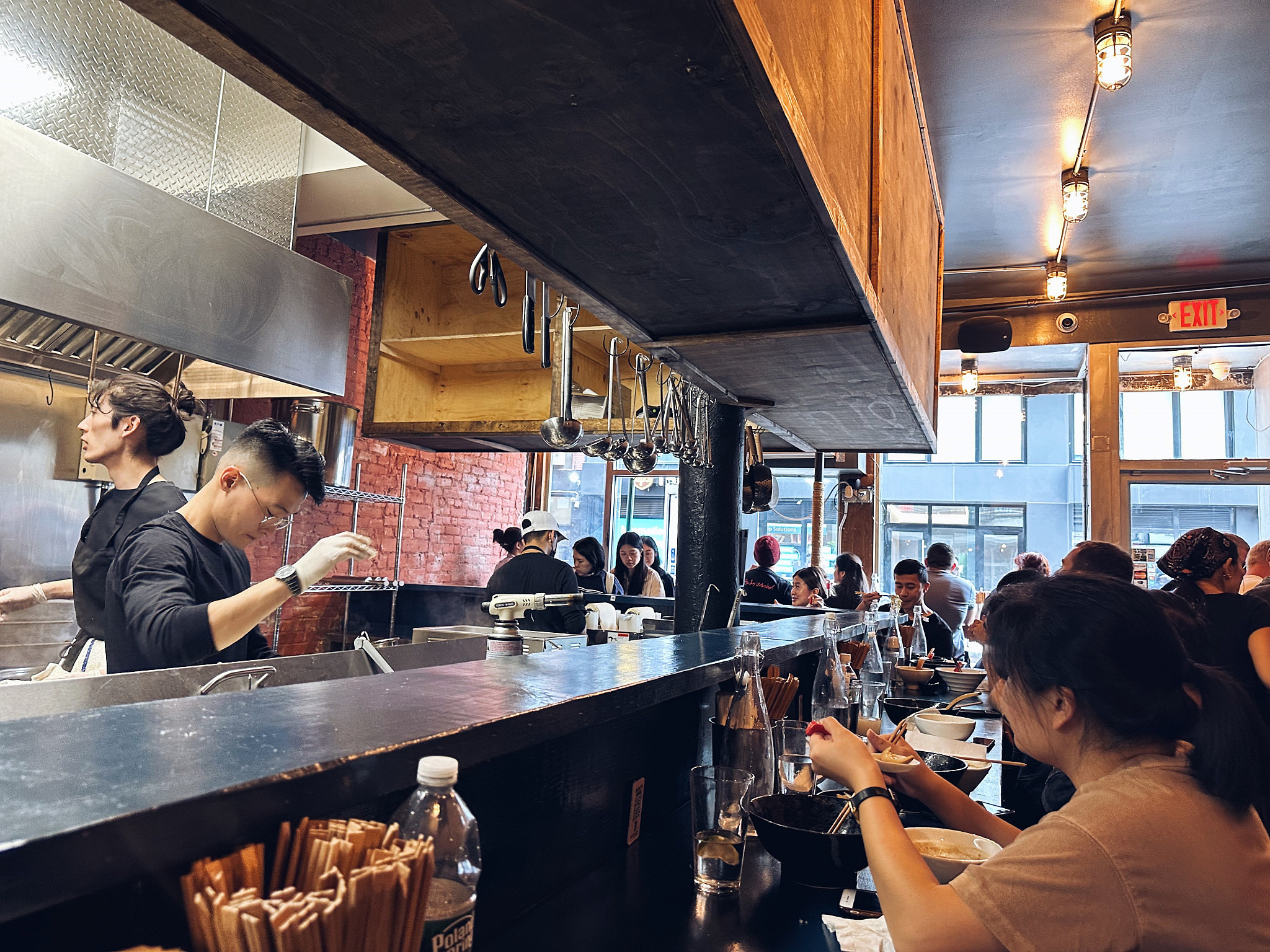 Seated and served, the waitress at Okiboru will indeed ask you, in no mocking manner, if you know how the dish is supposed to be eaten, and proceed to explain to you if you do not. It may sound a simple matter. You have your chopsticks. These you use to pincer up some noodles. Deliver your noodles crane-like to broth bowl, submerge, bring out, slurp up. Spoon for backup. 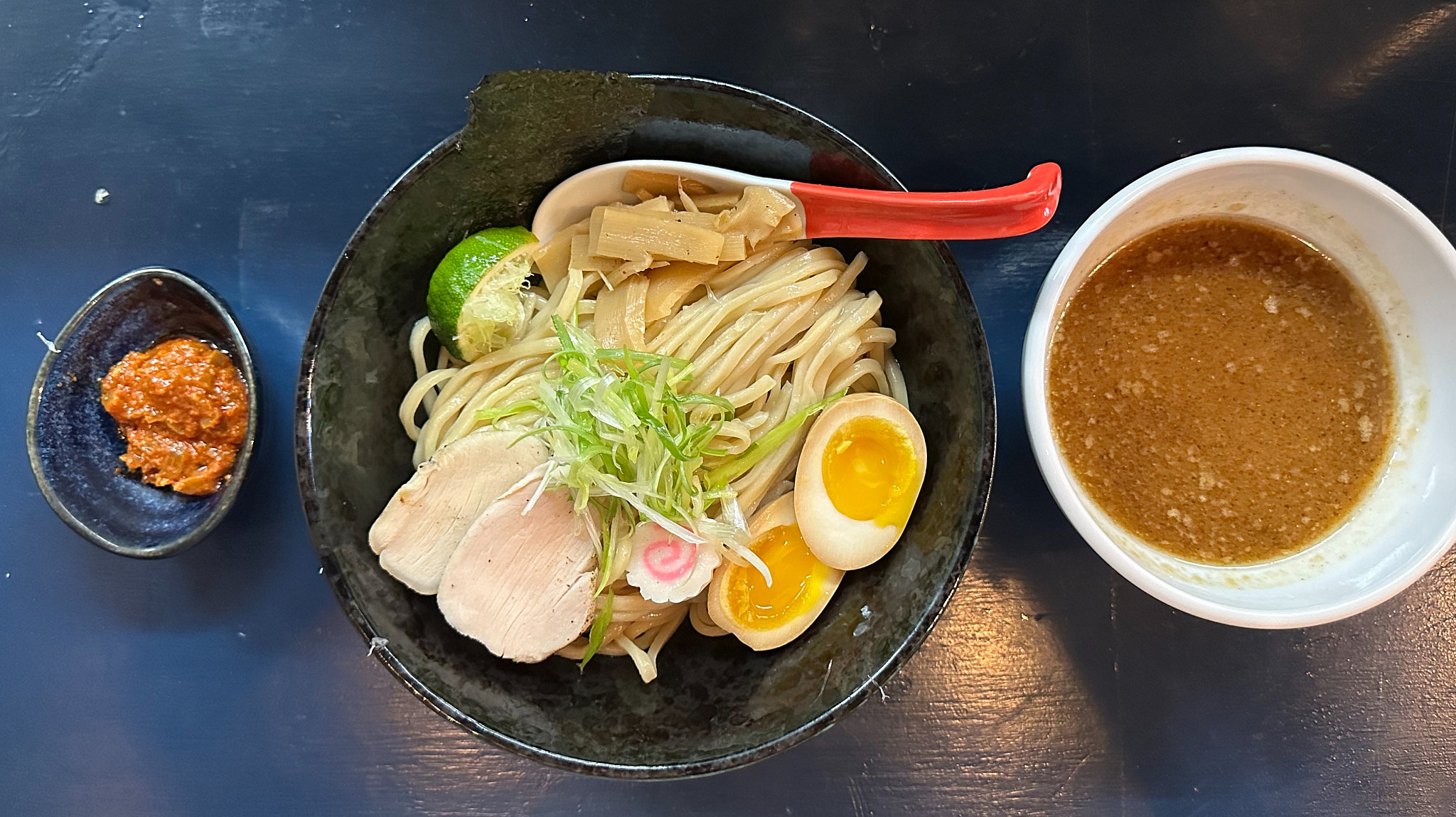 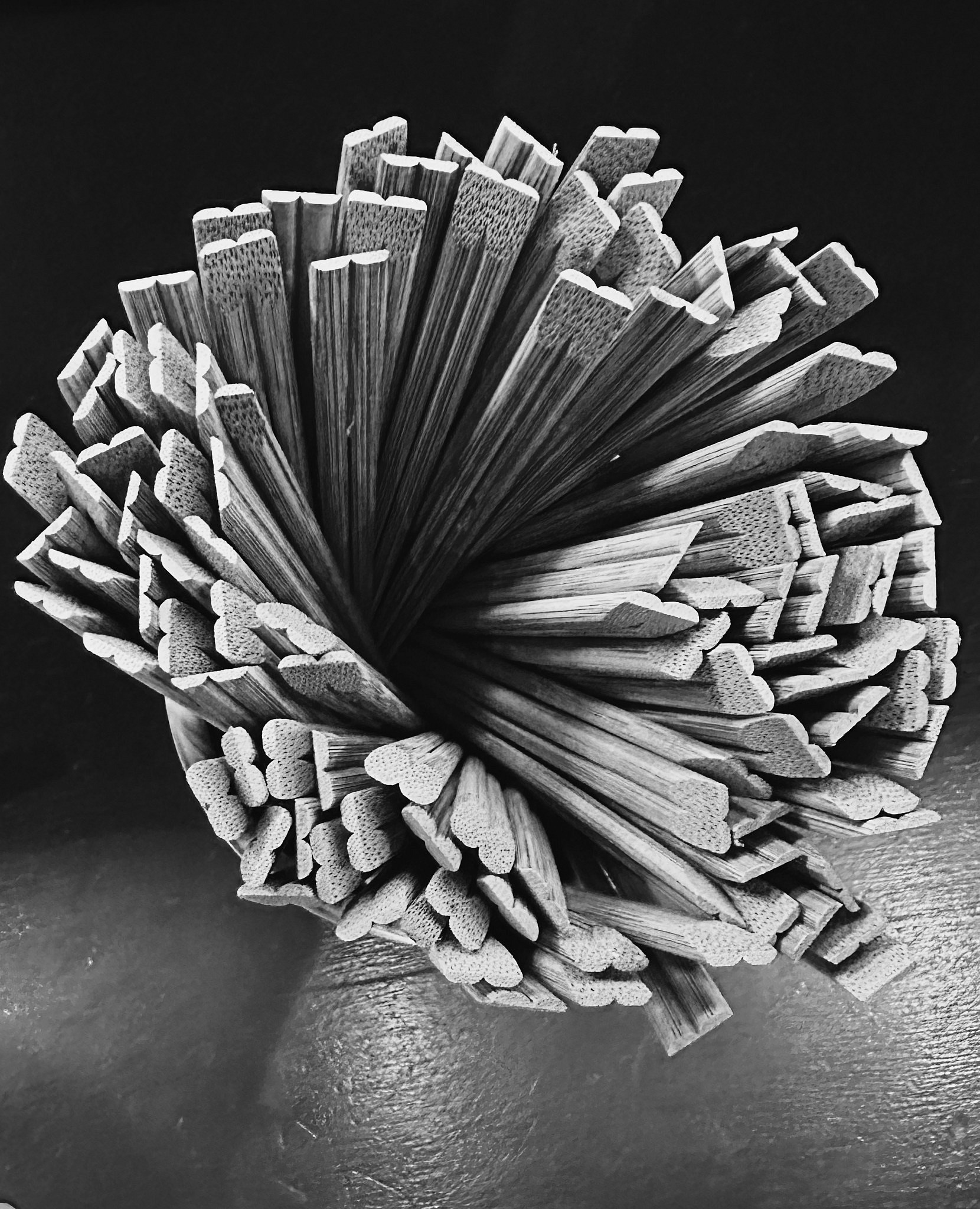 With a stereotypical Western gaucheness which I cannot say I am proud to print, and some doubtless offenses to the national pride, and some possible ones to ancestral deities, I fumbled at each step in this ostensibly painless delivery. No, pie is easier. It is only commendable how much face I lost, while managing to get so much of everything on it.

Oh papi, umami: The agreeable alliance of these two elementally different ingredients (cold/hot; fresh/savory; firm/soupy) tells why you will find, between the hours of 12.00pm–15.00pm (or rather some good time before), and then again from 5.00pm-8.30pm, a devoted assemblage waiting outside of Okiboru’s noren-curtained doors.

This is how it went down, and in every other direction: 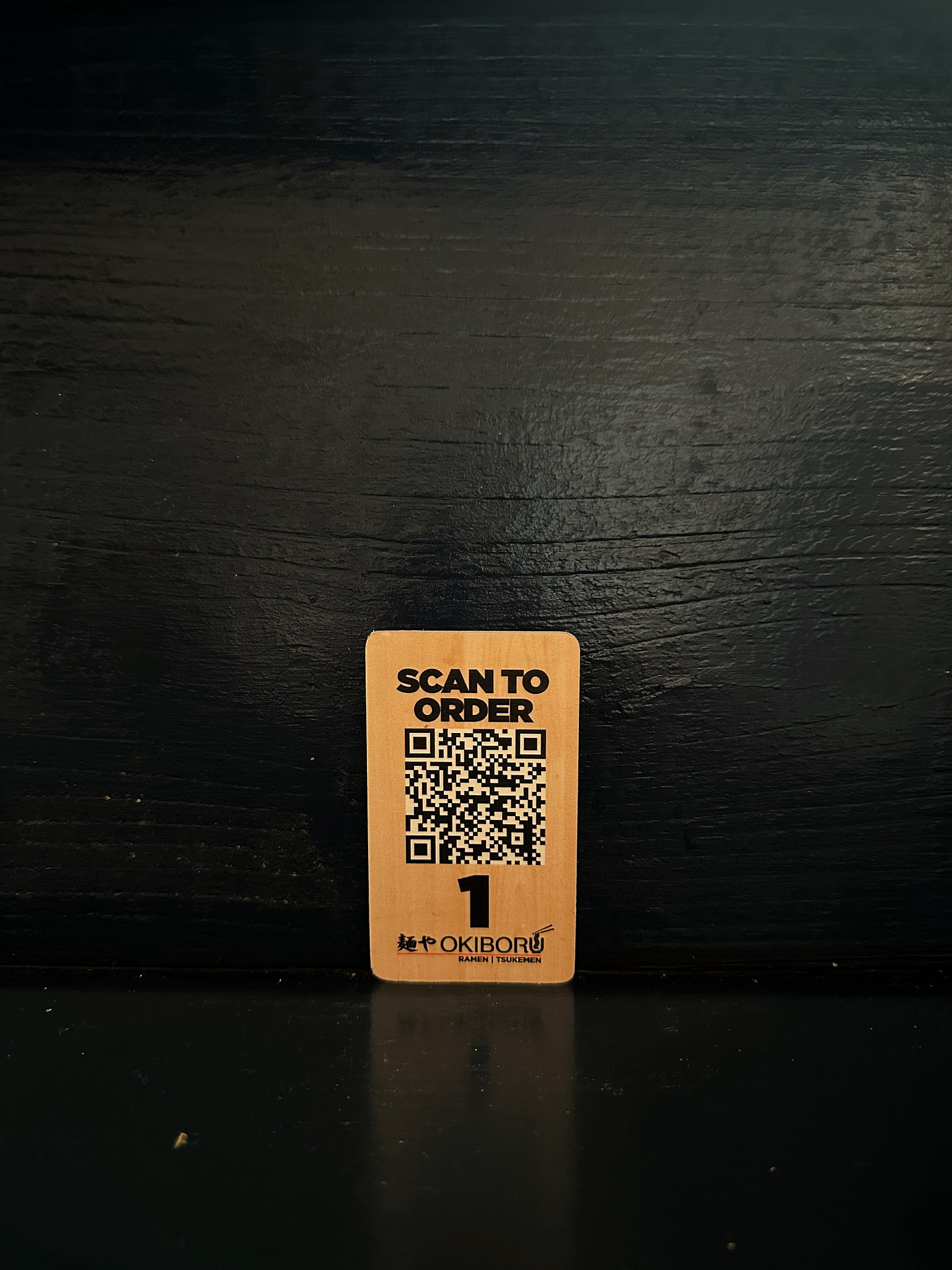 The regrettable tendency is that, as foreign “street food” gets discovered and imported, it undergoes a rapid economic evolutionary process under its new conditions. Low brow fare becomes a highbrow fad. Nosh becomes posh; meek becomes chic, and quite inauthentically pricey.

(Those who find themselves at all disoriented may venture into Russ & Daughters Cafe next door, as I afterward did, for some assuringly familiar, homey, and local East European-imported, expensive immigrant fare.)

I have not had the excellent fortune to visit Japan, and so cannot speak in comparative terms. (*I can, however, attest to the state of the matcha. Avoid it, along with the impression that it is anything like quality-grade for being served from a traditional chawan. A vessel enhances, highlights, perfects, showcases, but does not make the contents. Of the sort boxed and bagged, dustlike, fusty stuff, and a travesty of tea, considering the handful of matcha outlets you can go to which serve the vaunted “ceremonial grade”.)

I can vouch only for the taste, not authenticity, of Okiboru’s tsukemen. Yet in a world which places too much sacred value on “authenticity”, without asking whether a dish can be inauthentically better than it is authentically good, or good in itself, taste ought to be good enough. I believe it is, without believing so much as to want to wait on line again to reaffirm my faith. The line outside, though, is a literally standing testament to the fact of Okiboru’s committed faithful, if you take that as any sort of token.

It seems that to reach the Far East, you need only go so far as the Lower. Just bring a pocketful of yen, and another of zen. 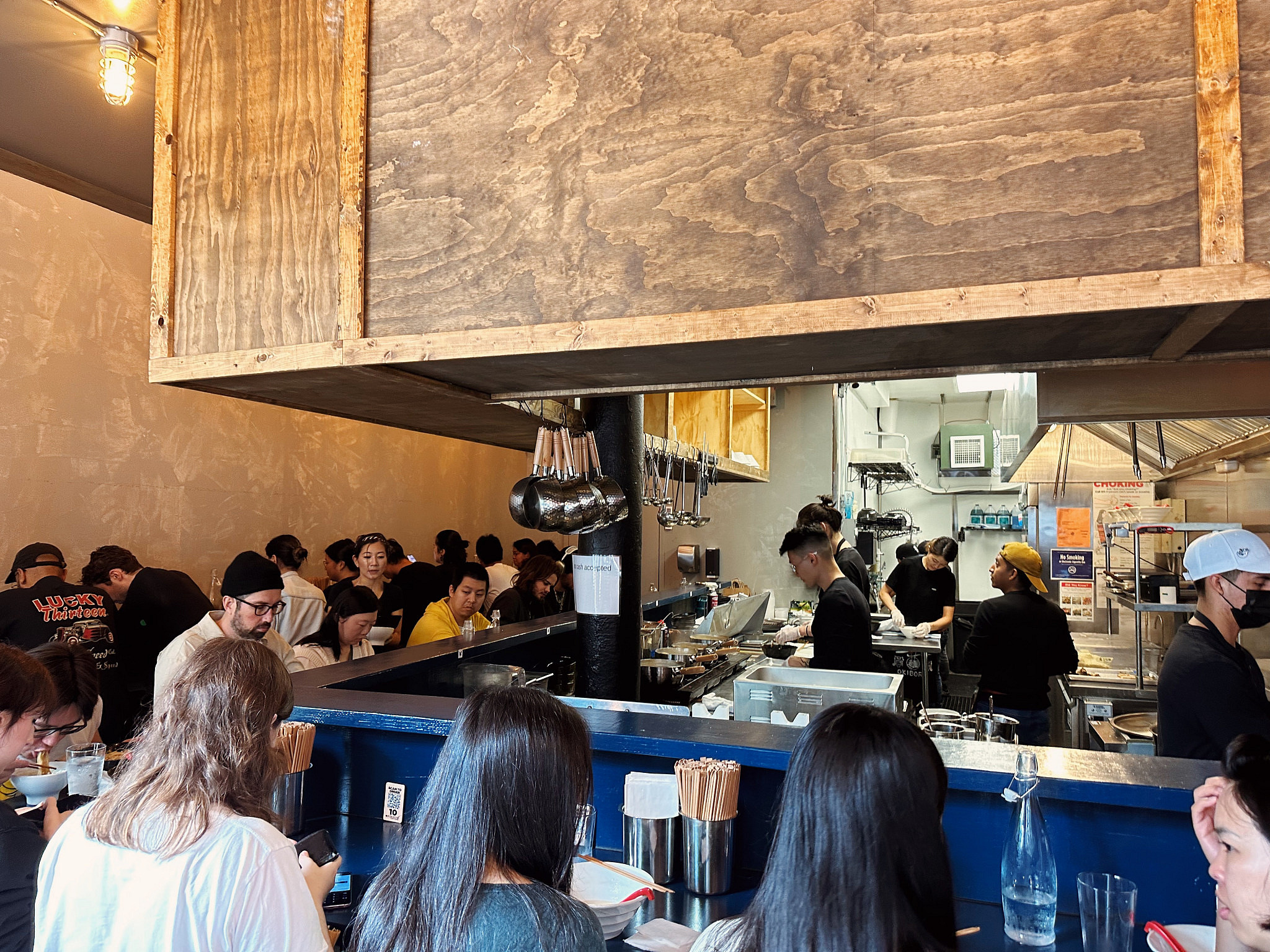 (Courtesy of author)
About the Author
American by birth; Israeli by birthright. TLVivian by residence. By the year, enough of them. Haim, namely.
Related Topics
Related Posts