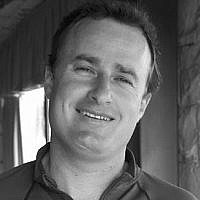 The Blogs
Yaakov Berg
Apply for a Blog
Advertisement
Please note that the posts on The Blogs are contributed by third parties. The opinions, facts and any media content in them are presented solely by the authors, and neither The Times of Israel nor its partners assume any responsibility for them. Please contact us in case of abuse. In case of abuse,
Report this post. 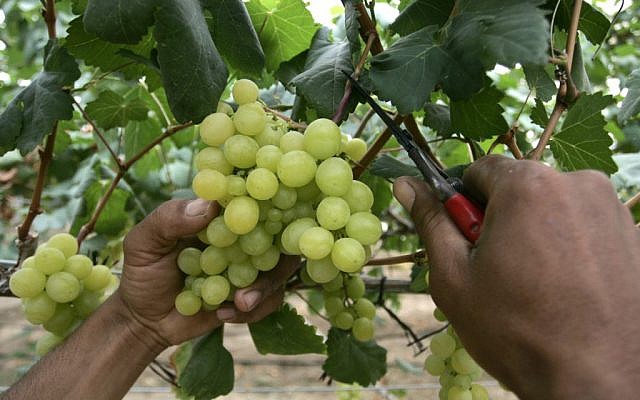 I’d like to tell you a story. It’s a love story about Jerusalem and the land of Israel. And about wine. But it’s also my story. And now, in light of the denial, by some, of Jerusalem’s history, it’s a story that needs to be shared.

In 1979, when I was a small boy, my parents and I fled from Russia to Israel. It was the realization of an ancient dream and my mother often recalled the weeks of hushed trepidation and excitement before our move, the secret plans and how I packed my few toys into an old suitcase.

I was too young to remember any of it. What I do remember is that our escape from Soviet bleakness led us to the arid hills of Northern Judea. We suddenly lived in a place called Psagot – Hebrew for “Peaks”. Young as I was, nothing in those desert peaks felt familiar to me or, truth be told, very hospitable. This was the cradle of the Jewish people, and the soil from which two great religions – Judaism and Christianity – emerged, I learned. But to me it might as well have been the moon.

We adjusted, and I made it home. We had a typical Russian Jewish home: my father was a mathematician and I planned on becoming a lawyer. But this ancient land, where the sun, sky and soil seem to fuse, would not let us treat it like any other place.

I started to think, breathe and dream in Hebrew. My love of the land, my ancient hills and its people burgeoned. After my army service, I went to Australia to help educate young Jews. But as I traveled there, it was I who learned — about what mattered most to me (participating in the rebuilding of Israel), about agriculture and, felicitously, about Australian winemaking. And as so often happens in idealistic times, I met and fell in love with my guardian angel Na’ama – for to call her my “wife” is woefully insufficient.

Na’ama and I came back to Israel in 1999. As I showed her the hills where I grew up, the winemaking I’d learned traveling Australia came rushing back. I recalled that Psagot was 900 meters above sea level – a good place to grow fruit, I’d been told. Its soil was unique. It had abundant sun, promising slopes and a good breeze. What had seemed a collection in random facts in Australia now had a purpose.

By the end of our conversation, we had decided to plant seeds.

Na’ama and I wed. I studied for law school at night and improvised myself into a farmer by day. We were penniless, but in love. And so, a tiny old American train car that we found on a nearby hill would become our first home. The plaque on it said 1942. While other train cars from that time brought millions to their death, this one would be our modest home and where we started our family. With painstaking love and attention, Na’ama turned the cold metal car into a warm hearth. It was perfect Israeli alchemy: turning hardships into blessings.

Wine for the ancient Temple

It was while Na’ama and I were walking the hills at sunset one day that the land truly started to speak to us. As we talked of the future while examining our new crops, we came upon a hole in the ground. It was filled with mud, but we could see that it had once been inhabited. With our hands, with spoons, with the careful devotion of a doting parent, we carefully emptied the hole of its debris. What we had discovered was no less than a cave from biblical times. Inside, we found pottery shards, coins with grape leaves embossed on them, and a 2000 year-old wine press. As if our ancestors had wanted there to be no doubt, we also found a coin from 68 CE that read in letters I immediately recognized: “Lecheut Ziyon” – for the liberation of Zion.

Our home, it turns out, is where wine for the ancient Temple in Jerusalem had been made. The cave is where the grapes were pressed and stored. “This is not a coincidence, Yaakov!” I remember Na’ama telling me, with child-like excitement in her eyes. “We dug and found ourselves!”

There are few things as compelling as feeling that you are where you belong, doing what you are meant to do. And it was suddenly extremely important to us to make wine in Psagot once again. Like the pioneers who had built our country, we were poised to revive millennia-old history! We would be making the wine that the Maccabees, Rabbi Akiva and the rebels who fought Rome might have drunk. And in pure Israeli style, we wanted it to be something old-new. We would match the most advanced techniques to the most ancient tradition. We didn’t just want to make wine with meaning, we wanted it to be among the best, too. 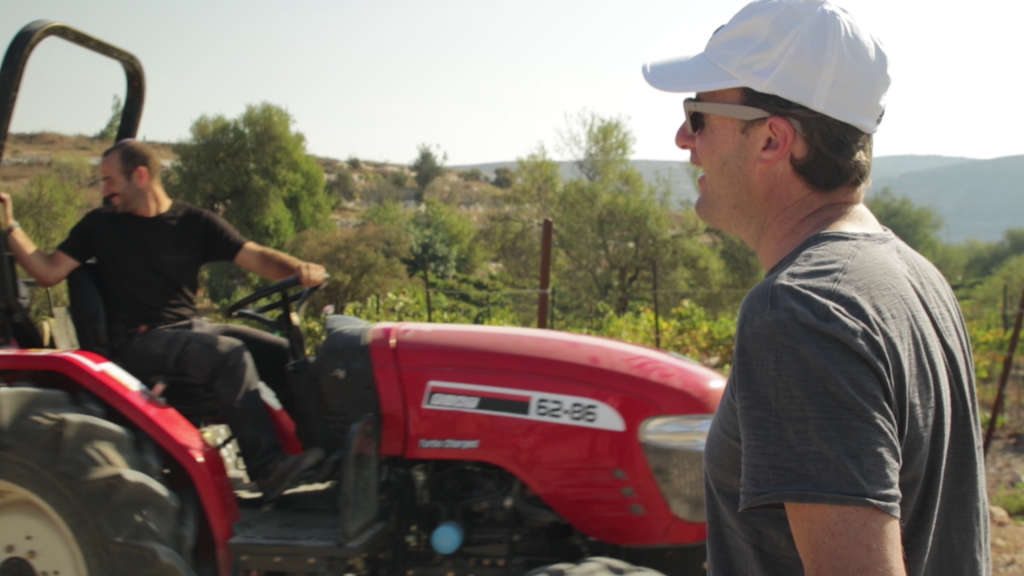 It was us, our car-home and a dream. With our own hands we painstakingly restored the ancient terraces on our hills and replaced our crops with vines. We worked tirelessly and with the least of comforts. Of law school, I saw only the inside of exam rooms, for I was tilling and pruning as others argued torts and property law. In between long stretches working the soil, I did random legal jobs and worked security. This was during the second intifada, mind you. I saw terrible things. I worked 22-hour days, until I was dizzy.

But amid all of these challenges, we were propelled by passion and purpose, a drive to revive our past, these Judean hills and to shape the future – to give Israel a wine it would be proud of. When you live for something greater than yourself, trials seem like dares. And those years, however difficult, were the happiest I ever knew. We were young, consumed by love for our work and for each other. We had the wind of Israel behind us, that wind that turns dreams into monuments. Most of all, we had purpose. We were home.

In 2003 we had our first harvest — 3,000 bottles which we distributed to friends and family. We doubled our output every year after that.

By 2005 I was invited to a competition for best Israeli wine, and agreed to attend almost half-heartedly. I watched as the winners were announced. The custom was for winning vineyards to donate thousands of shekels to the event organizer. I secretly thanked the heavens that we stood no chance because, happy as we were, we were still penniless.

They called out third place. Then second. And then first. I was dazed when I heard that “Psagot 2004 Merlot” won. I thought it was a joke. I went up to the stage, stuttered words I will never remember, and made my way down excited and flushed. And then we won again – for our blended wine – and a third time, for our Cabernet Sauvignon! I was amazed and emotional. And I had to make a donation that I couldn’t afford! So I donated 180 hours of my already scarce time as a volunteer – something the competition had never seen before. After so long buried in the dust, our Peaks were impatient to show off their bounty, it seemed.

The special blessing in this harvest

Like our vines, like our young state, we grew. We built our family home next to the cave, on the spot where the vineyard servicing the Temple stood over 2,000 years ago. This plot of land, this stairway to heaven of ancient terraces our forefathers had built, this old-new vineyard that had won prizes we could not even afford. This was where we were meant to be. And we wanted to share it with the world.

And so, Christian and Jewish volunteers flocked to our terraces to be a part of this magical rebirth. We housed 60 souls in our home – people who collected their life savings to come and help and whose happy devotion infuses every drop of our wine. We have dozens of Arab friends working with us for years now, as well. We partake in their celebrations and they in ours. We all work together, nestled in this special place, driven by our desire to connect people to the soil and to each other through our wine.

And we grew our family as well: Na’ama and I have three beautiful children, born of these ancient hills and intimately connected to them. My five-year-old drives the tractor behind me as my oldest son and I get to know each vine, each bunch of grapes, every nuance of this art. How far I am from those plans of being a lawyer. How much closer to myself.

Psagot now produces 300 thousand bottles annually and has won more awards than we can remember. Every day we rise, grateful to be able to revive an ancient winemaking tradition with the most sophisticated tools, to make the best wine possible. Every day since that walk with Na’ama, we have remembered how blessed we are to be able to give life to the past, and to actualize the hope of generations of the Jewish people. Every day we are driven by an appreciation for the fact that our work brings joy to people everywhere. And that we are sharing our home with the world.

Martin Luther once said that “Beer is made by men, wine by God.” There’s a special blessing in this harvest, in this soil, in the ancient wine from our hills. Nothing that men in suits say in faraway plenaries can change that.

About the Author
Yaakov Berg is CEO of Psagot Winery.
Comments