David Ben-David, a Holocaust survivor, a fighter and a pioneer, was buried yesterday at the age of 98. His life story can be told through his tallit, which went through everything with him. Here is the story, in three acts:

In 1939, Nazi Germany invaded Czechoslovakia. Young David saw the Great Synagogue of the city engulfed in flames, and around it Nazi soldiers singing, cursing and throwing religious articles into the fire. “I felt that my heart break,” he said. “Suddenly, not far from me, a tallit was flung. I took it and ran away.”

In 1941, David survived the concentration camps and tried to make aliyah to the Land of Israel. After months of arduous sailing, he reached the shores of the Land, but the English, who ruled here back then, wanted to drive the illegal immigrants away from Israel. In a spur of a moment, David and a friend of his jumped out and swam with great effort to the shore of Haifa. They were saved, but the “Haganah” (Jewish paramilitary organization in the time of the British Mandate) bombed the “Patria” boat, in which the British gathered the illegal immigrants, and many were killed in an event that came to be known as “The Patria Disaster.” When the English sent divers into the depths of the sea, David’s cargo was surprisingly found. The tallit returned to him.

1947. After he fought in the ranks of the Jewish Brigade and helped with the rehabilitation of Holocaust survivors in Europe, David returned to Israel, and became a commander in the battles over Gush Etzion. In the War of Independence, he was injured and fell into Jordanian captivity. Before the Gush fell, he managed to smuggle the Tallit out to Jerusalem, to his wife. “The Jordanians burned and destroyed all synagogues and religious articles in Gush Etzion, and only the Tallit survived”, he said. “For me, it symbolizes our eternity.”

After 1948 he was one of the founders of Nir Etzion (a religious Moshav in Northern Israel), and on the wall of his home he hung the following saying: “When our strength is over, we enlist the power of our will.”

Hundreds accompanied him last week on his last journey, as he was wrapped in his Tallit. 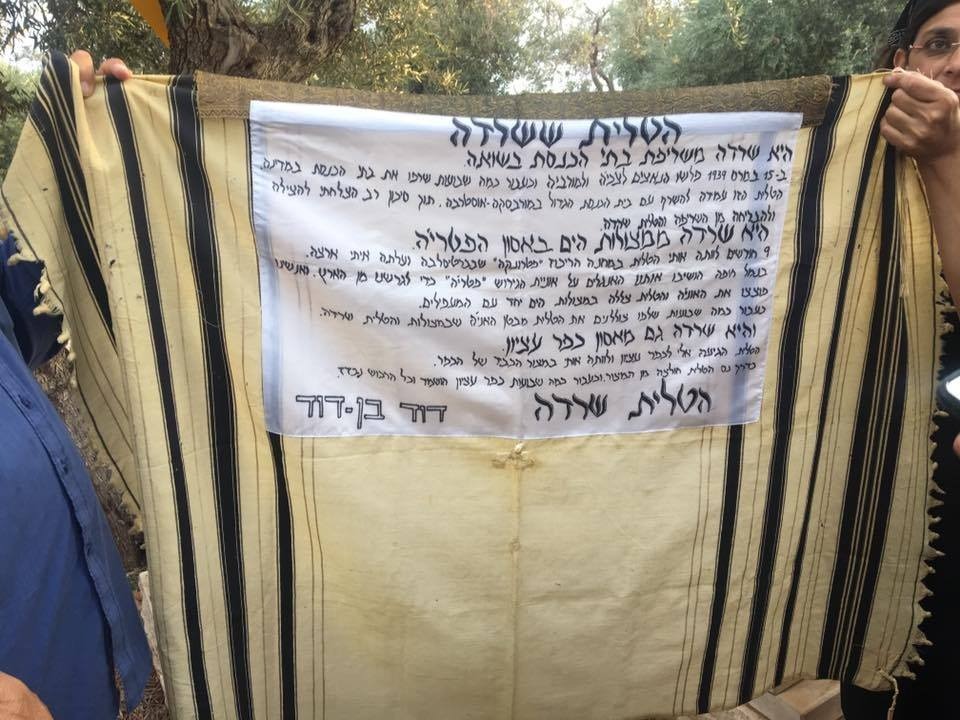 With tremendous thanks to Sivan Rahav Meir on sharing this incredible journey. Reproduced with her permission. Comments welcome.