I’m a member of a Modern Orthodox synagogue, and I attend Shabbat services and Hebrew and Talmud classes regularly. So why was I standing in a muddy field outside Houston on a freezing New Year’s Eve, officiating at a Christian wedding, as I wore cowboys boots emblazoned with the Lone Star? And what’s up with the pregnant longhorns in the cattle pen?

Therein hangs a story of religious evolution, family love and the search for a Jewish gift for a Christian couple.

The marriage united my brother Cooper’s son Travis and his fiancée Amanda. They live in Houston and announced their wedding in September. At the time Travis texted Cooper, “Is Uncle Van a preacher?” reflecting his awareness of my Jewish involvement and religious interests. Travis and Amanda wanted me to officiate at the wedding, which they set for New Year’s Eve, 2014. The place: the Wallach Ranch, Cooper and Travis’s 10-acre spread in suburban Katy, which Travis and Amanda stocked with two pregnant longhorns, cats, ducks and seven black Labrador retrievers. 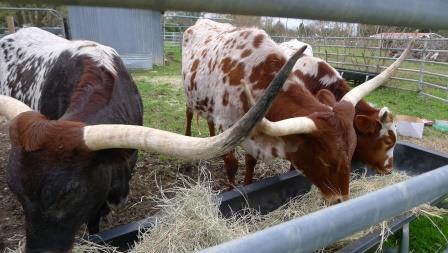 Rambler, Claire and Bogart enjoy some hay at Rancho Wallach.

Their gesture surprised and touched me as a way to connect us all as a family. Cooper and his wife Dianna have lived in Houston since 1981, while I’ve been in the Northeast since I graduated from Princeton in 1980. We’ve gone our own ways in religious matters, too. While my brother and I had Jewish parents, their divorce and the pressures of living in a small town three miles from the Rio Grande in deepest South Texas led us to attend the First Baptist Church of Mission, Texas as kids. In high school, I switched back to the Jewish team, while Cooper remains Christian. We respect each other’s beliefs and leave religion to others.

With New Year’s Eve approaching, I had two big tasks. First, I had to become a recognized minister. Second, I had to learn what Travis and Amanda wanted—and decide what, if anything, I could or should do to slip some of the family’s Jewish heritage into the wedding.

First, I completed my online ordination with the Universal Life Church Monastery, made a modest payment and soon had my ministerial materials. Next, I considered the Jewish angle. I had combined Texas and Jewish themes at my own wedding in 1989. True to my Texas roots, the first song played by the klezmer band was “Waltz Across Texas” by Ernest Tubb, a dance hall classic that a sentimentalist like me wallows in while remembering loves won and lost. I tend to do that still.

While I fantasized of cowboys lifting the bride and groom in chairs and twirling them around to “Hava Nagila,” or leading a cheer of “Mazel tov!” I kept these staples of Yiddishkeit to myself. I suggested stepping on a glass at the end of the ceremony, a very traditional ritual. Before I left for Houston, I bought them a Jewish housewarming gift for the home they were rehabbing at the Wallach Ranch.

After I arrived in Houston on Christmas Day, Cooper took me straight to Wallach Ranch. The pond, the rustic supply shed and the sheer acreage impressed me, but the stars of the ranch are the longhorns—two pregnant females, Rambler and Claire, and a male calf, Bogart. nothing prepared me for their sheer BULK, especially figuring in those wicked horns.

“Go ahead, Van, get in the pen with them,” Cooper urged me. I did, with some reluctance.

“Grab their horns, see how strong they are,” Cooper said. I gingerly laid a hand on one of Rambler’s horns. When she shook her head, I felt like I had my hand on the cannon barrel of a tank. I respected Cooper’s ease around the feisty pregnant females; me, I’m just an East Coast wuss. 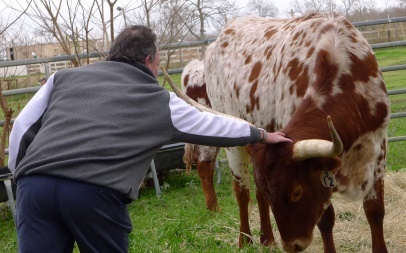 Cooper shows he’s got the right stuff for ranch living.

Amanda and Travis and a crew of rugged, lanky Texans straight out of “Lonesome Dove” worked non-stop to finish the preparation. The ceremony and party would be in a white tent, complete with walls and heaters, in the pasture. Houston’s weather didn’t cooperate, with buckets of rain falling for days, so they spread hay on the ground under the tent to keep guests from sinking into the muck; my girlfriend Naomi quickly jettisoned the idea of wearing heels.

Thinking about the ceremony text rattled me. I could easily knock off generic vows, like, “Dearly beloved, we are gathered here today to unite this man and this woman in the vows of holy matrimony.” That’s the Gettysburg Address of love – everybody knows the words. But I wanted to do what Travis and Amanda wanted, so long as it didn’t clash with my Judaism. Fortunately, Amanda said they wanted something short and simple, nothing to induce bawling. That was a good start. As a professional writer, I specialize in tight and bright prose for any assignment. Wedding vows—yeah, I’ll write those!

Two days before the wedding, Amanda emailed vows another couple had used. I saw the familiar quote from the New Testament’s First Corinthians, chapter 13, about “love is patient, love is kind” but she wrote, “We are taking out the Corinthians section and the parts where Travis and I are supposed to repeat after you when we exchange rings. We’re simply going to put the rings on each other while you say the part about what the rings symbolize.”

The vows were perfectly nondenominational and would fit right into any belief system that wasn’t too picky about references to its specific Deity. That I could live with.

Before we left for the ceremony, Cooper delighted me with a gift of Durango boots decorated with the Lone Star flag of Texas. With those on, I’d fit right in with the other boot-scooters in Katy.

At the ranch, Naomi and I sprinkled more hay in the tent. Beer and wine cases stood ready to meet the guests’ refreshment needs. The bridesmaids gathered in their smart maroon dresses, looking adorable and practical in their cowgirl boots—who needs heels in a Texas cow pasture?

These cowgirls don’t have the blues.

Getting from the house to the tent raised some logistical issues. It was dark and the field was slippery with mud. Also, the pasture typically hosted longhorns with certain bodily functions, not wandering wedding guests. With country-life smartness, the groomsmen hitched a wagon to a tractor to transport the guests to the tent.

I practiced reading the vows from my smartphone and found my rhythm. When the moment came, I stood in front of the guests, flanked by the maroon-clad bridesmaids and the groomsmen in their grey suits and natty red bow ties. My nephew Tyler, who, like me 30 years earlier, had moved from Texas to Brooklyn, was Travis’s best man.

I took the microphone. Travis and Amanda stood in front of me. Well, I thought, let’s get this show on the road.

The audience grew silent. Experience from my other open-mic gigs at literary cafes kicked in. I began,

We are here to celebrate the marriage of two special friends. More than a ceremony; this is a significant moment of celebration and personal commitment. The essence of this commitment is the taking of another person in their entirety, as a companion and a friend.

It is therefore a decision which is not entered into lightly, but with great consideration and respect. From this day forward you will come closer than ever before. You will promise to love one another in sickness and in health, for better and for worse, but at the same time your love for each other will give you the strength to stand apart, to seek your unique destinies…

I got a special thrill out of the last part, where I announced,

By the power vested in me by the laws of the State of Texas, I now pronounce you husband and wife! You may seal your vows with a kiss! I present to you all for the very first time as husband and wife, Mr. and Mrs. Travis and Amanda Wallach! 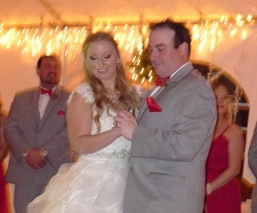 Travis and Amanda taking to the dance floor.

After I presented and they kissed and the guests cheered, I heaved a sigh of relief. Cooper later congratulated me on a smooth, authoritative maiden voyage in this marrying business, noting he had never heard me do public speaking (he never heard my open-mic gigs at New York’s Museum of Sex, but that’s another matter).

The partying began, with the dancing, the photos, the speeches, the ice-filled containers of Lone Star beer, the DJ spinning music. Rather than “Hava Nagila” and “Bei Mir Bistu Shein,” the partiers kicked up their boots to “Cotton-Eyed Joe” and “Sweet Home Alabama,” Instead of the embossed kippahs common at Jewish weddings as take-home mementos, this one had camo beer cozies with the phrase, “Something old, something new, something from us to hold your brew.”

Before we left in the earliest hours of 2015, Naomi and I gave the couple the Jewish gift I selected for them—a silver mezuzah for the front door of their new home. I chose the mezuzah as a double sign of continuity. Beyond its ancient Jewish meaning, this particular one came from the designer who made the mezuzah I have on the front door of my apartment, a gift to me from Naomi. These bits of continuity are like the Hebrew phrase l’dor v’dor—from generation to generation.

As Amanda, a most energetic bride, wrote on Facebook on New Year’s Day, “Thank you for our Mezuzah. I’m definitely putting it next to the door. I’ll take all the blessings in this crazy house we can get!”

I’ll leave the last word to nephew Tyler, another Texas exile in Brooklyn who has already picked up the local lingo. He wrote, “L’chaim!”

And that’s how it goes, from generation to generation, y’all. 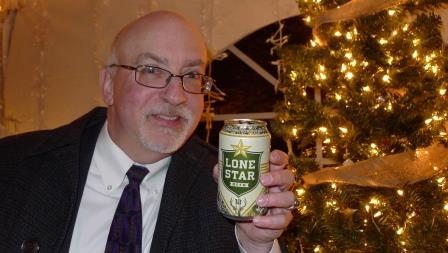 Getting in touch with my roots at a most un-Orthodox wedding.