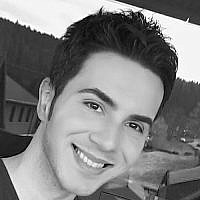 The Blogs
Luka Neskovic
Apply for a Blog
Advertisement
Please note that the posts on The Blogs are contributed by third parties. The opinions, facts and any media content in them are presented solely by the authors, and neither The Times of Israel nor its partners assume any responsibility for them. Please contact us in case of abuse. In case of abuse,
Report this post.

Some years ago, while I was doing a research for my upcoming biography on Michael Jackson, I did an interview with Jackson’s old associate, director and choreographer Vincent Paterson. In early 1997, Jackson asked Paterson to work with him on the music video for his new single “Blood on the Dance Floor.”

“Look, I’ll do it for you”, Vincent said to Michael, “if you promise that you’ll show up for rehearsals.”

Michael made a promise which he did not entirely keep. He came only to one rehearsal and thus caused much trouble to Vincent, because the complete choreography could not be performed without him. It has happened several times that the dancers who were enthralled, waiting for the King of Pop to come to the studio, at the last moment were told that he would not come.

“I was a little disappointed with what happened with ‘Blood on the Dance Floor’”, says Paterson, “because I created a lot of choreography for him there and he kept canceling, canceling, canceling rehearsals and only got to show up, I think basically, for a day and a half of rehearsals. So much of what I had planned I had to cut out, and I let him improvise in a lot of places because he wasn’t around to learn choreography, so I had to change things for him.”

This improvisation turned out to be incredible. Michael’s spontaneity in dance and unplanned moments were the central parts of the video. He gave in to the rhythm of the music and allowed it to dictate his moves. He also danced salsa with his partner Sybil Azur; he was rarely seen on the dance floor with a partner.

Paterson chose Azur himself; having worked with her earlier, he knew that she would be perfect for Jackson: “She was thin and beautiful like him,” and they worked very, very well together.”

At the end of our conversation, Vincent reflected on his understanding of the difference in Jackson between the eighties and the nineties.

“In the younger years“, he said, “when he was stepping away from the Jackson 5, he had a lot to prove. All of the sudden it was him by himself and not all the brothers around him, and he was stepping into the shoes of the superstar; really a superstar. By the time, 10 years later came around — I think it was probably he realized that he had been moved into a place that wasn’t what he may be expected — that he realized the freedom that he had lost — he realized the prize that you have to pay for fame. And also at the same time, I think that he took a little bit of advantage of the opportunity for himself. If he felt like staying home and playing videos with Macaulay Culkin — he would do that. Now at the same time, he was always generous, so he would be sure that if he cancels the day’s work, everybody was paid for that day. He would never do something to hurt anybody’s situation, but if he felt like he wanted to take a day off and do something, I think he probably believed that he deserved to have that. And the truth is he probably did. He was one of the hardest working people I’ve ever met in my entire life”.

Jackson became a father in the same year, and that represented a turning point in his career. His job was not the most important thing anymore. From this time on, he rarely appeared in public and was on a hiatus several times. Parenting became a priority for him, whereas music was on the second place. Everything he did from then on was subject to fatherly obligations because, as he himself said on several occasions, he did not want his children to live the same way he had; he wanted their childhood to be different than his. He understood the importance of the presence of a parent and of upbringing, and seeing his colleagues, he realized how the parents’ fame and lack of proper upbringing can affect the character development of the children.

Besides, he also wanted to rest from all the work. He had a successful career behind him, he had fulfilled many of his dreams, all of it before turning 40 years old. His future did not demand a big commitment to his job like it had been the case before. He was still creative and worked on his music, but was not as present in the public like before.

About the Author
Luka Neskovic is an author, and columnist for The Huffington Post.
Comments