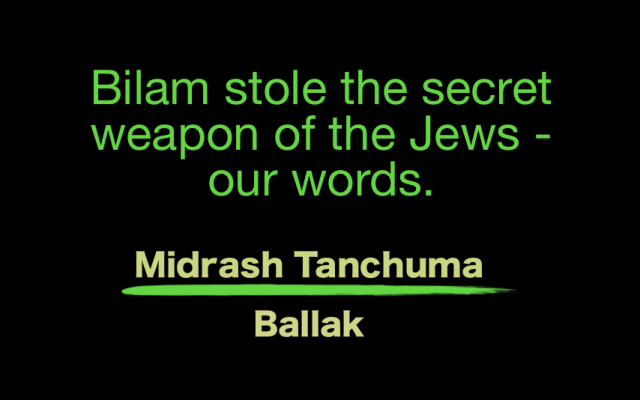 As you recall from the outset of the Parsha, Bilam suffered the great indignation of not being able to see what his donkey could see –  an angel blocking the path. This was the first of several attempts by God to communicate to Bilam that his perception was skewed.

When Bilam was finally allowed to “see” as well, the angel appeared with a sword. Midrash Tanchuma wonders why the angel would need a sword.  After all, an angel can surely do harm without a sword. Case in point, the dramatic story in Kings II when Judea was surrounded by 185,000 Assyrian troops. No sword was needed. An angel destroys the entire army and King Sennacherib retreats back to his home in Nineveh in shame.  (II Kings 19:35-36)

Weapons of choice for intractable foes

Midrash Tanchuma spells out the message that the angel was trying to send Bilam by holding a sword. It’s based on an episode in Genesis when Yaakov dressed up like his brother Eisav to receive Eisav’s blessings. Yitzchak, who was blind,  recognized that the person presenting himself as Eisav had the voice of Yaakov but the (hairy) arms of Eisav. The Rabbi’s saw in Yitzchak’s  famous expression of bewilderment a powerful prophetic vision.  It defined the secret weapons in the never ending struggle between the Jews and their adversaries:

“The voice is the voice of Jacob but the hands are the hands of Eisav” (Genesis 27:22)

The world may be involved in an “arms” race but Jews have prayer.

Yet here we are with the Jewish People under attack and our adversary’s weapon of choice is the spoken word. So in holding the sword, the angel was pointing out that Bilam was using our weapon:

Now that you are trading off your craft (weapons) and coming against them (the Jewish People) with their craft (prayer), I also am coming against you with your own [craft].”

Bilam was told that he can’t win against the Jews with speech – the weapon of the Jews. Furthermore, Bilam’s demise will come through the sword. In fact, at the beginning of  Parshat Matos, (Numbers 31:8), Balaam is indeed killed by the sword.

It’s impossible to know if, despite all his prophetic powers, Bilam got the message. It seems like his hatred of the Jews and his greed for the great bounty he was going to collect as a hitman, once again, clouded his vision.

The good angel that was a victim of a smear campaign

The Midrash gives another example of Bilam’s total misperception. It’s based on the unusual use of the word  “Satan” in our Parsha. (The verse is difficult to translate so I am using the translation of RASHI)

“The angel of God said to him, ‘Why have you beaten your donkey these three times? It is I who came out as a (satan) adversary, because you were anxiously traveling against my wishes.” (Numbers 22:32)

Despite the fact that the angel was holding a sword, this was a good angel sent to do what good angels do – save people from doing bad. However, according to Baal Mamorim, a commentary on the Midrash,  our verse is referring to the fact that Bilam accused the angel of being Satan. After all, what does Satan do? Satan prevents you from performing kind, righteous acts. In Bilam’s mind, what righteous act was he trying to do? He was trying to curse the Jews. It shows just how twisted Bilam’s moral compass was.

At the end of the day, Bilam learned the hard way that you can’t use the secret weapon of the Jews against the Jews.

Can we see any better than Bilam?

This begs a question we have to ask ourselves. Do Jews know that despite appearances to the contrary, the secret weapon of the Jews is not the iron dome or cyber warfare, it’s prayer.